Firework displays will be hit by winds tonight amid weather warning

Firework displays will be hit by gales of 80mph tonight, with power cuts and travel disruption expected for millions of people, forecasters warned.

The Met Office has today issued yellow weather warnings for parts of Scotland including Central, Tayside and Fife, Grampian and the Highlands – which means that severe weather is expected and could cause delays to road, rail, air and ferry transport.

West to northwesterly gales will reach 80mph in the more remote areas. Coastal routes, sea fronts and coastal communities, including in and around Aberdeen, will be affected by spray and large waves as the winds spread eastwards. Temperatures are expected to drop as low as -6C (21.2F) by the end of next week in parts of Britain during a deep freeze.

Forecasters warned: ‘In combination with high spring tides this is expected to lead to large waves around the coasts. Winds gradually easing through Sunday afternoon.

‘These very strong winds likely to result in some travel disruption and dangerous coastal conditions across northern and eastern Scotland. It’s believed bus and train services will be affected, with some journeys taking longer.’ 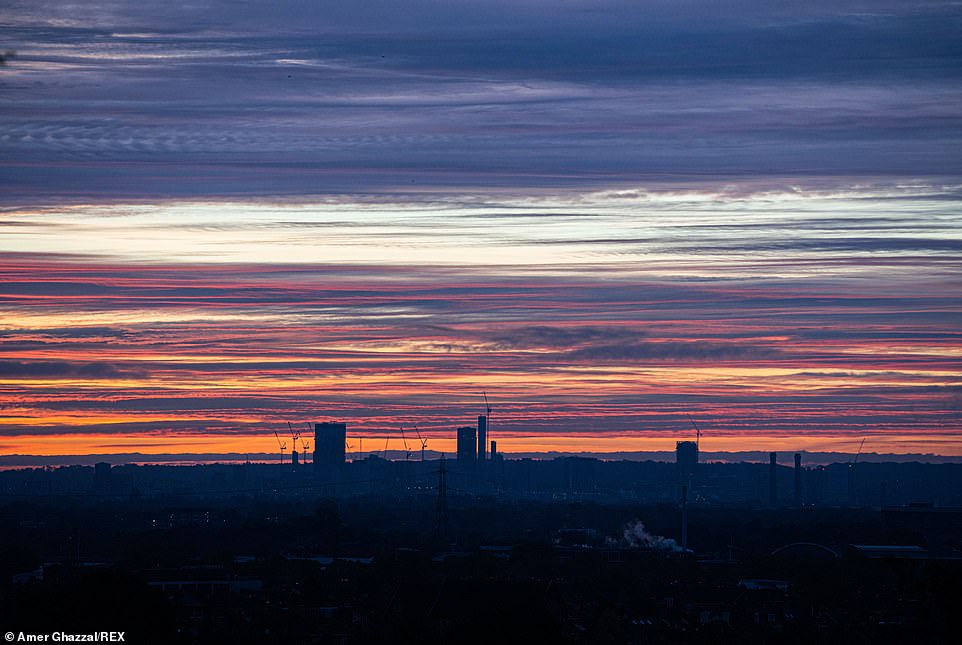 Strong winds tonight will cause power cuts and travel disruption for millions of people, forecaster have warned. Pictured: Wimbledon’s dramatic skyline in southwest London this morning 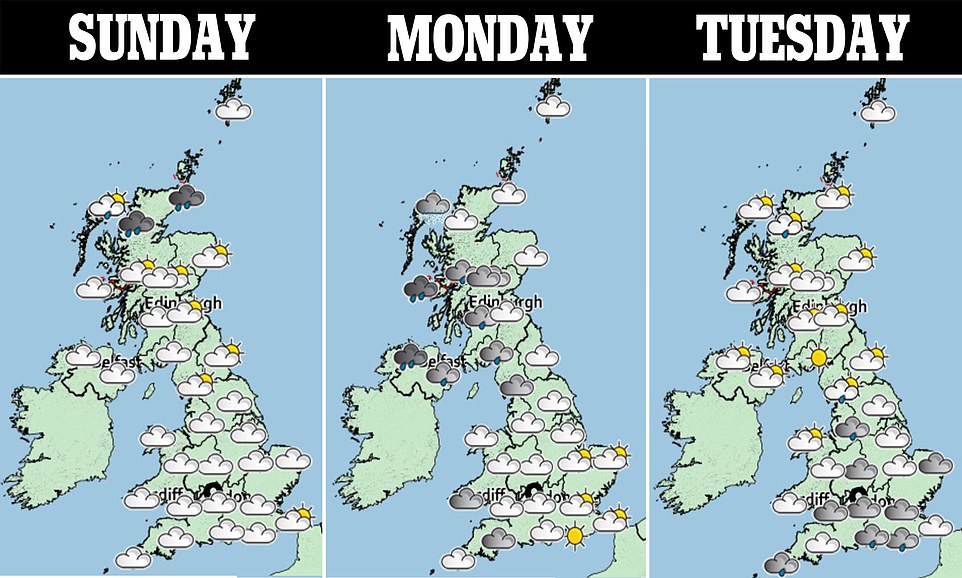 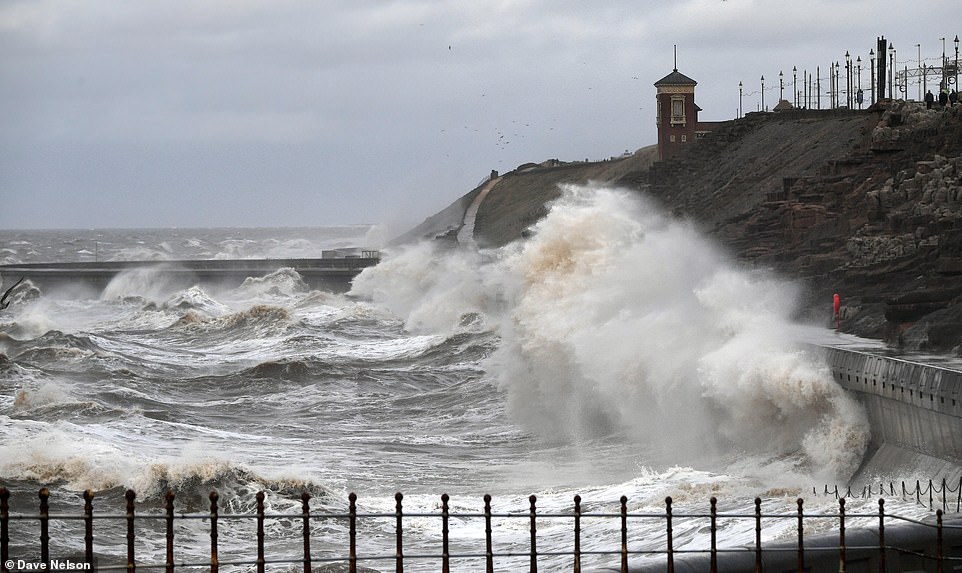 Gales from the Atlantic will reach 80mph and batter parts of the UK during firework displays this weekend, forecasters warned today. Pictured: Rough seas in Blackpool 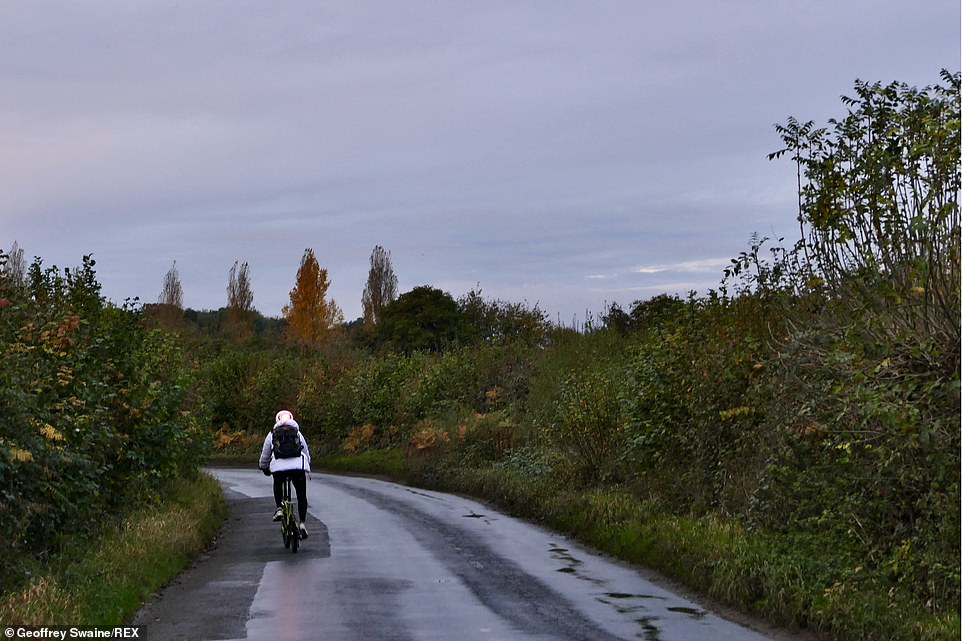 Weather in the South is expected to be breezy with some cloud for the rest of the day. Pictured: A cyclist makes his way down a country and at first light in Dunsden, Oxfordshire, today

Scattered showers will persist in northwest Scotland, Northern Ireland and parts of northwest England today, but cloud and rain will clear across the southern UK this afternoon.

Met Office meteorologist Aidan McGivern said: ‘So a wet start then as the cold front pushes into western Scotland and Northern Ireland on Saturday morning. 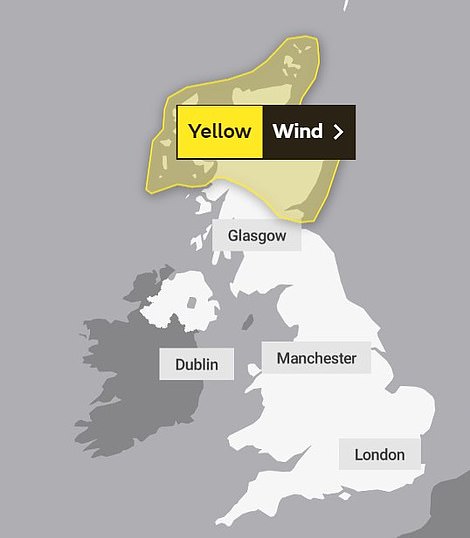 The Met Office has today issued yellow weather warnings for parts of Scotland including Central, Tayside and Fife, Grampian and the Highlands — which means that severe weather is expected and could cause delays to road, rail, air and ferry transport

‘To the South, breezier and a bit more cloud around but still some breaks in the cloud, plenty of fine weather through Saturday for the South and South East.

‘As that rain sinks south though, the winds really pick up later Saturday – gales or severe gales for the northern and western coast of Scotland in particular. But the wind of course coming from a milder direction – temperatures are going to be up at 11C to 13C.’

And below-average temperatures observed this week are likely to continue well into this month, with Met Office forecasters expecting that high pressure near Greenland will help to push colder air from the North towards the UK.

In the Met Office’s outlook for the first half of November, it says: ‘Blustery showers are possible in the far east and northeast at the start of the period, but these quickly clearing. Otherwise, plenty of fine, dry weather with long spells of sunshine.

‘Feeling colder initially, with frosts possible, especially in the north. Rain and thicker cloud will then steadily encroach from the west. Areas of low pressure lying to the north or northwest of the UK will then bring unsettled conditions, predominantly affecting the north and west, with some heavy rain and strong winds followed by cooler, more showery interludes.

‘The driest and brightest weather is likely to be in the southeast where rain bands will often be weak. Temperatures generally around average thorough this period, although brief cold spells possible.’

Looking ahead to the period from November 18 to December 2, the Met Office says: ‘Through this period, there is an increased chance of wintry showers from the north and northwest, initially over higher ground but also a low risk at lower levels later in the month. 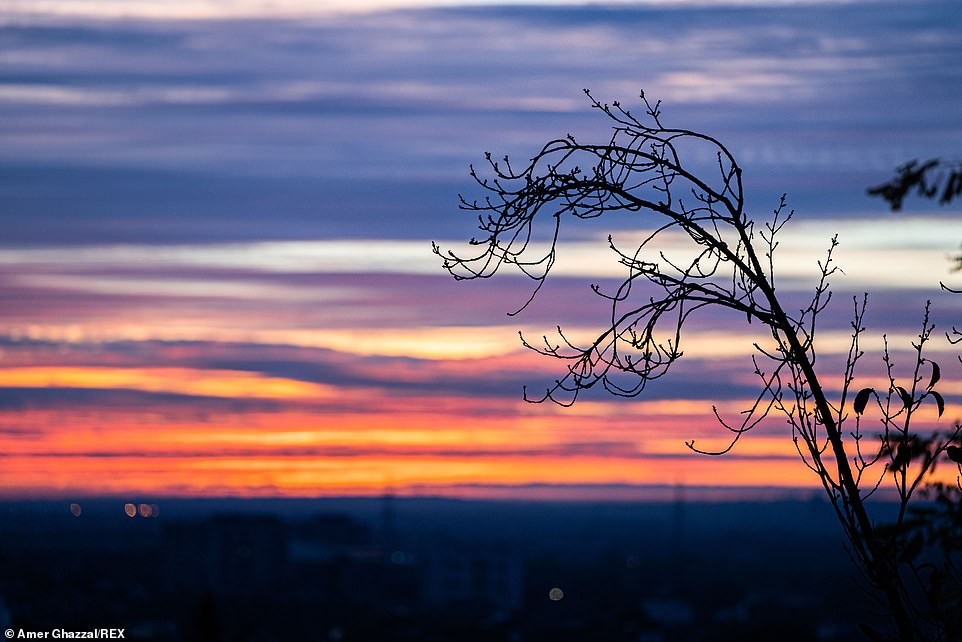 The past three days have brought sub-zero temperatures of -1.7C (28.9F) at Bridgefoot in Cumbria, -2.5C (27.5F) at Hurn in Hampshire, and -1.8C (28.8F) at Benson in Oxfordshire. Pictured: A colourful dramatic sky in Wimbledon, southwest London, at sunrise this morning

‘While there is little sign of prolonged, widespread settled weather, conditions are likely to be less stormy and windy. Where there are more settled spells, frost and fog are increasingly likely, with temperatures slightly colder than average. Overall remaining drier than average.’

BBC Weather’s forecast for this period said: ‘Moving into the second half of November, we should see an overall colder pattern begin to take shape.’

It added: ‘High pressure near Greenland will help direct colder air from the north towards the UK, leading to a period of below normal temperatures.

‘As the Greenland high becomes more entrenched and occasionally extend towards Northern Europe, winds are likely to diminish. With low pressure still expected to be close by, this doesn’t appear to be a dry pattern, but it is also unlikely to be an extremely wet pattern.’