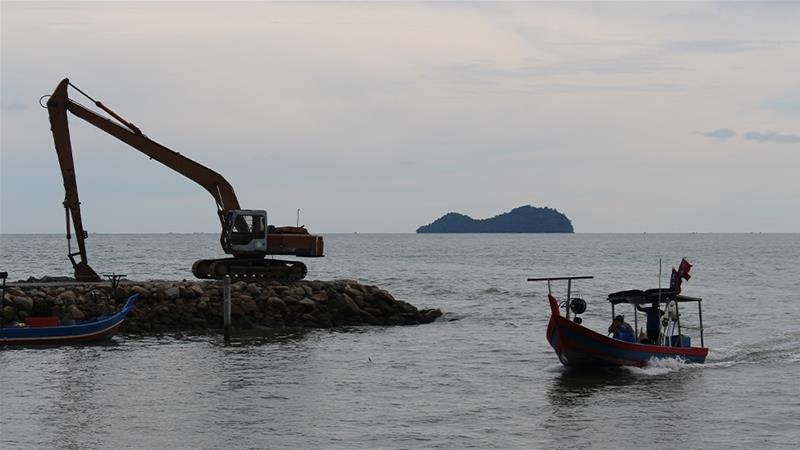 Sungai Batu, Penang, Malaysia – People from the villages hugging Penang’s southern coast have fished the seas off the Malaysian island for generations, scooping up prawns and digging out crabs to feed its food-loving residents.

The fishermen know the vagaries of tide and wind, and the dangers of the monsoon that sweeps in each June.

But now their existence is under threat.

The government of the state of Penang wants to create three artificial islands covering 1,821 hectares off the gently curving bays where the fishermen live and work to help pay for an ambitious $11bn transport plan to ease traffic congestion, improve public transit services and relieve what it says is development pressure on the hilly and forested island.

The state includes parts of the mainland, connected by two bridges as well as a ferry service, but most tourists are drawn to the family-friendly beach resorts on the island’s northern coast, the colonial-era capital of George Town and the rainforest-topped hills.

Assuming the three-island project gets the green light by the federal government, the construction of the islands and the subsequent development of an industrial park, housing estates and green public spaces would take between 30 and 50 years. 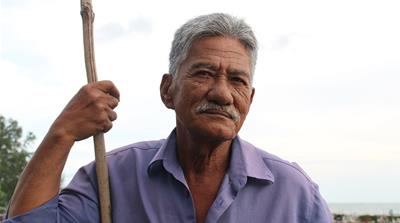 “This is the golden place in Penang,” explained Zakaria Ismail, a fisherman in Sungai Batu, one of the villages which will be affected by the plan, leaning against a railing on a jetty hung with fishing nets. “You can go out anytime – morning or afternoon – and you get prawns, shellfish, even oysters.”

In the bay, sheltered by a breakwater, bright blue wooden boats bob in the tide and some of the fishermen snooze on hammocks slung between the trees along the beach.

The men here do not go far out to sea and mostly use traditional flat-bottomed boats fitted with outboard engines. It is not a lifestyle that has made them wealthy, but it is what they have done for generations.

“We only have small boats,” said Talib Seman, a 40-year veteran of the industry. “If there’s reclamation, where are we going to go? There’s no way we can go out.”

Talib points out across the water. “[The reclamation] will go from one end to the other.”

Penang’s fishing community is at the forefront of a campaign to stop what critics fear will destroy fishing grounds, cause irreparable damage to the environment and undermine food security.

Their objections, backed by Malaysia’s Fisheries Department, led to the project’s rejection in 2017 after the filing of an initial Environmental Impact Assessment (EIA) – a requirement for any reclamation project of more than 50 hectares.

With the federal government considering the state’s application anew, the fishermen and at least 45 civil society groups from across Malaysia are appealing to Prime Minister Mahathir Mohamad to block the project. They plan to march on parliament in Kuala Lumpur in July.

Reclamation is an increasing feature of Malaysia’s western coast, but the creation of man-made islands has attracted controversy for the environmental and financial costs.

Objections from neighbouring Singapore – itself no stranger to reclamation – forced modifications to the 19 square-kilometres Forest City by Chinese developers in southern Malaysia in the narrow channel facing the city-state.

Meanwhile, traditional fishermen in Melaka have struggled to cope with the decline in fish stocks and the rise in siltation fuelled by another China-backed reclamation project under construction off the coast of the historic city.

In Tanjung Tokong, in Penang’s northwest, where an undersea road tunnel that is also part of the transport plan is due to be built, another reclamation project is nearing completion.

On a still early June evening, the water laps at the black mud along the rock-filled shoreline as dredgers, excavators and barges – the artillery of the reclamation industry – create land where once there was sea.

They are building an island of nearly 364 hectares, and much of the new land will be used for high-rise apartments and luxury homes where there is already an oversupply. The fishermen and their boats have all but disappeared.

“It’s basically a developer-driven vision that the government has,” said Mohideen Abdul Kadeer, acting president of the Consumers Association of Penang, referring to the state government. “They are very much influenced by the developers. That’s why some people joke it’s not a Penang Transport Master Plan, but a Penang Developers Master Plan.”

The state government is behind the three-island proposal but it has appointed SRS Consortium – a joint venture between Gamuda, one of Malaysia’s biggest construction companies – and two local developers to lead the development. 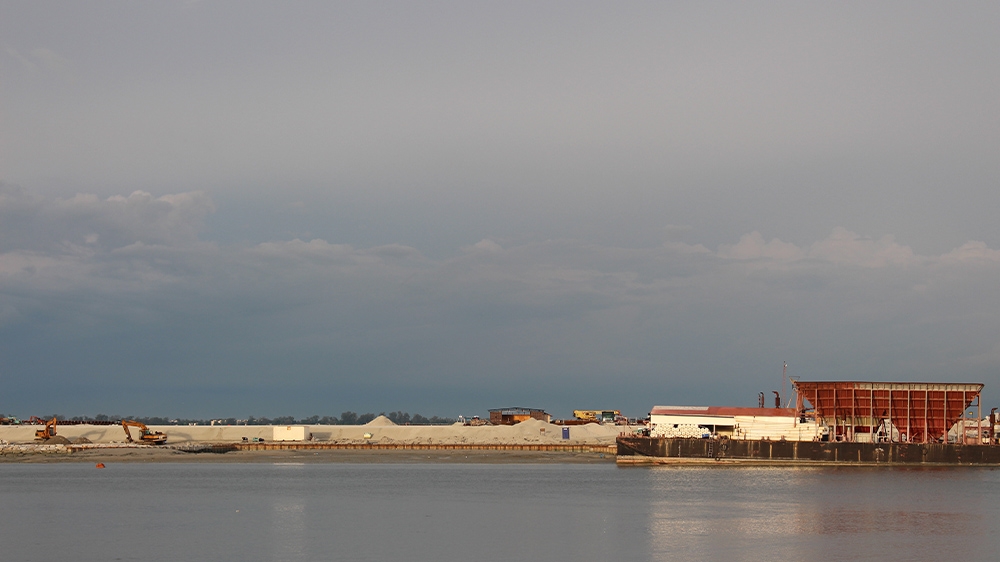 The transport plan is supposed to reduce congestion in George Town – a World Heritage-listed city that has emerged as a hugely popular tourist destination in the past few years – with a combination of the tunnel, three giant expressways snaking around and through the hills, and a light rail line.

Chief Minister Chow Kon Yeow denies the transport plan is too focused on cars and insists the three-island project is crucial to Penang’s growth over the next few decades, providing the means to ensure the state’s infrastructure can cope with a larger population as well as an expanded electronics and technology industry, a major sector in the island’s economy.

“If our forefathers had not done anything to create over 1,000 acres [404 hectares of land] from north to south, then Penang would not be what it is today; a small state punching above its weight as a Silicon Valley of the east [and] as a renowned tourist destination,” Chow told Al Jazeera. “We recognise that the landscape will be changed permanently with the reclamation, but it is a price we consider seriously knowing that it serves the future of the state.”

He told Al Jazeera “significant improvements” had been made since the first EIA for the project was rejected two years ago, but declined to go into details.

The chief minister met representatives of the fishing community at the end of May and said a “breakthrough” had been reached, noting the delegation had been willing to discuss issues such as compensation and the acquisition of larger, more modern boats that would allow them to travel further out to sea.

But Nazri Ahmad, chairman of the Fishermen’s Association of Penang Island, who led the group, says their number one priority remains to stop the project.

“For the fishermen, the sea is their life,” Nazri told Al Jazeera. He estimates about 1,800 fishermen are at risk from the southern reclamation plans.

“These are areas the government should protect,” he said. “We believe it’s our khazanah negara (national treasure).”

The livelihoods of fishermen in the neighbouring states of Perak and Kedah, who also fish in the seas off Penang, are at stake, too, along with extensive aquaculture industry. The two states will also be affected by plans to source the 189.1 million cubic-metres of sand and rocks to build the islands. 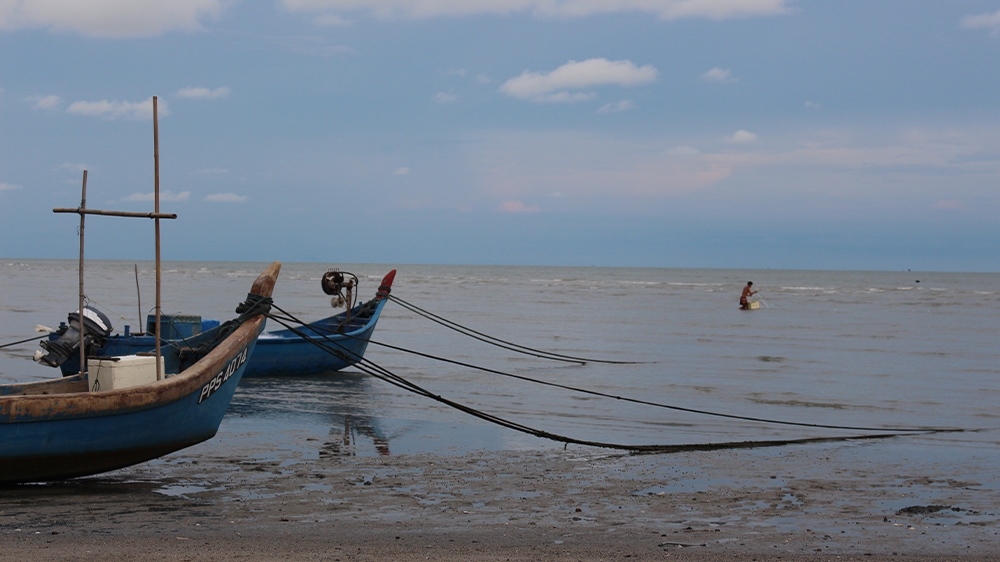 Yee Lai Wan retired to the sleepy village of Gertak Sanggul in southern Penang more than 10 years ago. Little more than a single street, squeezed in between the sea and the hills, the village is dotted with Chinese shrines where visitors venture out onto the mudflats with their buckets at low tide to search for cockles and crabs. The village’s jetty has long since disintegrated.

The bay is the proposed site of the last of the three man-made islands. Yee, an environmental expert who once worked in Hong Kong, is vehemently opposed to the project.

Creating the islands for an industrial park and what has been tagged a “smart” and “green” city is expected to drive carbon emissions – an extra 3.2 million tonnes a year, according to the National Physical Planning Council – increasing climate pressures at a time when Penang is already suffering more often from floods and landslides.

“They don’t seem to understand that the world is moving away from these kinds of projects where you destroy an area in order to build something else,” she said of the project’s backers. “If it’s making the fishermen worse off, then it’s not sustainable and it shouldn’t be happening.”

In Sungai Batu’s modest fish market, the day’s catch is heaped in plastic baskets on white tiles. Local residents pick out their favourite fish, as the neighbourhood’s stray cats stalk the aisles. 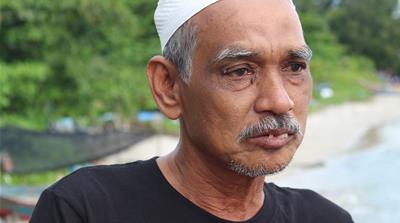 On the breakwater, an excavator is on standby for the near endless process of scooping up the mud that builds up around the river mouth – made worse during the monsoon when the seabed is stirred up by the stronger winds and currents, according to the fishermen.

The village fears the reclamation will add to the problem and clog up the 250-metre channels that are supposed to separate the new islands.

Zakaria, on behalf of some 200 fishermen in his community, wrote again to the Department of Environment this month detailing his concerns about the project.

At the end of his letter, Zakaria turned to a verse from the Quran – a warning that many of the people who end up causing disaster are the very people who think they are doing good. He was afraid the department was among them, he said.

“Life on earth is only a brief moment, but heaven is for eternity,” he wrote in Malay. “Pray for those who are wrong for God will be the one who will judge.”