Fishermen film themselves hacking off a shark’s tail in Greenland

Fishermen film themselves hacking off a shark’s tail then throwing it back into the sea shouting: ‘Good luck trying to swim, you punk’

Two fishermen who filmed themselves laughing as they cut off an endangered shark’s tail have received a huge backlash.

Horrific footage taken by the men on board their boat shows them throwing the shark back into the sea.

The shark is shown struggling to swim away as it leaves a stream of blood from its painful .

The men even show their grinning faces in the video, and are heard shouting ‘good luck trying to swim, you punk!’ at the animal.

The video was taken in Greenland, a Danish territory, and happened after the shark’s tail got caught in a fishing line.

Both men have since been fired from their fishing jobs and could even face criminal charges, according to local news outlet RUV.

Greenland sharks do not prey on humans and are listed as an endangered species.

The men threw the tortured shark back in the sea after cutting off its tail. The unlucky animal had got itself caught in a fishing line

One of the men posted the depraved video online, but took it down when it quickly provoked outrage.

Christel Yr Johanse shared the distressing video on Facebook, writing: ‘The guy is so proud of himself that he disabled comments because no one seems to agree with him .. got a screengrab before he closed that … share at will.’

The owner of ship used by the men said in a statement: ‘This act is completely unjustifiable and those who committed it have no excuse.

‘The owners have no other choice but to refuse any more services from the person displaying this kind of behaviour.’ 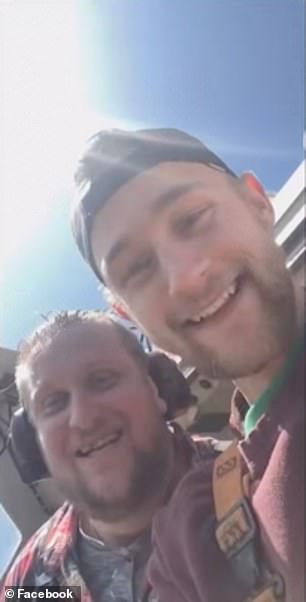 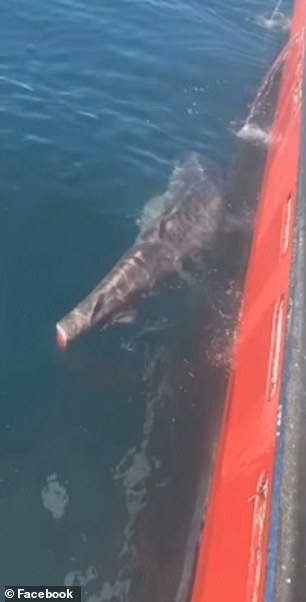 The men even show their grinning faces in the video, and are heard shouting ‘good luck trying to swim, you punk!’ at the animal when it tries to swim away