London: Six international flights that were supposed to be carrying Australians home will arrive at Sydney Airport completely empty of passengers today with new, halved flight caps coming into effect.

Three more planes, carrying eight, ten and 12 passengers each will land – and between them they are capable of carrying at least 750 passengers.

From today, the number of Australians allowed home will be slashed from 6070 to 3035 following a push by the Labor Premiers at the national cabinet which will see 18,000 Australians bumped from flights over the next six weeks. 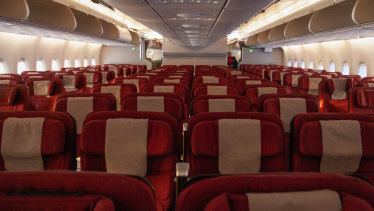 Around 34,000 Australians have told DFAT that they wish to come home but can’t because of the restrictions on the number who can enter per week.

Bianca Marotta has twice had her visa, which expired in February, extended by the UK government but is worried it will not be renewed a third time before she can get home.

On Friday night she was notified that her flight next week had been cancelled as a result of caps.

“It doesn’t really make sense to me,” the 31-year-old said and urged the government to devise proper quarantine arrangements.

“I understand Australia wants zero cases but those stranded will never get home at this rate.

“Many Australians onshore don’t seem to understand that if I don’t have a visa here I can’t work which makes things worse financially and for the Australian government to say to us to ‘ask family and friends for money’ is disgraceful.” 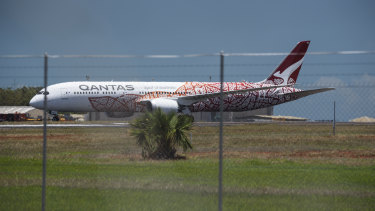 Around 34,000 Australians have registered with DFAT as stranded overseas.Credit:Getty Images

Marotta says she is now financially dependent upon her boyfriend until she can get a flight home, something for which she says she is grateful.

But she says she should not be forced into this situation as a result of Australia’s policies.

Britain’s Home Office has been extending visas for Australians or citizens “where a nation has closed their borders or where quarantine facilities are temporarily oversubscribed” following a request by the Australian government last year.

Australians in Britain are being quoted fares of $10,000 for flights home in September.

The federal government has said it will increase the number of Qantas repatriation flights that fly into Howard Springs to 29 as a way of offsetting some of the bumpings and cancellations homeward-bound Australians are already experiencing.

A Qantas repatriation flight due to depart London for Howard Springs later this month sold out in just three minutes when tickets went on sale last week. 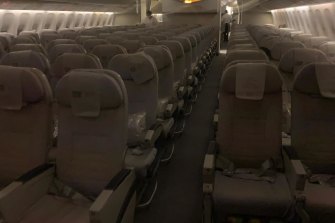 An Emirates flight to Perth, Australia in May 2021 showing empty seats as a result of flight caps.

A spokeswoman for American Airlines said they would be flying 20 flights empty from Los Angeles into Sydney over the next two months.

“On certain days in July and August, the Australian government has advised that we’re not able to transport customers on the route due to the ongoing coronavirus (COVID-19) pandemic,” the spokeswoman said.

“We’ll reach out to customers scheduled to travel on the affected flights to offer alternate arrangements.”

There are currently no direct flights between LAX and Sydney available until August 30 after next week and American Airlines is not accepting new bookings for AA-operated flights until January. 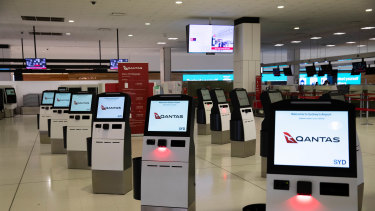 Barry Abrams from the Board of Airline Representatives of Australia (BARA) said the government’s Qantas-operated repatriation flights would do nothing to clear the growing backlog of Australians trying to get home.

“They would probably bring in about 1700 passengers and we’ve bumped the better part of 20,000 so that is a very small increase that they can realistically do given the large numbers that we are bumping,” he said.

The cuts to the flight caps mean that on Wednesday, a total 237 people are expected to arrive in New South Wales compared to 447 last Wednesday according to data supplied by BARA.

The number of freight-only flights, or completely passenger-less flights today has increased to 16 compared to 11 last week meaning they now outnumber those carrying Australians.

Abrams said if the caps continue at their reduced rate beyond August 31, airlines would start pulling flights or abandon Australia altogether.

“The expected outcome of halving the arrival caps and zeroing out a number of flights is, as you would expect, going to be a sustained reduction of passenger flights coming in and an increase of cargo-only flights,” he said.

Abrams said many airlines hadn’t pulled out of Australia yet because the flights were scheduled months in advance including rostering and paying of flight crew.

But he said this could change after August 31, when the national cabinet decides if it will continue with the reduced caps for the next few months and possibly the remainder of the year.

“That will be a trigger for them to start reevaluating these flights quite closely,” he said.

“Then it might well become more commercially rational for airlines to even cease a number of the cargo-only flights because there might well be opportunities to use them properly as passenger aircraft for countries that are gradually reopening, such as in Europe.”

Abrams called on governments to show what evidence it has that cutting the number of people allowed into Australia will substantially reduce the risk of a COVID outbreak.

“We’re yet to see any research or evidence on how cutting the caps substantially reduces the risk of COVID,” he said.

New South Wales will continue to bear the heaviest load of quarantining returning Australians, accepting 1505 per week with Queensland in second place, accepting 650 arrivals, followed by Victoria’s 500 and 265 each in WA and South Australia.