Flying cargo: Getting athletes to pandemic Games a logistics nightmare

Singapore: Ensuring 11,000 athletes from more than 200 countries descend on one chosen city over the course of 16 days is a logistical challenge at the best of times. Now consider doing it at the tail end of a global pandemic that’s upended airlines’ flight schedules, closed international borders and made any movement without jabs and multiple COVID tests impossible.

For hundreds of Olympic organising officials eyeing the start of the Tokyo Games in just 18 days it’s a major headache. Forget about medal tallies and post-race parties (to the limited extent they’re permitted at all), just getting to Japan on time is half the battle. 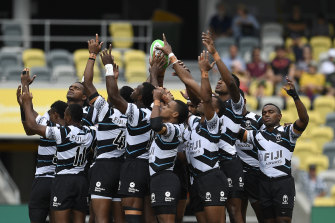 The Fijian team stands in a huddle before the start of the Oceania Sevens Challenge match between Fiji and Oceania in Townsville on June 27. The team and others from Fiji will have to make alternative arrangements to get to the Tokyo Olympics.Credit:Getty Images

Teams from Fiji, best known for its pristine beaches and tropical seas, isn’t flying economy so much as cargo – the Rugby Sevens men’s and women’s teams, plus a handful of other athletes including some swimmers and sailors, are flying from Nadi to Narita on a service that generally transports chilled seafood like tuna and mahi mahi, and express mail.

“Travel is definitely a major challenge,” said Lorraine Mar, head of the Fiji Association of Sports and National Olympic Committee. “Fiji Airways isn’t doing any commercial flights at the current time so we’re going up on a cargo run.”

Mar said Fiji was trying to coordinate with other South Pacific nations to “do a milk run around the other islands to collect everyone, but it wasn’t commercially viable.”

Papua New Guinea’s team plans to fly to Brisbane and then onto Tokyo while Samoa’s squad will likely go first to Auckland and then fly Air New Zealand, she said.

Other teams are finding they have to travel thousands of miles in the wrong direction before making their way to Japan.

Under normal circumstances, the Sri Lankan team would have taken a flight to Singapore and from there onto Tokyo. But with COVID cases still averaging almost 2000 a day, the island to the south of India, is on many countries’ banned lists. 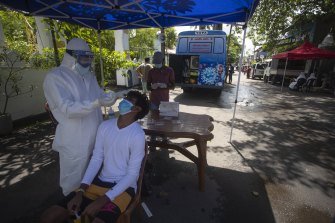 As a result, the 10-strong team across disciplines including badminton, judo and archery, is booked on Qatar Airways via Doha, according to National Olympic Committee of Sri Lanka President Suresh Subramaniam. They’ve got a back-up flight on SriLankan Airlines in case the situation changes.

“I hope and pray nobody falls ill once we go to Japan,” Subramaniam said. “We’ve got an extra doctor flying with us this time to look after any COVID issues. We’re taking every precaution.”

Although most athletes have been fully vaccinated and Games organisers require negative COVID tests prior to arrival, there have already been some upsets. A member of Uganda’s Olympic squad tested positive in Japan last month, despite having been inoculated earlier.

Even the fastest woman alive can’t avoid all the logistical hurdles along the road to this year’s extraordinary Olympics, which will be held with no international spectators and strict social-distancing measures that include rules around how many hours after their race athletes must leave the Village. 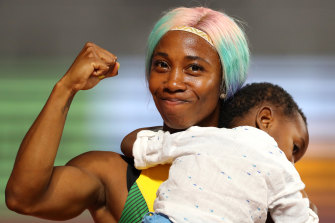 Shelly-Ann Fraser-Pryce of Jamaica celebrates with her son Zyon after winning the Women’s 100 Metres final at the World Athletics Championships Doha in 2019.Credit:Gety Images

Jamaican sprinter Shelly-Ann Fraser-Pryce, the odds-on favourite for the women’s 100 metres, faces a labyrinth of connecting flights, layovers and paperwork just to get to Tokyo. “I have a Jamaican passport so it’s even more difficult for me to travel,” the two-time Olympic champion said.

For the 34-old-sprinter, the trip is a nearly 13,000-kilometre journey in the opposite direction to the shortest flights. Fraser-Pryce anticipates she will travel from her home in Kingston to Miami, then on to London to catch a connecting flight bound for Tokyo. Because the pandemic has elevated fares, the cheapest flight from Kingston to Tokyo on economy runs to nearly $US5000 ($6600) on Expedia.com

The Brazilian delegation, meanwhile – a large group of almost 300 athletes competing in events from fencing to skateboarding, shooting, swimming and gymnastics – had to scramble to get flights on Lufthansa after its original carrier Air Canada cancelled flights that would have taken the team via Toronto. 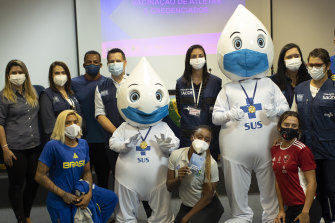 Brazilian athletes, health workers and military officers pose for a photo with COVID-19 vaccination mascot, Joseph Droplet, after the athletes received Pfizershots in Rio ahead of the Tokyo Olympic Games.Credit:AP

“Due to the pandemic, we had to make some necessary changes that demanded creativity,” Brazilian Olympic Committee President Paulo Wanderley Teixeira said, adding that even getting the sporting equipment to Tokyo has been a “true war operation.”

“We also had a few surprises regarding airline tickets. For example, we had a contract with an airline and had already paid 80 per cent, but they changed their route and cancelled,” Teixeria said. Flying Lufthansa via Frankfurt, Germany, is more costly but at least the team is able to pick up some of its athletes who happen to be training in Europe en-route, he said.

Another particular logistics problem of holding the Games during a pandemic has been that many athletes haven’t been able to train in locations they would have normally otherwise. Difficulty travelling internationally has also made getting to the necessary qualifying events extremely tricky.

Jamaica’s track team would typically have trained and competed in Europe for a few weeks before the Games. An earlier plan to train in Tottori, about 650km west of Tokyo, was also scrapped, according to Fraser-Pryce. That means she’ll get less time to work out the passing of the baton to other teammates in the relay.

Argentinian sailor Santiago Lange, who won gold at Rio in 2016, is one of the luckier ones, having escaped South America to Sicily in Italy, where the wind and weather conditions are similar to Japan. He and his crew mate Cecilia Carranza Saroli are now in Barcelona, waiting for their flight to Tokyo later this week.

“We normally have at least 90 days to get to know the conditions, and now we’ll have only eight. Those eight days for our particular sport are not enough,” said Lange, who wasn’t able to sail in Argentina for several months due to COVID restrictions last year.

In the pair’s rented house in Sicily, they put up pictures of Mount Fuji to stay mentally connected. “In normal circumstances, we’d compete in at least 10 competitions a year. We did only two last year,” he said.

And of course, as athletes in far-flung places that aren’t international hubs check their luggage and boarding passes one last time, the virus that has laid waste to so many lives, hopes and dreams is never far from their thoughts.

“We usually think of the race,” said Selemon Barega, an Ethiopian long-distance runner who competes primarily in the 5000 metres. “But now the fear of the virus is also running in our minds.”