Former Kardashian bodyguard reveals how he fought off armed robbers

A hero praised as a real-life Rambo after taking on a gang of armed robbers and fighting them off has revealed how he fought off armed robbers as they sprayed his armoured security trick with bullets in South Africa.

Security expert Leo Prinsloo, 52, who has personally protected Prince Charles, the Kardashians and Nelson Mandela, spoke as he showed off the bullet-ridden truck from the the incredible footage of the attempted heist that went viral last month.

Leo and his sidekick Lloyd Mtombemi remained calm despite their armoured escort vehicle being peppered with over 30 bullets from two cars firing AK47’s at them.

They were protecting an armoured vehicle with a cargo of mobile phones worth hundreds of thousands of pounds on April 22.

Now, Prinsloo – who has since faced death threats from the gang – has given a tour of the vehicle that protected him and his sidekick from the hail of bullets and attempts to ram them off the road, allowing Prinsloo to escape.

‘If it wasn’t for this beast, we wouldn’t have had this conversation now, would we?’ Mr Prinsloo casually said to the presenter from Armor Max – the company that makes the armoured vehicles.

‘Thanks for giving me the opportunity to be alive still today. She performed really awesome. Like I said, I was lucky, other guys are not so lucky.’ 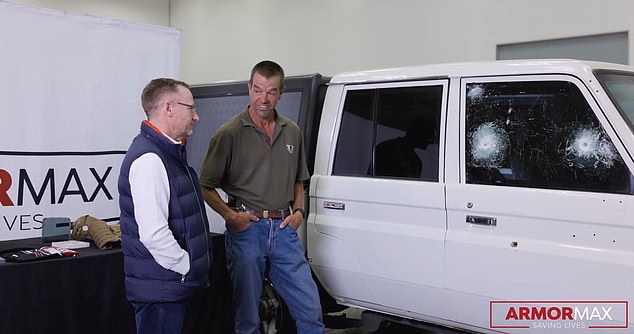 The presenter points to bullet holes down the right-hand side of the vehicle where the assailants first tried to attack from, with the window also shattered showing the ‘spider web’ pattern in the bullet-proof glass caused by the rounds.

‘They were out to kill you,’ the presenter says, noting the gang at no point tried to stop the vehicle and take it without any gunfire.

‘The first time I really knew they were there was when the cracks came out,’ Prinsloo tells the presenter. ‘I knew immediately, it’s not a cracker going off,’ he joked.

‘As I looked [over] my shoulder, I saw them, and I saw the puffs of smoke, and then the shots came in,’ he recalled. ‘Only after the fourth crack, it started hitting and cracking the windows.’

Former police sniper Prinsloo was escorting the high value cargo in his unmarked armoured Toyota Land Cruiser when he was ambushed by two cars full of gunmen.

In the footage of the attack, a dozen shots at least are heard as one car pulls alongside security expert Leo on the N4 motorway in capital Pretoria, opening fire and finally shattering his bullet proof window. 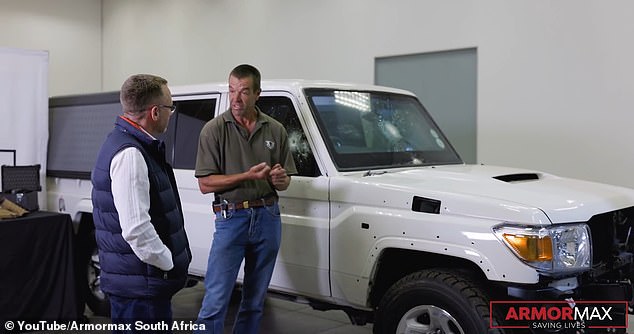 Security expert Leo Prinsloo, 52, who has personally protected Prince Charles, the Kardashians and Nelson Mandela, shows off the bullet-ridden truck that featured in the incredible footage of the attempted heist that went viral last month . 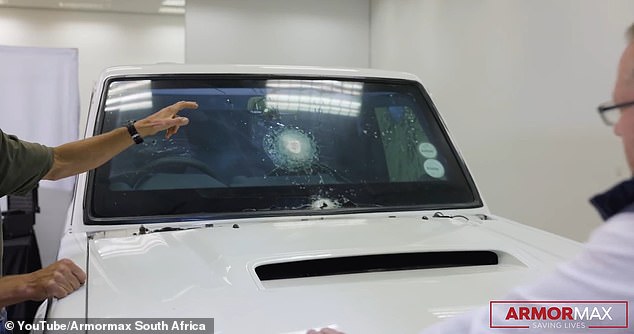 Pictured: Prinsloo gives a tour of the vehicle that protected him and his sidekick from the hail of bullets and attempts to ram them off the road, allowing Prinsloo to escape

Incredibly Leo – who was with the South African Police Services special forces unit for 12 years and teaches their military special forces to shoot – remains remarkably calm under attack.

After losing visibility out of the right-hand window, he says he had to keep swivelling his head to make sure he never lost sight of the attackers, who changed side on the road and attempted to attack from the left side of the truck.

At that point, Prinsloo says he attempted to knock one of the attacker’s vehicles back wheels to spin their car off the road, but the driver was able to keep control, before the second car – an Audi – also raced past him.

‘As he came past me, I was a little bit late. I just touched his backside so he went off the road, but managed to keep it up,’ he said.

‘Now there’s three armed pedestrians on the highway with AKs,’ Prinsloo says, so he turned the vehicle around, but the Audi had followed him and gone ahead of him, with the robbers forming a row of gunman on the highway ahead of him again.

Prinsloo recalls that he drove at the gunman, and as they were shooting at the windscreen, he got the truck stuck. At that point in the viral video, Prinsloo is shown bravely getting out of the car with a rifle, which is where the video ends.

In total, there were 13 bullet impacts on the car, with none of the bullets penetrating the armoured vehicle. ‘This thing is the reason why I’m still here,’ he added. 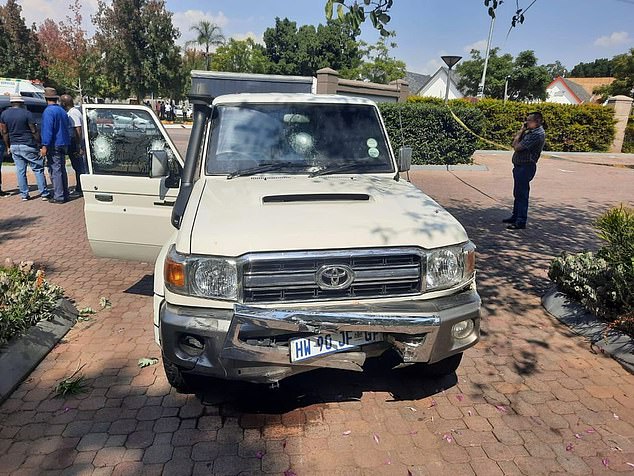 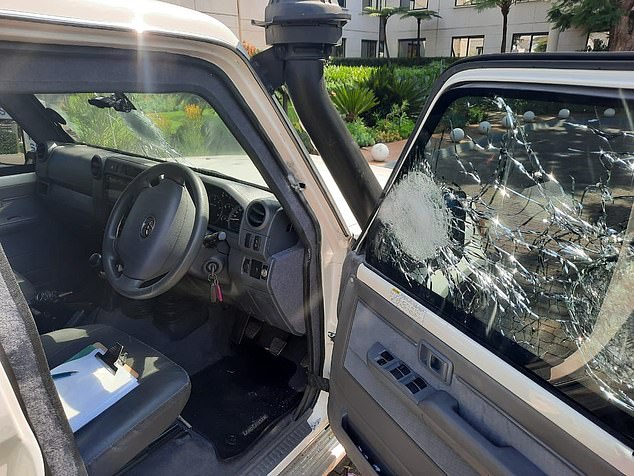 A dozen shots aa least are first heard as one car pulls alongside security expert Leo on the N4 motorway in capital Pretoria. The targeted vehicle is pictured, above and below

After the amazing footage went around the world, Leo and his family from Pretoria, South Africa, were paying the price – having been threatened with execution and put into protective custody.

A security expert close friend said: ‘The gang have put the word that out they were not happy that Leo fought off and has said that he and his family have to pay for it.

‘It would give the gang who did it huge street cred.

‘His family are in a safe house while we work out who they are and take the threat to them first and eliminate it and they then know that we are extremely serious.

‘We don’t mess about when gangsters threaten one of our own’ he said.

Leo had previously said: ‘I was only doing my job. I am a security instructor and have my own company that trains police, military, security companies and people how to react.

‘The key is to pre-visualise what it going to happen and stay in that mindset so when the bullets start flying you know what to expect and are prepared for it. 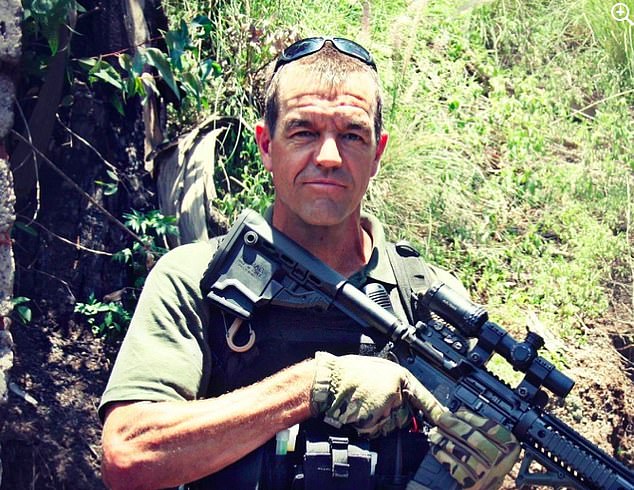 Mr Prinsloo, pictured above, has a shooting academy called The Edge and trains police, military and security companies in shooting and unarmed combat and how to react to being under attack

‘Then you just go into automatic and deal with the threat. Lloyd had only been in the job less than a week so it was baptism of fire but he did what I needed.

‘I could have opened fire when I exited vehicle but safer not to do so as the threat was then exiting so our job was done and the vehicle we were escorting was safe’.

Mr Prinsloo runs a shooting academy called The Edge and trains police, military and security companies in shooting and unarmed combat and how to react to being under attack. He is said to be the best in the business.

His friend said at the time: ‘This video just shows Leo not only teaches but practices what he preaches. He is a real-life Rambo and has never showed any fear in his life. He is a trained sniper and never misses.’ 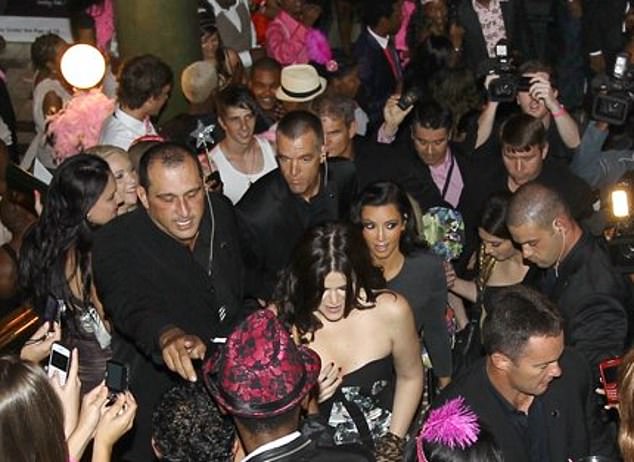 Firearms expert Prinsloo said: ‘I cannot say much as an investigation is underway but I and my fellow guard did what was expected of us. They needed to take us out so they could take out the cargo vehicle.

‘But there was no way I was going to let that happen and unfortunately I did not have a chance to return fire.’

Police spokesman Brigadier Vish Naidoo said: ‘The suspects in two cars fired many shots at a security vehicle in a convoy in an attempt to stop it during a high-speed chase in Pretoria.

‘The driver of the vehicle managed to evade the robbers but later stopped and got out to wait for the robbers but they fled instead. No arrests have been made as of yet.’