France’s covid testing teams down tools – for summer holidays: Laboratory staff head off on vacation just as signs of a second wave strike leaving country struggling with demands for tests

France is facing new coronavirus testing troubles as dozens of labs close to allow staff a summer holiday despite signs that a second wave is building.

Doctors have warned that the vacation crunch is just part of a larger web of failures in France’s testing strategy which was described earlier this week by the government’s own virus advisory panel as disorganized and ‘insufficient’.

‘First, there is a lack of workers to do the testing. If we don’t ask all the health workers to be available by mobilizing all of them, there are just not enough people,’ emergency services doctor Christophe Prudhomme at a hospital in Bobigny, Paris.

‘And then it’s a matter of organization,’ he said, urging regional health agencies ‘to organize testing so that it’s not the citizen who has to take his phone and try to call seven or eight labs in order to get an appointment that will take place only next week.’

It is worrying news for the country which saw its hospitals nearly drown with Covid-19 patients in the first wave – in part due to inadequate testing.

The country has already lost more than 30,300 lives to the pandemic and yesterday alone recorded 1,695 new infections.

A second wave also appears to be sweeping across the rest of Europe as countries such as Germany, Spain and Greece all see spikes in their infection rates with the global death toll yesterday topping 700,000. 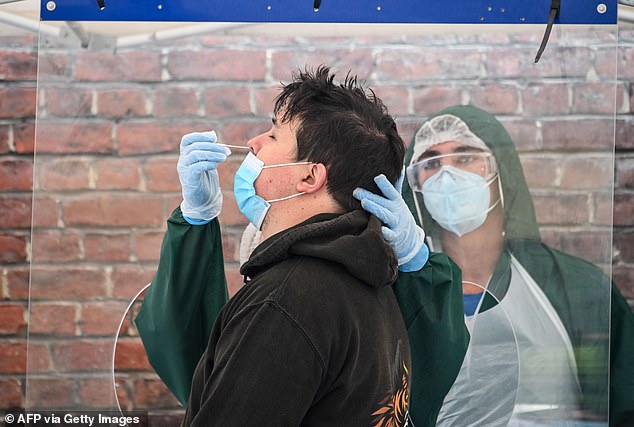 France is facing new coronavirus testing troubles as dozens of labs close to allow staff a summer holiday despite signs that a second wave is building (biologist pictured earlier this week taking a swab sample from a man in Lille, northern France)

In France, doctor’s offices and labs have joined dozens of other businesses in closing for staff to enjoy a summer vacation.

Those labs that have remained open have seen lengthy socially-distanced queues building up outside as people struggle to book a test appointment.

It is worrying news for the country which saw renowned hospitals nearly drown with Covid-19 patients in the first wave – in part due to inadequate testing – and has already lost more than 30,300 lives to the pandemic.

Two months of strict lockdown seemed to put the country on track in its fight against the pandemic.

But it is now once again recording around 1,219 new cases a day when, just two weeks ago, the seven-day rolling average was 719. 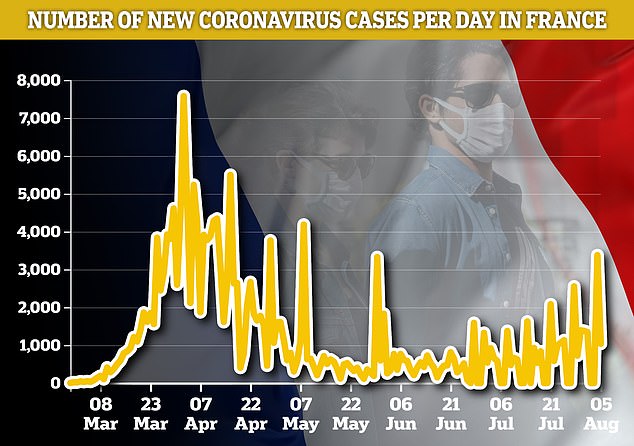 Two months of strict lockdown seemed to put the country on track in its fight against the pandemic – but it is now once again recording around 1,219 new cases a day (graphic showing growing number of daily coronavirus cases in France) 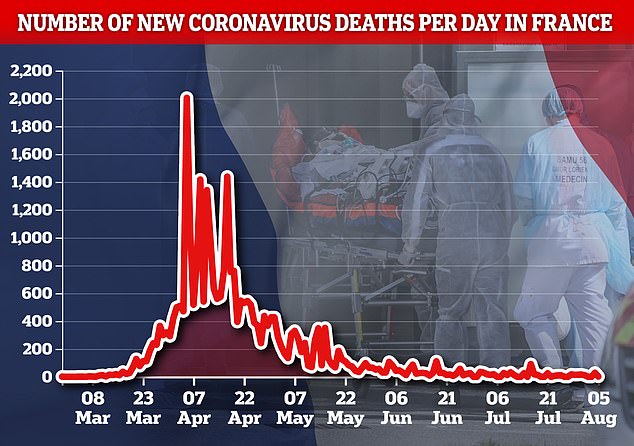 The country has already lost a total of more than 30,300 lives to the pandemic (graphic showing growing number of daily coronavirus deaths in France)

The number of patients in intensive care is also edging up for the first time in months.

The scientific committee recently said that the situation was ‘under control, but precarious. We could at any moment tip into a scenario that is less under control.’

It added: ‘The short term future of the pandemic mainly lies in the hands of the population. It is highly likely that we will experience a second epidemic wave this autumn or winter.’

The statement said the virus ‘has recently been circulating more actively, with an increased loss of distancing and barrier measures’ since France emerged from its strict two-month lockdown in May.

‘The balance is fragile and we can change course at any time to a less controlled scenario like in Spain for example,’ it said.

France is in better shape than last time to keep ahead of new infections but experts have warned that testing is key.

‘The virus didn’t disappear at all… The contamination is continuing, and amplifying in some regions,’ said Francois Blanchecotte, president of the Union of Medical Biologists, who has been in the forefront of French testing efforts.

‘We have to adapt the testing strategy to this evolution.’ 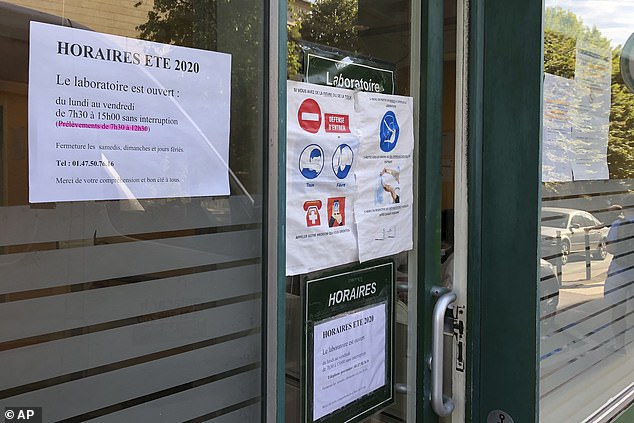 In France, doctor’s offices and labs have joined dozens of other businesses in closing for staff to enjoy a summer vacation (poster pictured shows special summer opening hours at a medical laboratory in Ville D’array, France) 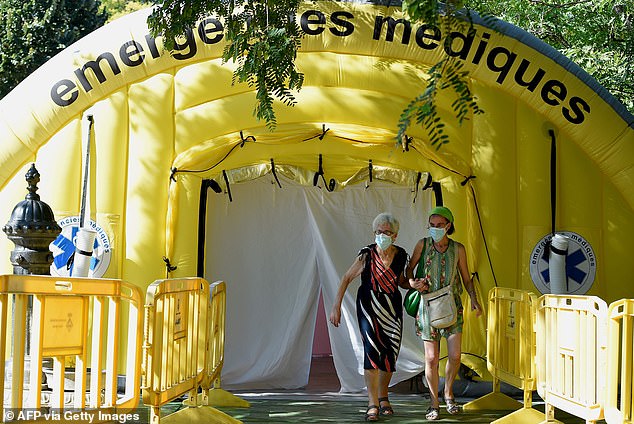 The government did not order anyone to skip vacation, which French workers see as a hard-won, fundamental right. Pictured: Two women wearing face masks leave a temporary testing centre for coronavirus in Ripollet earlier today

He is now pushing for a more targeted policy that takes into account lab capacities, such as organizing tests at beach resorts or tourist sites where young people are congregating.

Blanchecotte said he was particularly annoyed at a blanket government campaign to test 1.5 million Parisians to better understand how the virus is spreading.

The free test vouchers were distributed just as dozens of labs shut down for vacation which has worsened bottlenecks.

‘We are at a crossroads. We’ve seen a situation of disorder in Paris, in which labs were not ready to face thousands of people at the same time. It’s a nightmare to get an appointment,’ Blanchecotte said.

The government did not order anyone to skip vacation, which French workers see as a hard-won, fundamental right.

That was too late to stop an outbreak in the town of Quiberon in the western region of Brittany which was seemingly spurred by a night club party last month.

Authorities urged everyone in the area to get tested — a mammoth task on a peninsula where the population swells from 5,000 to 60,000 in the summer.

Some partygoers were foiled by long lines at a makeshift testing station and gave up, allowing the virus to continue spreading. 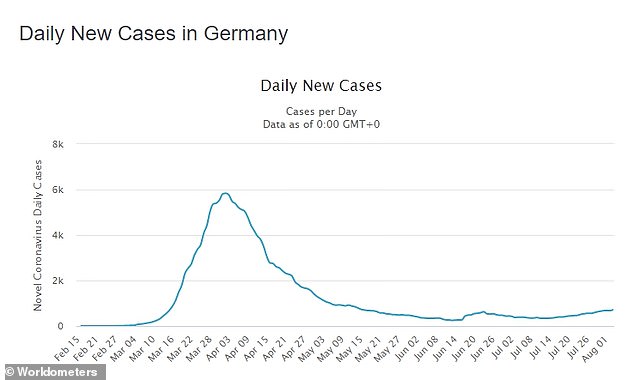 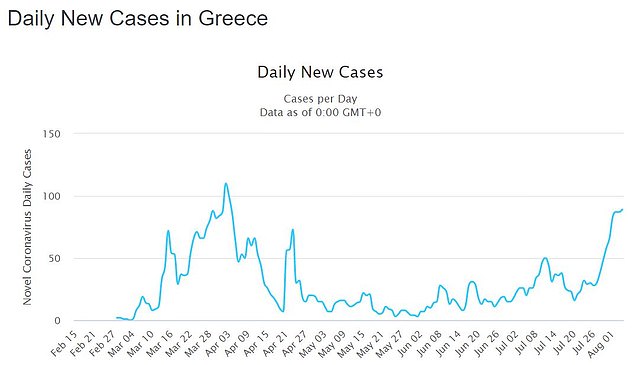 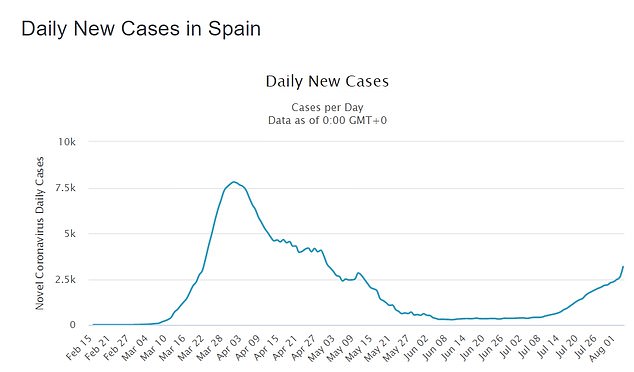 France is not the only country which appears to be suffering a second wave as Covid-19 cases rise across Europe including in Germany, Greece and Spain

In Paris, City Hall is trying to relieve the summer strain on labs with a mobile testing site at a beach venue on the La Villette canal, where crowds lined up Wednesday even before it opened.

Some labs have adjusted their hours to stay open late into the evening, or open on Sundays – both unusual for France.

After coming under fire for its limited testing capacity in the first wave, the government now says it can test up to 700,000 people a week, and last week hit a record high of 457,000 tests.

But the number of new positive cases is growing twice as fast as the growth in test rates, according to data from the national health agency.

‘For months, they worked overtime to keep up with virus testing needs’, he said with many staggering holiday departures or scaling back their vacation plans.

But he warned that autumn may be even worse: ‘We know that September, October, November are difficult months. We need to be prepared.’

France is not the only country which appears to be suffering a second wave as Covid-19 cases rise across Europe with the global death toll yesterday topping 700,000. 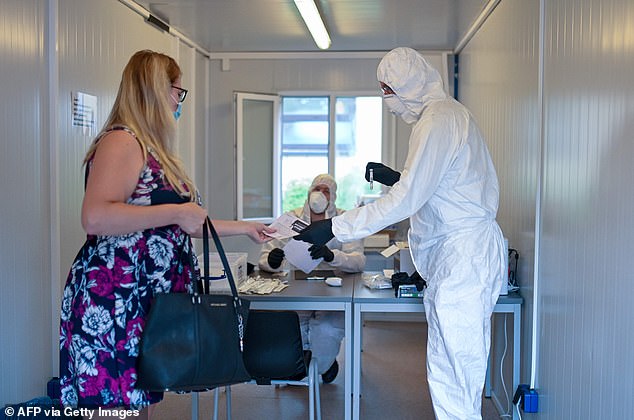 The head of Germany’s doctors’ union declared it too was in the midst of ‘a second, shallow upswing’. Pictured: Employees of an aid organisation at a newly established coronavirus testing station in Dortmund, western Germany, earlier this week

The head of Germany’s doctors’ union declared on Tuesday that the country is already in the midst of ‘a second, shallow upswing’ because people have flouted social distancing rules.

Two weeks ago the average number of new daily infections was 460 but just yesterday the country recorded 1,024.

Ms Johna said there was a danger that a longing to return to normality and a suppression of containment measures would fritter away the success Germany had achieved so far, urging people to stick to social distancing and hygiene rules and wear masks.

Similarly, cases in Greece have spiked to a three-month high of 121 new infections on Tuesday with a further 119 recorded yesterday.

Greece’s prime minister warned earlier this week that new restrictions may be needed if a worrying rise in daily cases does not abate.

‘Any form of complacency is unjustified,’ Kyriakos Mitsotakis said. ‘We still don’t know how… many months we will be forced to live with the virus.’

Spain, which is currently the worst-hit nation in Europe, saw 8,500 new cases over the weekend and recorded another 2,953 just yesterday.

An all-inclusive resort in Majorca was shutdown after ten staff fell sick with the virus and two towns north of Madrid have been put under strict lockdown.

Italy – once the sickman of Europe – has managed to avoid an uptick but two cruise ships are now quarantined in the Civitavecchia port in Rome.

END_OF_DOCUMENT_TOKEN_TO_BE_REPLACED

WARNING: This story contains details some may find disturbing. Discretion is advised. Police in Bareilly, India, have arrested a man for allegedly slashing his pregnant wife across the stomach to “check the gender of the unborn child.” The attack left the mother critically injured and caused her to miscarry the

END_OF_DOCUMENT_TOKEN_TO_BE_REPLACED
Recent Posts
We and our partners use cookies on this site to improve our service, perform analytics, personalize advertising, measure advertising performance, and remember website preferences.Ok