The Andrews government faces a clash in State Parliament this week over claims it is "turning a blind eye" to blatant religious discrimination in Victorian schools.

Non-Christian applicants for taxpayer-funded school counsellor jobs are still being denied employment on the grounds of their faith, despite the state government agreeing last year to stop the practice.

The state’s anti-discrimination authority believes schools, hiring under the federal government’s National Schools Chaplaincy Program but only offering jobs to Christian applicants, are in breach of the state’s equal opportunity legislation but has made no move to challenge the status quo. 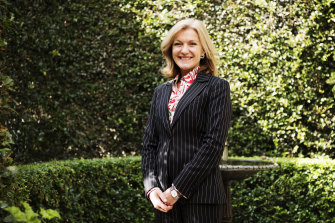 The Victorian government is heading for a parliamentary clash with the Reason Party’s Fiona Patten over perceived religious discrimination in schools.Credit:James Brickwood

But Reason Party MP Fiona Patten will bring forward legislation in Parliament this week aimed at forcing the government to uphold its own human rights and equal opportunities legal regime.

The states have run the national $61 million-a-year program on behalf of the Commonwealth since 2014 using federal money to pay the chaplains’ wages, but Victoria amended its hiring policies and practices in 2019 after a legal challenge from a school counsellor who had been denied work because they were an atheist.

But schools are still advertising for chaplains under the scheme, making it clear in their recruitment material that only Christian candidates will be considered.

“School chaplains provide pastoral care and work closely with allied health staff in schools to support the wellbeing of students, staff, families and the wider school community,” a spokesman for the minister said.

The government is likely to oppose Ms Patten’s bill when it comes for debate in the upper house on Wednesday or Thursday.

But Monash University constitutional law expert Luke Beck said it was outrageous that the government was allowing schools receiving public money to pay chaplains to discriminate on the grounds of religion.

“The Victorian government’s own written policy rules say there should be no discrimination in the chaplains program and yet there is,” Associate Professor Beck said.

“The government knows this is going on, the government could stop it, the government even has a legal obligation under the [Equal Opportunities] Act to stop it and yet, for whatever reason, the Victorian government is choosing to turn a blind eye and do nothing about it.”

The National Schools Chaplaincy Program has been controversial since its introduction by then prime minister John Howard in 2006. The deal with the states to run the scheme allowed it to continue after the High Court found in 2014 that it was unconstitutional for the Commonwealth to funnel cash directly to state schools.

The office of federal Education Minister Dan Tehan was contacted for comment on Saturday.

Ms Patten said no public school should be allowed to discriminate against potential employees on the basis of their religion.

“A public school should be able to hire the very best and most-qualified staff members to support its student body, but that staff member’s religion shouldn’t have any bearing on their employment," she said.

“Parents expect that when they send their child to a Victorian public school, they will be both secular and inclusive, as well as multi-faith and multicultural.”

END_OF_DOCUMENT_TOKEN_TO_BE_REPLACED

END_OF_DOCUMENT_TOKEN_TO_BE_REPLACED
Recent Posts
We and our partners use cookies on this site to improve our service, perform analytics, personalize advertising, measure advertising performance, and remember website preferences.Ok