Home » World News » From the Archives, 1905: The ill-fated final voyage of the Loch Vennachar

From the Archives, 1905: The ill-fated final voyage of the Loch Vennachar 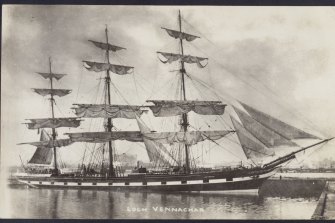 A postcard of the Loch Vennachar.Credit:State Library of Victoria

A correspondent at Hog Bay, Kangaroo Island, telegraphed news tonight which seems to indicate that a wreck has taken place close to Backstairs Passage, a few miles south-west of Cape Willoughby. The wreckage is presumed to belong to the missing ship Loch Vennachar, which is overdue from Glasgow.

The correspondent states: “I have just returned from my father’s farm at Cape Hart, Kangaroo Island, where I have been since Sunday afternoon. Late the same evening I noticed fresh wreckage washing up on the rocks. On Monday morning I set out to investigate, and walked along the coast about twelve miles to the westward, and the whole distance was littered with unmistakeable evidence of a fresh wreck having taken place. Broken whisky casks, marked ‘Glasgow,’ and smelling strongly of spirits, were plentiful. A ship’s figure head, painted white, was also seen. Several tins of kippered herrings were picked up, and many broken cases were lying about, some being marked ‘James M. Davidson, fish and meat preserver, Glasgow and Aberdeen.’ Most of the wreckage was smashed to small fragments, among which could be seen part of deck houses, deck planks, freshly painted. A roll of paper was seen marked, ‘Portobello, superfine.’

“On Tuesday I renewed the search, which led to similar results. No sign of human life was visible. The fact that the winds prevailing along the coast recently have been southerly leads me and others to surmise that a catastrophe has taken place on a reef which begins about ten miles south of Cape Hart, where heavy seas have been seen to break for several week past.”

The wreckage is thought to come from the missing Loch Vennachar.

Captain Hawkins, in command of the Loch Vennachar, would have a complement of about 30 hands, including a number of apprentices, who are usually carried by the “Loch” liners.

Since the steamer Yongala passed the Loch Vennachar on 6th September, west of the Neptunes, nothing has been heard of the vessel. Since then very heavy weather has been encountered along the South Australian coast line, and it was believed by seafaring men that Captain Hawkins had deemed it prudent to tack down south, in order to escape the fur of the gale.

The spot where the wreckage has been washed ashore is at the extreme south-east of Kangaroo Island. It is known that the Loch Vennachar had on board a quantity of paper as cargo. At the south-west corner of the island lie the remains of another “Loch” liner, the Loch Sloy, which went ashore on 24th April, 1899, and became a total wreck.

When the vessel struck there were 35 souls on board, but only four persons were washed ashore, and these remained on the island for a fortnight, during which time they suffered great privations, but managed to subsist on dead penguins.

Mr J. C. Neil, of Messrs. Wills and Co, agents for the Loch Vennachar, when seen tonight said he was unable to identify the articles washed ashore from the description. He, however, thought the figurehead probably belonged to the Lock Vennachar, and he looks upon the finding of this article as almost confirming his worst fears.