Home » World News » From the Archives, 1934: A plague of grasshoppers ravages Victoria

From the Archives, 1934: A plague of grasshoppers ravages Victoria

GRASSHOPPERS IN THE MALLEE

Disconcerting official reports were received in Melbourne late yesterday from the grasshopper infested areas in the north-western and north-eastern Mallee. These indicated the probable spread of the plague which is ravaging crops and grass in several large areas in spite of the strenuous efforts of State experts, land officers, shire councils and hundreds of volunteers and farmers, to check the plague by means of poisoned baits. This method is killing a large percentage of hoppers, but a proportion are now reaching the dangerous winged stage. 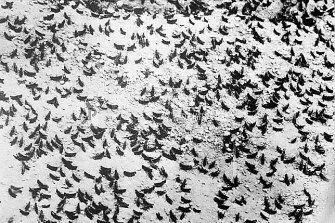 Grasshoppers cross the Murray Valley Highway in search of food in 1934.Credit:AP

Experience in other countries, and even in Queensland, New South Wales and South Australia, has indicated that the winged hoppers cannot be controlled. As hoppers, they crawl along the ground, and devour the poisoned baits. When wings develop they lay their eggs and fly off to green crops and pastures.

Official reports received yesterday by the Closer Settlement Commission which is handling 2600 settlers in the Mallee, including farmers receiving cultivation advances, were that in the parish of Calignan, which is between Manangatang and the Murray, the hoppers were extremely thick, and were beginning to fly in small batches. It is officially expected that within a few days, and perhaps a week, myriads of the hoppers will have developed wings.

Some idea of the devastation that the grasshoppers are causing where crops and pastures are green is obtained from a report from Calignan, that on the holding of Mr Saxton, a son of the chief inspector of primary schools, the grasshoppers destroyed 20 tons of wheat crop in two hours. The official report from this are stated that the winged hoppers in swarms were going through the wheat crops, eating the flag, but not affecting the head (or wheat), and passing on to grass lands were eating out “in a face”. As the wheat crops mature or dry there is less ganger, but cops in this district are green.

Another official report from the Bumbang Peninsula, on the Murray, and including the Robin Vale and Annuello districts, intimated that the grasshoppers were thick, and devouring the herbage. At Carwarp the position is similar. Mr Allnutt, M.L.A., communicated with the commission yesterday from Mildura, and stated that in one district the grasshoppers covered an area 20 miles long by 6 miles in depth. He said that relief parties would be ready to leave as soon as poison bait was available.

Apprehension is felt in official circles for the safety of 300,000 acres of vines now commencing to fruit in the Mildura, Red Cliffs and Merbein districts. It is estimated that the setting of fruits is such that if it is allowed to develop will return the growers £1,000,000 in a few months. A member of the Closer Settlement Commission, which is providing poisoned baits for the stricken areas, said yesterday that although the dried fruit areas were not affected it was confidently expected that while the hoppers did not develop wings the precautionary measures now being adopted would protect the vineyards. They are being surrounded with poisoned baits. As a further precaution a considerable quantity of spraying material, including arsenate of lead, has been forwarded by the commission to Red Cliffs to be added to the sprays soon to be used on the vines to prevent black spot.

The grasshoppers are dense in the Perlta and Benetook districts, according to official reports to the commission, and a more intensive campaign is being waged by voluntary workers from Mildura. But it was reported that the hoppers were working both south and east, and there is an official fear that the plague may soon spread over towards Swan Hill and Kerang if not soon checked in the hopper stage.

Anxiety is also felt at the unknown quantity of hoppers which exist in north-western areas which are thickly settled. It is feared these may prove breeding grounds, particularly as there is good grass in the areas. Yesterday 25 scouts were sent out to make investigation.

A few days ago there was practically no bran available for baits in Mildura, but supplies have now been replenished. Yesterday the Closer Settlement Commission acquired 100 tons at a country town, and the Railway department sent a special engine from a town 30 miles away to shunt trucks so that 60 tons could be despatched to the Mallee early this morning. At the moment there is a strong overseas demand for bran. By tomorrow morning another 70 to 80 tons of bran, molasses and arsenate of soda will be in the stricken areas to be made into baits. One ton of arsenate of soda will provide baits for 100 miles. Baits are now being laid in strips a mile in length and seventy chains wide. It was stated by the commission yesterday in the northern Mallee to do 400 to 500 miles on the system now being used. There is no shortage of materials.

So far the damage caused to pastures is not serious enough to justify the removal of sock.