‘Don’t buy a home here until you have spoken to me’: Furious homeowner erects sign warning other would-be buyers after finding leaks, damaged walls and ripped carpets in his £440,000 new-build four-bed house

An enraged homeowner has hung a banner from his new-build home urging potential buyers not to buy a house on the estate before talking to him.

He says the developer who built their home, Abbey New Homes, did not respond to their calls or emails to remedy the faults, so they decided to take action.

Mr Correa put up a large banner on the front of his detached home, which read ‘don’t buy a home here until you have spoken to me.’ 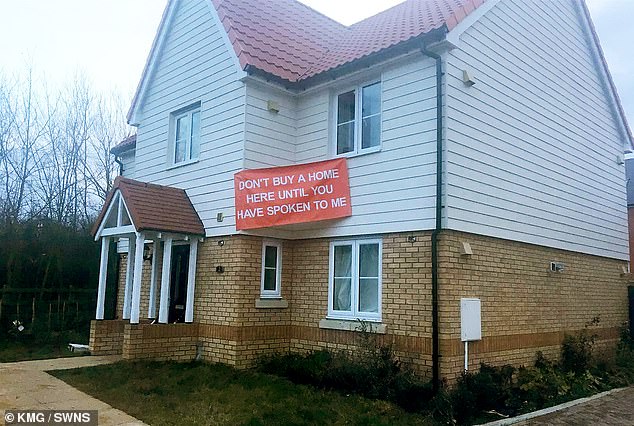 Bruno Correa, 39, put a banner up on his home after finding it had a myriad of issues when he moved in. Among the faults were leaks, damaged walls and ripped carpets

The next day an Abbey Homes staff member showed up the next day, months after the Correas had first tried to contact them.

Mr Correa said: ‘They turned up with my emails and pictures telling me they’ll get it sorted as soon as possible. I just thought ‘do they think I’m stupid?’

The staff member asked him to remove the banner, but he refused to do so until they fix the problems with his house.

Mr Correa explained he has had ‘four to five’ people turn up at this door each day after spotting the banner.

The big red sign is visible from a nearby road on a hill with a clear vantage point onto the house.

The courier business owner said: ‘It’s a really nice house, but we’ve had to pay out of our own pocket to make it nicer. We just want it to be finished and are sick of waiting.’

He added: ‘I’ve spent thousands of pounds of my own money trying to fix it myself. I wouldn’t recommend anyone else buying a place here.

‘My friends have recently moved into new builds in Greenhithe and I’m ashamed when they’re round because of the difference.’

END_OF_DOCUMENT_TOKEN_TO_BE_REPLACED

END_OF_DOCUMENT_TOKEN_TO_BE_REPLACED
Recent Posts
We and our partners use cookies on this site to improve our service, perform analytics, personalize advertising, measure advertising performance, and remember website preferences.Ok