Lincolnshire Police officers have come under fire after footage posted to the ‘woke’ force’s social media account showed them dancing the Macarena at the city’s Pride festival.

Locals have reacted with fury after multiple posts were made showing on-duty officers having fun on the force’s social media accounts from the festival, including the video of officers dancing.

Residents have criticised the force’s coverage, asking why officers were spending time at the festival instead of fighting crime on the streets.

But Chief Constable Chris Haward has hit back at critics, saying officers were present to ensure everyone enjoys a ‘safe’ Pride.

He added he ‘expected’ his officers to engage with the community and ‘join in, even dance’ – as long as it did not distract from their duties.

A dispersal order had to be issued jut a couple of hours later after a number of large fights in the city. 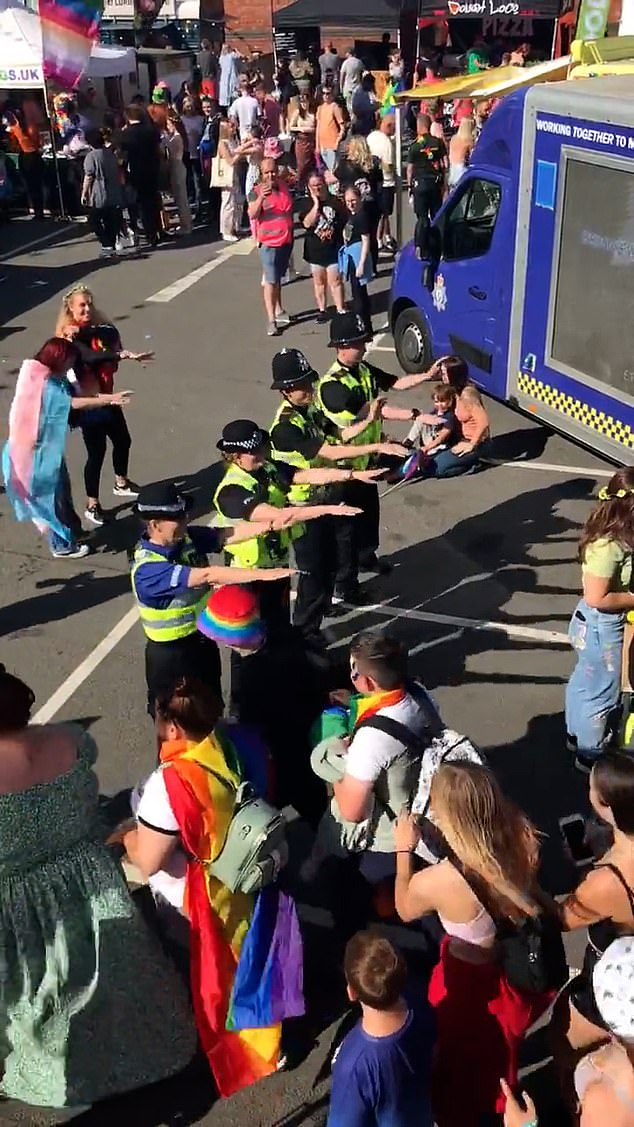 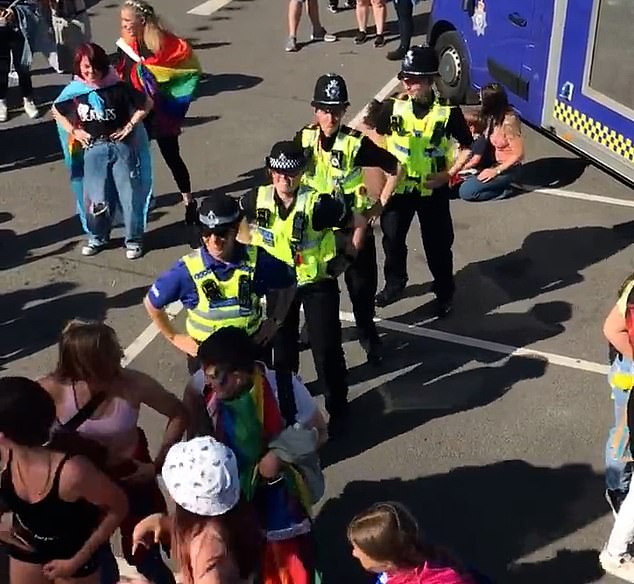 The officers may all be able to keep in time, but many questioned why they were on-duty at the festival instead of fighting actual crime

The footage shows dozens of people in colourful clothing, holding LGBTQ+ flags, enjoying themselves at the festival while loud music plays in the background.

Around 11 people can be seen dancing along to the Macarena in the video, four of whom are fully uniformed police officers.

Many others stand around watching the officers.

The force appears to have posted photos and videos online in order to demonstrate their engagement in the community – but their decision backfired after backlash quickly emerged across social media.

Just two to three hours after the video was shared on social media, police issued a different tweet announcing a dispersal order had been put in place across the city centre after a number of large fights in the previous 24 hours.

Many on social media pointed to the dancing officers and questioned why they were not fighting crime instead of dancing at the festival. 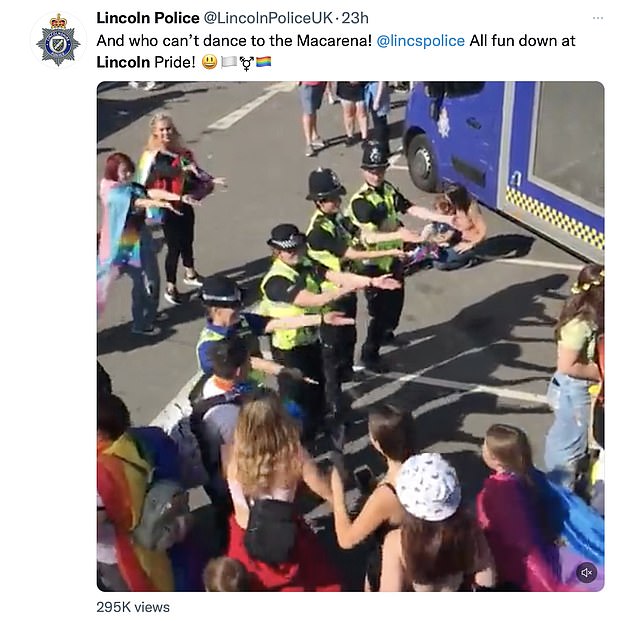 One social media user said the video made her feel ‘less safe’ on the streets, adding: ‘I want a police force that takes MVAWG (male violence against women and girls) seriously.’

A second added: ‘What a joke Lincoln Police, please do the job you signed up for, show respect for the uniform you’re wearing.’

A third said: ‘Fellow Lincoln residents. Next time you’re being burgled and want to police to actually attend, tell the operator there’s a pride event at your house.’

But some did praise the police officers for getting so involved in the community. One local said it was a ‘shining example of policing’ to see such community liaison.

Chief Constable Chris Haward released a statement today which said: ‘Lincolnshire Police officers are at Pride to make sure that everyone attending experiences a safe and happy event.

‘Lincoln Pride is a celebration of inclusivity and representation within the LGBTQ+ community and, as Lincolnshire Police, we are there to support them and build confidence in our service.

‘I expect my officers and staff to engage with people attending Pride; to chat, laugh, join in, and even dance, where it is appropriate to do so and does not detract from their duties.

‘Policing is not just about enforcement and patrol but about engagement, understanding and being part of the community.

‘We want everyone attending Lincoln Pride to know that we are there for them and that our service to Lincolnshire communities is truly inclusive, we aim to treat every member of the public we serve with fairness and impartiality.

‘Pride is one of the many wonderful community events in the county that we are there to police but also to allow people to look behind the uniform and see who we are.’ 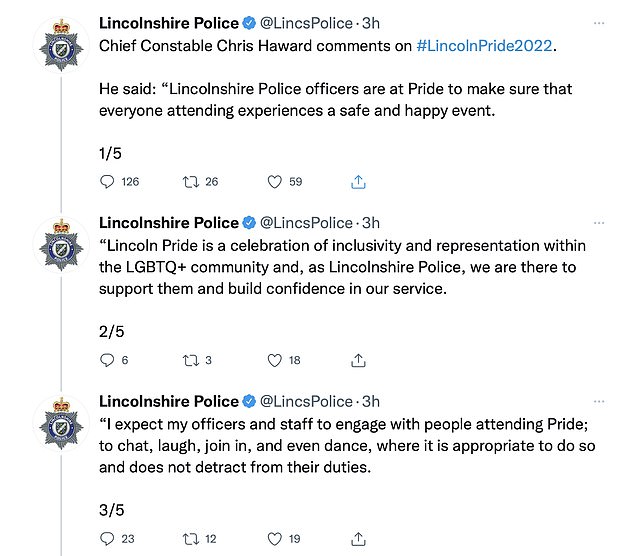 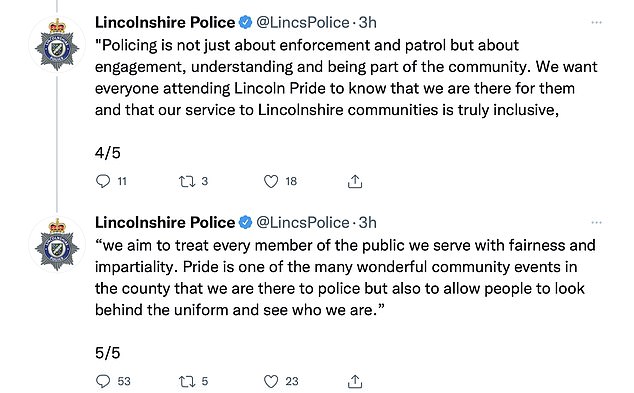 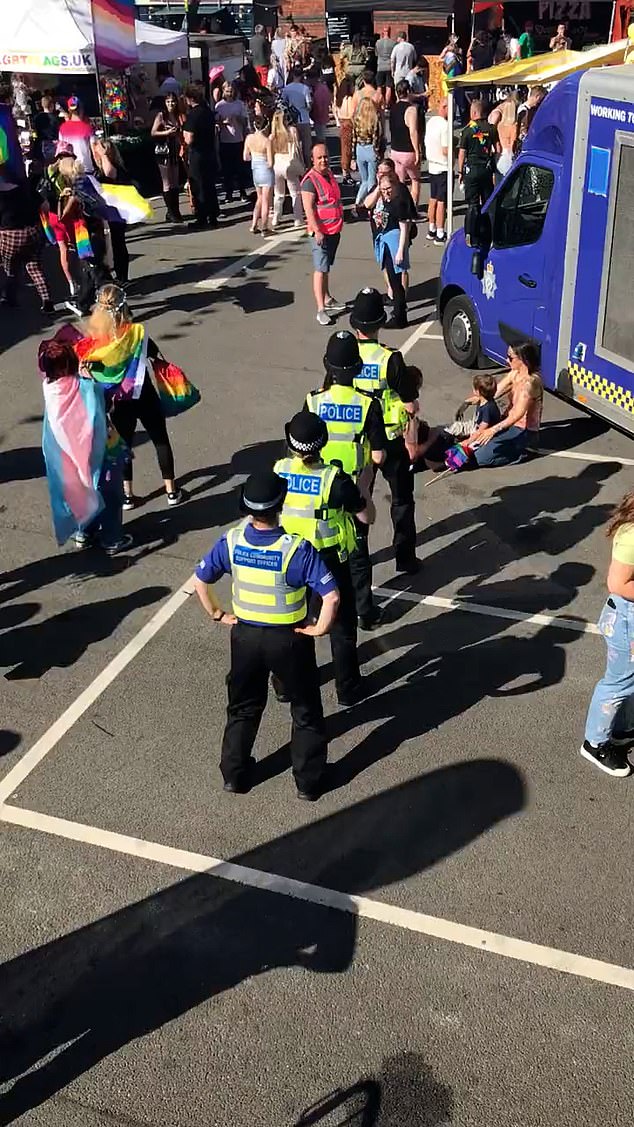 To begin with, the police officers were almost the only people dancing to the music in the area

It comes at a time when police are increasingly under pressure for high levels of unsolved crime.

Figures released in June this year show police failed to solve a single burglary in nearly half of the country’s neighbourhoods sin 2019, figures have revealed.

Of more than 32,000 communities analysed, 16,000 – equivalent to 46 per cent – had all their burglary cases in a three-year period closed with no suspect charged by police.

Almost 2,000 of the neighbourhoods – each containing around 3,000 residents – recorded at least 25 burglaries, but none were solved.

Forces are also under increased scrutiny after a wave of scandals over the last 18 months, particularly in London.

The abduction, rape and murder of Sarah Everard by a serving Metropolitan Police officer, as well as the unlawful policing of a vigil in her honour shocked the country, but dozens of instances of crimes against women and girls by serving officers have since emerged across the UK.

Strip searches of children have also led to huge backlash from the public, particularly those in ethnic minority communities, who are disproportionately targeted for stop and searches.

There are fears that crime levels could increase as the cost of living crisis worsens into next year.