Washington: Members of Congress from the polar extremes of US politics have hit out at stock broking firms for banning individual investors from buying shares in GameStop after the video game retailer enjoyed a stunning Reddit-fuelled explosion in its share price.

A sudden surge in trading drove GameStop’s value up by more than US$10 billion on Thursday (AEDT) alone, prompting popular brokerage firm Robinhood to ban users from buying shares in GameStop, AMC Entertainment and other companies. 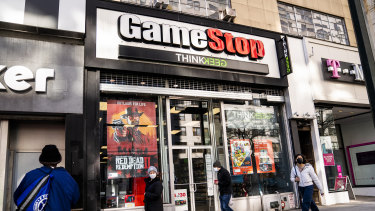 Both Republicans and Democrats are concerned about restrictions on purchases of GameStop shares.Credit:AP

AMC stock had dropped by 50 per cent in afternoon trade on Wall Street while GameStop lost 32 per cent.

Large hedge funds were still able to buy and sell stock, prompting anger that the system was “rigged” against retail investors.

Alexandria Ocasio-Cortez, one of the most prominent progressives in Congress, reacted to the announcement on Twitter by saying: “This is unacceptable. We now need to know more about @RobinhoodApp’s decision to block retail investors from purchasing stock while hedge funds are freely able to trade the stock as they see fit.”

Ocasio-Cortez, a member of the House Financial Services Committee, said she would support a congressional hearing into the issue.

Republican Senator Ted Cruz, one of the most conservative members of Congress, responded to Ocasio-Cortez’s tweet by saying: “Fully agree.”

Ocasio-Cortez replied that she was willing to work with other Republicans on the issue but not Cruz given he had contested Joe Biden’s election victories in several key states ahead of the January 6 deadly riot at the Capitol.

“I am happy to work with Republicans on this issue where there’s common ground, but you almost had me murdered 3 weeks ago so you can sit this one out,” she said.

Democratic congressman Ro Khanna said the affair had “showed how the cards are stacked against the little guy in favour of billionaire Wall Street Traders”.

Khanna called for greater regulation of financial trading, saying he was fed up with hedge fund billionaires who “treat the stock market like their personal playground, then taking their ball home as soon as they lose”.

The value of the GameStop’s shares had risen from $US2 billion to as much as $US24 billion in a matter of days with the price jumping 1700 per cent in the process.

At least two federal lawsuits have already been filed accusing Robinhood of market manipulation for banning the purchase of GameStop (which trades under the acronym GME) and other shares.

“Robinhood purposefully, willfully, and knowingly removing the stock ‘GME’ from its trading platform in the midst of an unprecedented stock rise thereby deprived retail investors of the ability to invest in the open-market and manipulating the open-market,” a complaint filed by Robinhood user Brendon Nelson in the Southern District of New York stated.

“Since pulling the stock from their app, GME prices have gone up, depriving investors of potential gains.”

Donald Trump jnr, the former president’s son, also hit out at Robinhood, tweeting: “It took less than a day for big tech, big government and the corporate media to spring into action and begin colluding to protect their hedge fund buddies on Wall Street.

“This is what a rigged system looks like, folks!“

END_OF_DOCUMENT_TOKEN_TO_BE_REPLACED

Meghan Markle has taken aim at the royal family – claiming her biggest regret was "believing I would be protected". ITV will show Meghan Markle and Prince Harry's interview with US TV host Oprah Winfrey in full on Monday night and on ITV Hub. In the talk, Meghan said she