Home » World News » George Pell not ‘fit and proper’ to be archbishop or priest, lawsuit claims

George Pell not ‘fit and proper’ to be archbishop or priest, lawsuit claims

Lawyers acting for the father of a former choirboy have claimed the former senior Catholic cleric was not a fit and proper person to be a priest or the archbishop of Melbourne because of his knowledge of other instances of abuse inside the church.

Documents filed in August last year and publicly released on Friday also allege that Pell was “prepared to use opportunities afforded to him to act upon his sexual proclivities towards boys under 16 years of age” and that they would introduce evidence to that effect. 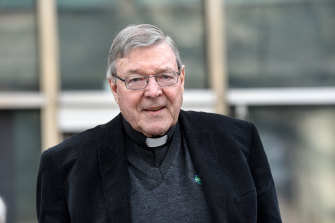 Prosecutors alleged that two former choirboys were sexually abused by Pell in Melbourne’s St Patrick’s Cathedral in the 1990s.

Pell was in 2018 found guilty by a County Court jury of abusing two teenage choirboys in the cathedral after a Sunday Mass in December 1996.

Those convictions were quashed by the High Court in 2020 and Pell was released from prison after more than a year in custody.

The documents list several allegations of abuse that have been made against Pell since the early 1960s and also allege that he was not a “fit and proper person to serve as a priest, nor as Archbishop of Melbourne”.

“[Pell] became aware of allegations and instances of sexual abuse and other sexually inappropriate conduct by members of clergy … [Pell] failed to properly consider and take appropriate action in relation to sexual abuse by members of the clergy,” the statement of claim, lodged by lawyers acting for the father, listed with the court under the pseudonym RWQ, says.

“[Pell] took steps to avoid sexual abuse and sexual misconduct by the clergy becoming known … [Pell] failed to report or prevent sexual abuse by members of the clergy.”

The plaintiff’s lawyers cite examples that Pell was aware of multiple cases including that of Doveton parish priest Father Peter Searson and Father Nazareno Fasciale, which they suggest he should have acted upon.

In 2020, the full bench of the High Court found there was a “significant possibility” an innocent person was found guilty at trial. Pell pleaded not guilty and maintained his innocence. 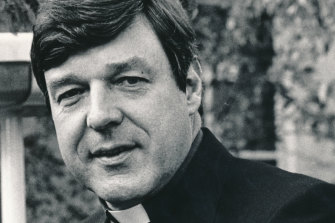 George Pell in 1987, when he was rector of Corpus Christi College, Clayton.Credit:Simon Corden.

At the County Court trial, one of the former choirboys gave evidence alleging he and his friend were abused after a Sunday Mass by the church leader, who in 1996 was the archbishop of Melbourne.

One of the former choirboys died in his 30s in 2014 from an accidental heroin overdose, having never made a complaint against Pell.

That man’s father has lodged a civil case in the Supreme Court to sue the Catholic Archdiocese of Melbourne and Pell.

On Thursday Pell’s lawyer, Nicholas O’Bryan, said the cardinal “absolutely denies the allegations and will be defending the claim”. Specific details of Pell’s defence were not released by the court on Friday.

Pell, now 81, is a past archbishop of both Melbourne and Sydney and rose from being Australia’s most senior Catholic figure to become the treasurer of the Vatican, until his criminal case in effect ended his tenure in senior ranks of the church.

In May 2020 the Royal Commission into Institutional Responses to Child Sexual Abuse found Pell knew nearly 40 years ago that notorious paedophile priest Gerald Ridsdale was being moved out of a small, Victorian country parish to protect the Catholic Church from scandal.

The case will return to court on August 4.