Public health experts say Victoria’s lockout of unvaccinated people should end when vaccine rates top 90 per cent, with one saying the threat of indefinitely banning people from cafes and cinemas is contributing to radicalisation.

Leading pandemic specialists Julie Leask, Catherine Bennett and Tony Blakely argue Victoria’s vaccination rate, on track to reach 95 per cent next month, is high enough to protect the state from any increased transmission that might happen if unvaccinated were given the same rights as those who’ve had their jabs. 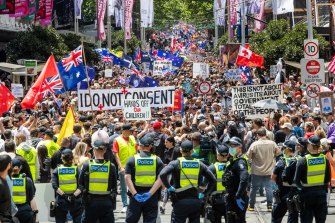 Victoria’s vaccine mandate for essential workers is the most expansive in the country. The compulsory vaccine policies have emerged as the latest flashpoint in pandemic hostilities between state premiers and Prime Minister Scott Morrison, who spoke out against mandates while under growing internal pressure to overturn state rules.

The NSW government committed months ago to allowing unvaccinated people back into the economy at the 90 per cent vaccine target (which shifted to 95 per cent). In contrast, Victorian Premier Daniel Andrews said last month that the two-tiered rules would continue until 2023, and last week said they would last “at least” until the Australian Grand Prix in April.

On Tuesday, Mr Andrews said he “hoped” the restrictions would be released sometime in 2022 when most people had a booster shot. He said he might say more about the timeline for the vaccinated economy when Victoria’s numbers reach the mid-90s.

And as the state recorded 19 deaths with 313 people in hospital on Tuesday, he hit out at federal MPs who called for the end to vaccination mandates. He said Victoria would not have reached almost 90 per cent vaccination without the carrot of eased restrictions and the stick of mandates.

“We’ve made some tough calls, and that’s meant that nine in 10 Victorians have gone and got the jab. That’s great news for them and great news for all of us because we’re open, and we’ve essentially got no rules.”

Mr Andrews’ tough approach, set against the backdrop of regular well-attended demonstrations against his vaccine policies, has also opened up a new front in the Victorian political arena. Opposition Leader Matthew Guy last week stated vaccinated economy rules should drop at the 95 per cent mark, as will happen in NSW.

Professor Leask, an immunisation policy expert at the University of Sydney, said Victoria’s vaccination rate was almost high enough to allow unvaccinated people back into society, after which she said ongoing lockouts were unreasonable.

“To make the requirement ongoing is not proportionate to the harm it brings; for people’s travel and their everyday life. It can create these radicalisation effects, we see that in history,” she said, adding that recent protests in Victoria were unsurprising.

“When you bring in hard mandates with severe consequences, some will dig in further, become more alienated, less trusting and less willing to comply with other things. It can actually give vaccination and primary healthcare a bad name by using [mandates] to weaponise and please the populace.”

Professor Blakely, an epidemiologist at the University of Melbourne, said the government was probably pursuing lockouts to encourage vaccine uptake, but the 90 per cent vaccination target was “about right” as a point to end the different sets of rules.

“Weighing everything up, epidemiologically, looking at societal factors and human rights, you can make a case for letting the unvaccinated out at 90 per cent,” he said. “However, it will add some fuel to the fire and mean outbreaks are more likely and that our path will be bumpier.”

According to Professor Bennett, the epidemiology chair at Deakin University, the government should end the lockout if cases do not surge as a result of unvaccinated people being allowed in retail outlets. Due to a quirk in the state’s road map, unvaccinated people could enter retail outlets after the 80 per cent vaccine threshold but are now banned at the 90 per cent threshold.

“Going forward there wouldn’t be an epidemiological argument, but there might be in certain circumstances if there was a large surge in infection rates,” she said.

“Once you get to 90 and 95 [per cent], you have such a small population of unvaccinated people who could contribute to transmission dynamics in a major way. It becomes even lower over summer as more people are exposed,” she said. “There’s not enough to undermine what we’re trying to achieve or to overload hospitals.”

Deakin University senior research fellow Josh Roose said the government’s “hardline” approach to vaccination was being exploited by protest organisers to frame the government as tyrannical and anti-democratic.

“[Mr Andrews] knows he is on a winner when it comes to anti-vax messaging because the majority of people are on board, but it doesn’t necessarily help and may even reinforce a reluctance to get vaccinated by people who believe they are being forced,” Dr Roose said.

“If there is anything the government has learnt based on polls, it’s that playing tough works, even if it provides fuel for fringe protest movements.”

The researcher said the lockout punished many non-English speaking people – who he said did not have a presence at protests and had no links to far-right groups – who resist vaccines because of misinformation in some migrant communities.

Asked last Tuesday whether, at the 95 per cent vaccine target, it was time to end the lockout and stop using emotive language to describe anti-vaxxers, Mr Andrews said: “This is not about rhetoric.”

“Every avoidable admission in hospital – because, with respect, people have made the wrong decision not to get vaccinated – is a bed, a space, that is not available to someone who’s had a heart attack,” he said.

Mr Guy, who was criticised this month for initially allowing his MPs to attend protests attended by anti-vaxxers, said at the 95 per cent mark Victoria “should move on like NSW has”.

“So NSW has no rules for anyone and Victoria’s going to have a vaccinated economy for months to come. I don’t see the point,” he said.

Professor Leask, a World Health Organisation adviser who chairs the agency’s behavioural and social drivers and vaccination working group, said compulsory vaccines were warranted in limited circumstances, such as for healthcare workers. However, she said mandates were inherently coercive and more difficult to justify when applied to too many sectors of society for longer periods of time.

“When we reach a sufficient level of vaccination, the value of locking people out is tiny, and we need to pull back and let unvaccinated people participate. We need to ask ourselves whether we are willing to keep allowing the 5 per cent of the population to continue paying that price,” she said.

Professor Blakely said the potential increase in transmission caused by unlocking the unvaccinated could be offset by maintaining measures such as mask-wearing in crowded places, social distancing and working from home a couple of days a week.

“Not allowing the unvaccinated out reduces the chance of a serious outbreak in the next six months. It also means, in theory, we don’t need to have tough measures to compensate,” he said.

“But at some point you can’t continue with that, and you need to let people back into society.”

A Victorian government spokesman said nearly 90 per cent of Victorians were double vaccinated and more than 93 per cent have had one dose. “Victorians are united when it comes to getting vaccinated to protect themselves and their community, and they have come forward in record numbers to demonstrate that,” they said.

Stay across the most crucial developments related to the pandemic with the Coronavirus Update. Sign up to receive the weekly newsletter.