On chilly mornings in the wintry fog, Deborah Kemp can picture Ned Kelly emerging from the bushland at Glenrowan through the hail of bullets as he battled with police at his final stand.

“Just imagine that clunky armour,” she said. “When we get those misty mornings you can just see it.” 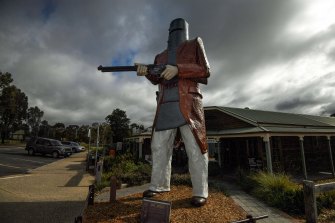 The statue of Ned Kelly at GlenrowanCredit:Joe Armao

In 1880 Ned Kelly tried unsuccessfully to sabotage the train tracks running through Glenrowan before the siege that ended with his capture.

Now the train line is the subject of a new fight over the bushranger’s legacy, centring on a proposed railway bridge set to tower over Glenrowan.

Opponents of the new bridge fear it will undermine a new tower and visitor centre that is planned to improve Glenrowan’s tourism experience, which many people believe is lacking.

Ms Kemp, a heritage consultant who lives nearby, argues the bridge will permanently damage the town’s heritage value and spoil the arresting image of Mount Glenrowan rising above it. 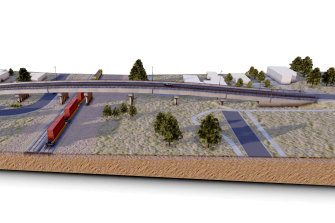 “It would be a shame to see that looming presence lost from the site because of this industrial-scale bridge.”

New artists’ impressions of the proposed overpass have fuelled concerns among those opposed to raising its height.

The proposed bridge will be much taller than the existing six-metre structure, reaching 8.1 metres with additional protective screens rising above it. 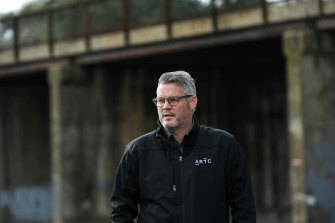 But the Australian Rail Track Corporation insists it is necessary for double-stacked trains to pass underneath as part of the $14.15 billion Inland Rail project.

The corporation’s Victorian projects general manager, Ed Walker, said lowering the tracks was originally the preferred option but that was abandoned due to concerns it would irrevocably change the rail line that Ned Kelly sought to destroy.

“The track is very much part of the siege story,” he said.

Another proposal to move the bridge further north of the town would result in property acquisitions and modifications to the Hume Highway off-ramp, Mr Walker said. 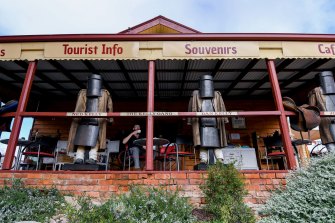 A souvenir shop in Glenrowan trading on the Ned Kelly theme. Credit:Joe Armao

The corporation had conducted community consultation about the project and a planning scheme amendment was still required by the Victorian government.

It declined to give an estimate of the bridge’s cost but construction is expected to begin as early as next year.

“This is a nationally significant heritage site,” she said. “Instead of destroying it, let’s improve it.” 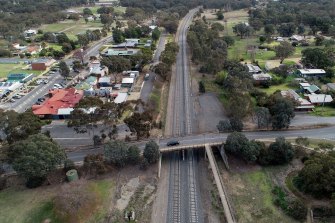 The rail bridge as it currently stands. Credit:Joe Armao

Businesses in the small town trade on the Ned Kelly theme and signs with photographs and descriptions mark out significant spots in the bushranger’s story.

But there is no shortage of voices arguing the tourism experience and public infrastructure in Glenrowan lack the sophistication needed for the town to reach its potential.

A 2018 business case by Regional Development Victoria found the tourism experiences associated with the Kelly story in the region were “failing to connect”.

It proposed a range of projects, including the Glenrowan tower, for towns in Victoria’s north-east that were central to the history of the Kelly gang. But the report noted the divisive nature of Ned Kelly’s legacy also stifled tourism development. 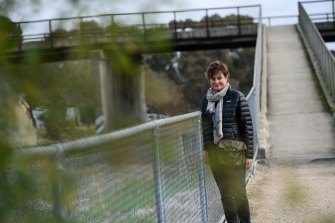 Heritage consultant Deborah Kemp is among those fighting plans for a taller rail bridge at Glenrowan. Credit:Joe Armao

Some people, including many police who are troubled by the Kelly gang’s murder of officers, believe Ned Kelly has been inappropriately glorified with his violent crimes often overlooked.

Rural City of Wangaratta mayor Dean Rees agreed Ned Kelly’s legacy is disputed but insisted that the history of the site at Glenrowan needed to be better preserved.

“Whether you find him a thief and fiend or a hero it’s the most well-known story in Australia,” he said.

Mr Rees argued the viewing tower that will include virtual reality displays would enhance the site while the new, more open bridge would also be an improvement.

“I think more people are coming around to the fact that the new bridge is going to be good in this current location.”

A state government spokeswoman urged the rail corporation to keep working with the Glenrowan community to ensure local views were taken into account.

But Ms Kemp said the corporation was forcing the bridge on the town when there are other options.

She said there were parallels between Ned Kelly’s attitude to authority figures and the fight against the bridge proposed by a major corporation.