Home » World News » Grandfather took his own life after being furloughed, inquest hears

Grandfather took his own life after being furloughed, inquest hears

Grandfather, 72, took his own life after he was furloughed and couldn’t see his beloved granddaughter during lockdown, inquest hears

A grandfather took his own life after struggling to cope with being furloughed and not being able to see his much-loved family – in particular his granddaughter, ‘the apple of his eye’ – during lockdown.

Malcolm Mather, also known as Clive, from Stoke-on-Trent, Staffordshire, was found dead by a dog walker near dense woodland last July. Tests later confirmed he had died from hanging.

An inquest heard that the father-of-two had convinced himself he was seriously ill and was going to die. 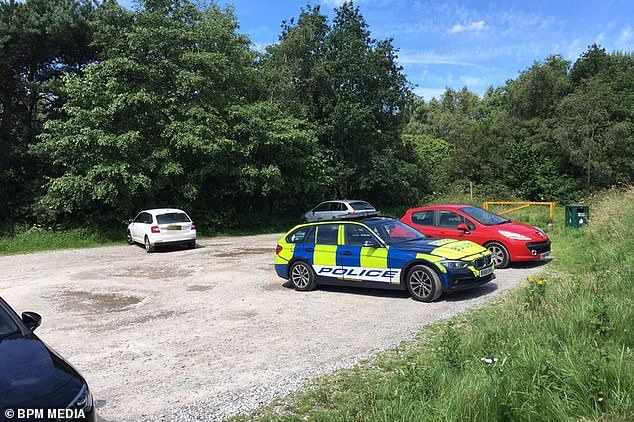 Malcolm Mather, also known as Clive, from Stoke-on-Trent, Staffordshire, was found dead by a dog walker near dense woodland last July. Tests later confirmed he had died from hanging. (Above, police at Park Hall Country Park, where the 72-year-old’s body was found)

But despite Mr Mather being diagnosed with hypertension and a short bout of depression, doctors could find nothing else physically wrong with him.

On July 12, his wife Sandra went out for a morning walk with their two dogs at Park Hall Country Park.

She was surprised to bump into her husband, who had left their house after her and then headed up to the hills.

‘We had a brief conversation and I returned home,’ she said in a statement. As Mr Mather had been known to walk for hours, she wasn’t initially unduly concerned when he didn’t come back.

But by lunchtime, Mrs Mather contacted a neighbour, who said they would go out to look for him and suggested she inform the police.

An officer later knocked on the door of their home in Weston Coyney to break the news that her husband had been found dead.

‘I just felt sick to my stomach,’ said Mrs Mather.

Another dog walker had been near dense woodland in the park when he came across Mr Mather’s body.

The inquest was told that Mr Mather had been furloughed from his job as a mechanic when the first lockdown began last March.

‘He had worked for the company for a long time and was well-respected,’ said Mrs Mather.

Although his job was ‘as safe as houses’, he had started worrying he wouldn’t be able to go back there.

His wife added: ‘He didn’t know what to do with his time. He couldn’t sit there, he couldn’t rest on his laurels. He needed to be doing something.’

To add to his anxieties, Mr Mather was also missing being able to meet up with close relatives, including a son who lived in Manchester.

He particularly missed seeing his granddaughter, who was ‘the apple of his eye’.

In March, he went to A&E and complained of a visual disturbance and headaches. It led to the hypertension diagnosis, although doctors suspect it was related to anxiety.

In mid-May, he reported a cluster of symptoms to his GP, saying he thought they were linked to rheumatoid arthritis. At other points, he also told his family he feared he had Parkinson’s disease.

Mr Mather’s GP advised him to seek help for his anxiety.

But at his last appointment in June, he was ‘rationalising his thoughts’ and appeared to be improving. There were no concerns at the time about him self-harming.

North Staffordshire assistant coroner Sarah Murphy said: ‘There was absolutely no way his family would have been able to see what was going to happen.’

Recording a conclusion of suicide, she added: ‘I’ve heard that he was a very loving man.’