A striking series of photos shows the terrifying moments before and after the D-Day landings as troops fought to liberate western Europe.

The photographs predominantly show North American troops from the US and Canadian armies during the daring operation on June 6 1944.

Terrified-looking US troops can be seen preparing to disembark at Omaha beach on the coast of Normandy and attempting to deal with the chaos of the landing once they finally waded ashore.

Other pictures show casualties being ferried away from the beach on a packed landing craft.

During the offensive, German defences were unexpectedly strong, which led to unexpectedly heavy casualties – and some estimates suggest as many as 5,000 US soldiers were killed or wounded in the attempt to take the beach.

At Omaha in particular the pre-landing bombardment had little effect on the German defensive positions and disembarking US troops were met with fierce volleys of gunfire and heavy artillery.

Nearly 160,000 troops crossed the English Channel on D-Day, and the battle remains the largest seaborne invasion in history. Over 73,000 of the soldiers who took part were from the US. 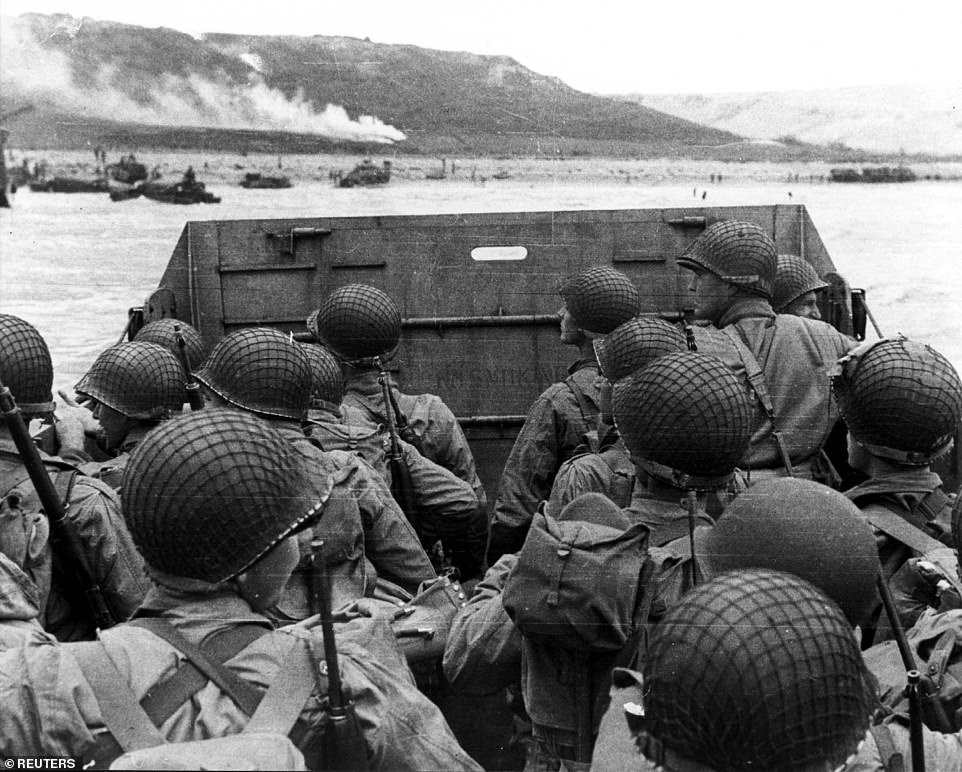 US Army troops in an LCVP landing craft approach Normandy’s ‘Omaha’ Beach on D-Day in Colleville Sur-Mer, France June 6 1944. As infantry disembarked from the landing craft, they often found themselves on sandbars 50 to 100 yards away from the beach. To reach the beach they had to wade through water sometimes neck deep 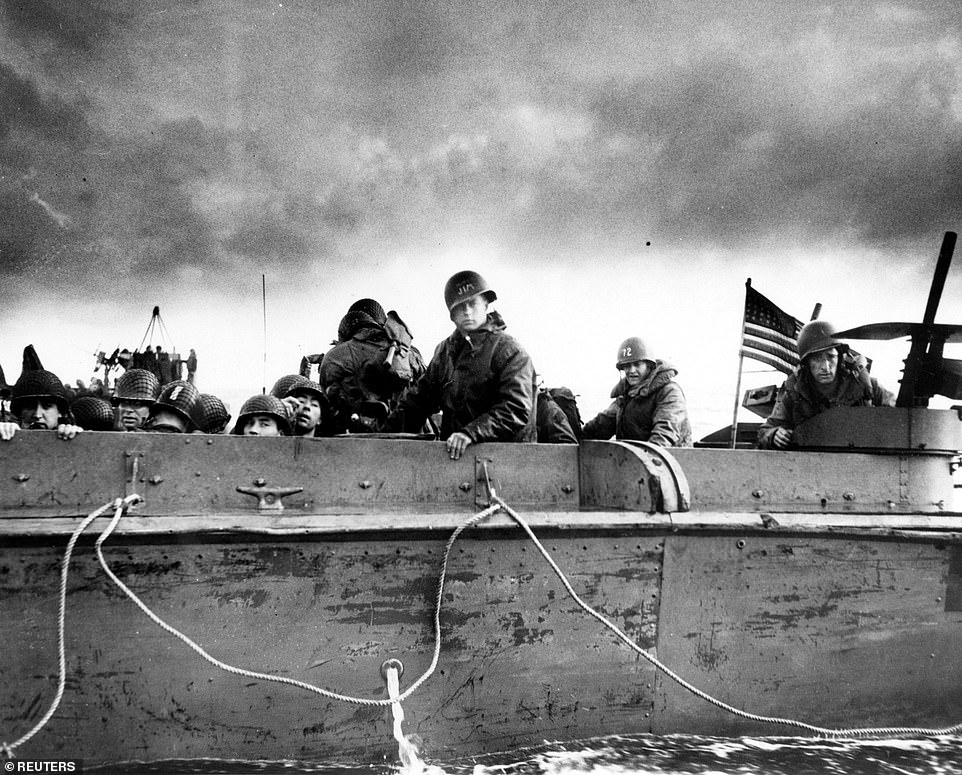 US Army troops and crewmen aboard a Coast Guard manned LCVP approach a beach on D-Day. After the initial landing soldiers found the original plan was in tatters, with so many units mis-landed, disorganized and scattered. Most commanders had fallen or were absent, and there were few ways to communicate 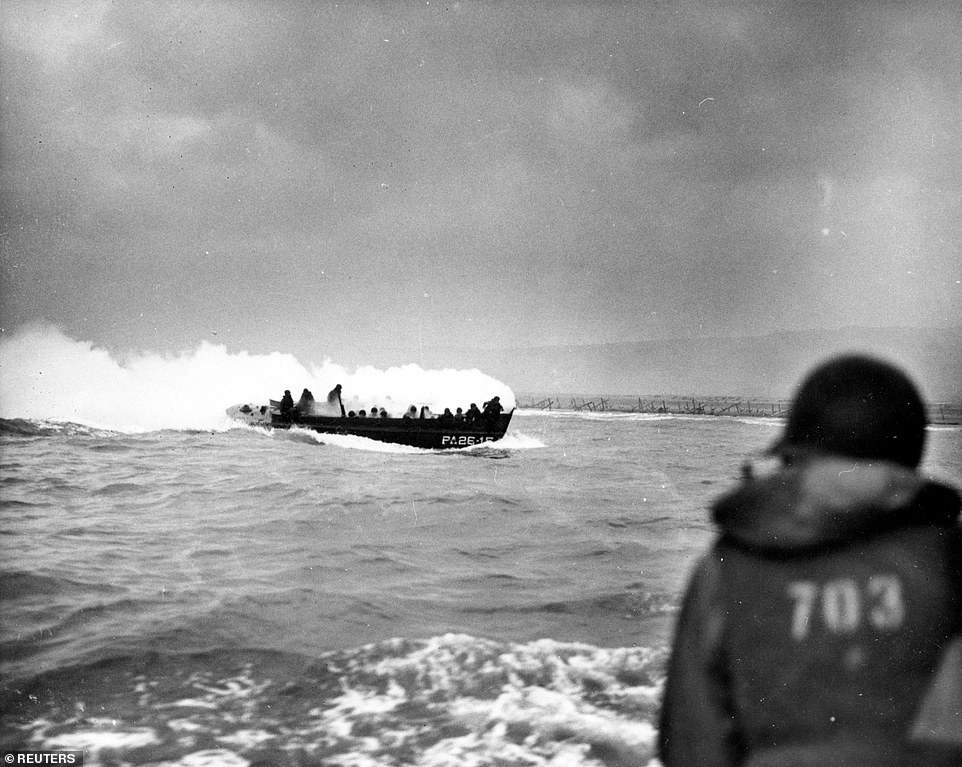 A LCVP landing craft from the U.S. Coast Guard attack transport USS Samuel Chase approaches Omaha Beach. The objective was for the beach defences to be cleared within two hours of the initial landing. But stubborn German defence delayed efforts to take the beach and led to significant delays

It is thought as many as 4,400 were killed in an operation Winston Churchill described as ‘undoubtedly the most complicated and difficult that has ever taken place’.

The assault was conducted in two phases: an airborne landing of 24,000 British, American, Canadian and Free French airborne troops shortly after midnight, and an amphibious landing of Allied infantry and armoured divisions on the coast of France commencing at 6.30am.

The operation was the largest amphibious invasion in world history, with over 160,000 troops landing. Some 195,700 Allied naval and merchant navy personnel in over 5,000 ships were involved.

The operation was the largest amphibious invasion in world history, with over 160,000 troops landing. Some 195,700 Allied naval and merchant navy personnel in over 5,000 ships were involved.

The landings took place along a 50-mile stretch of the Normandy coast divided into five sectors: Utah, Omaha, Gold, Juno and Sword.

The assault was chaotic with boats arriving at the wrong point and others getting into difficulties in the water.

Troops managed only to gain a small foothold on the beach – but they built on their initial breakthrough in the coming days and a harbour was opened at Omaha.

They met strong resistance from the German forces who were stationed at strongpoints along the coastline.

Between 4,000 and 9,000 German troops were killed – and it proved the pivotal moment of the war, in the allied forces’ favour.