Justin Hemmes has never done things by halves. In the past six months the hotel tsar has purchased $200 million worth of pubs and venues across NSW and Victoria in one of the biggest and highest-profile property shopping sprees in recent memory.

Hemmes isn’t showing any signs of slowing. An announcement on a Byron Bay purchase is expected next week – while in the town of Narooma, on the South Coast of NSW, locals have been transfixed by the attention Hemmes’ family company Merivale has brought to the once sleepy town since it snapped up The Quarterdeck in March. The word on the streets of Narooma is that the town’s hotel and restaurant jewel, The Whale, will follow. 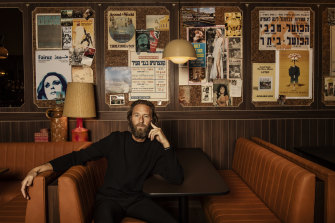 It’s the same story in regional Victoria, where Merivale paid $38 million this week for The Lorne Hotel. Last month the Melbourne CBD was the target, where he paid around $40 million for Tomasetti House.

Hemmes plays his cards close to his chest, declining to name the next targets of his acquisition rollout. But the 48-year-old concedes there are two deals brewing in Narooma and one at Byron Bay (rumoured to be the bar Cheeky Monkey’s). On his home turf in Sydney – where this week he bought Norton’s Irish Pub in Leichhardt for $24 million to go with last month’s purchase of basement space in the historic Burns Philp building on Bridge Street – he’s always on the lookout for the next deal.

COVID-19 was supposed to put the brakes on the hospitality industry, with mass restaurant closures and stagnant growth. Depending on whom you ask, Hemmes has either caught the industry napping or personifies a wildly overheated pub market.

Hemmes says it’s more a case of business as usual. “This is simply a continuation of our growth strategy pre-COVID, which was focused on acquiring great properties like The Royal and 3 Weeds, and creating new experiences in existing venues,” he says. “There is a real excitement for socialising and experiencing life through food and entertainment, so we want to embrace that and keep challenging ourselves to deliver the very best.

“The Lorne Hotel is a great example of an iconic Australian oceanside venue. It is an honour to continue the legacy the previous owners have created and help usher it into a new chapter. We will spend time there before deciding future plans.”

Hemmes’ late father, John, was also a risk-taker. He built a fashion and fledging food empire in the 1970s and 1980s. He gave credit to his son for turning Merivale into a hospitality empire. The family scion worked as a waiter at Merivale’s cafe in Potts Point, then as a kitchen hand, then as a manager at the Angel Hotel and later still as a builder’s labourer at Hotel CBD.

When he was finally given responsibility, Hemmes ushered glamour to the Sydney CBD back when its image was dowdy rather than dashing. Establishment was one of Sydney’s first mega venues, with a fine-dining restaurant, est., and Hemmesphere, the city’s first international-standard lounge bar. Ash Street Cellar sprang up before activated laneways were part of the everyday Sydney lexicon.

So, what can communities across the eastern seaboard expect if Merivale has suddenly snapped up your local? To start, nothing. Hemmes likes to run places as is for a period, taking the temperature of the venue and its regulars. “I don’t believe in changing things for the sake of it, so we always look to identify the things that are working, build on that and embrace what makes it special,” he says.

“Similarly, in areas that aren’t working so well, we look to see what we can do to make improvements. It is really important that each venue is distinctive and captures the soul of what is already there; the last thing we’d ever want is for every pub to look and feel the same.”

Some deals are a longer play. Hemmes bought the Alexandria Hotel in inner Sydney in 2016, almost a year after it closed, for $10 million. Five years later the venue remains dormant and no plans for the site have been announced. The inner-west pub 3 Weeds was purchased in 2019 and has remained closed with plans to reopen in spring.

The rise of the Merivale empire has not been without some controversy. A Federal Court class action is under way amid allegations 14,000 employees were not paid $129 million worth of penalty rates and overtime over a decade. Merivale has said it will continue to defend this class action. The Merivale formula is popular with punters. But neighbourhood pub purchases often spark concerns from residents worried the fabric of their local will be lost to gentrification.

Hemmes says though the secret to success is to strive to create a positive experience for anyone that comes to the venues, and that means an unwavering focus on quality food, service and talent. A big part of his success is his knack for knowing when to spend. In March, the Commonwealth Bank extended its 22-year relationship with Merivale by refinancing its existing debt and providing further funding for future deals.

Where money might be splashed around like cologne on luxe fitouts at restaurants Felix, Bert’s and Mimi’s, other venues might just get a coat of paint and tacos or, as is the case at his hot Bondi eatery, Totti’s, a stripped interior and a few mature trees. It is at the design stage he leans on his sister Bettina. Hemmes is always quick to credit her eye and input.

Not that he doesn’t mind a detail himself. Customers at The Newport were taken aback when the Merivale chief swept in mid-service to change a blown light bulb. When something isn’t right, he isn’t afraid to make changes. Major redesign work was done at Ivy, despite its expensive (and then still new) fitout. When he read a gap for a glam Chinese restaurant at the northern end of the Sydney CBD, Hemmes replaced Tank nightclub with Mr. Wong.

Then there’s the investment in people, the posse of kitchen talent thought to be the biggest high-end chef payroll in the country. Asked last week what the Merivale masterplan is, Hemmes joked “world domination”. Maybe not tomorrow, but don’t rule it out.

Our Morning Edition newsletter is a curated guide to the most important and interesting stories, analysis and insights. Get it delivered to your inbox.