Victoria Police has launched an investigation into a series of violent attacks on mobile speed camera operators after four vehicles were targeted by unknown offenders in the past two months alone.

Three of the incidents involved vehicles and cameras set up on the side of the road in the Bellarine Peninsula and Wollert, while a fourth attack targeted a moving speed camera car in Tullamarine. 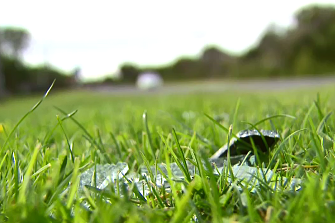 Bits of glass sit on the grass by Bellarine Highway, where the operator was attacked. Credit:Nine News

Officers believe two of the attacks on the Bellarine Peninsula, at St Leonards and Point Lonsdale, could have been carried out by the same person.

In the latest incident, in Point Lonsdale on Wednesday night, an operator had set up a speed camera on the Bellarine Highway when a person approached the car and began smashing the windows with a metal pole or similar weapon.

The attacker managed to break most of the windows and slash four tyres before the operator, who was sitting inside the vehicle at the time, managed to drive to a nearby shopping area and call for help.

Superintendent David Griffin, of the road policing enforcement division, said the operator was unharmed during the attack, which had been “terrifying”.

“I just don’t understand why anyone is attacking someone who’s just going about doing their job, who’s trying to keep Victorian roads and the people who use them safe,” Griffin said.

“It’s high-end criminal behaviour – we will not put up with it.”

Griffin said the car had been significantly damaged and was currently undergoing forensic testing to determine what weapon was used and look for clues that may lead authorities to the offender.

“We’re really confident that we’ll have some arrests shortly,” he said. “We hope that these people are absolutely held to account by the justice system.”

Griffin anticipated the offender would be charged with obstructing, hindering, abusing, or interfering with a mobile speed camera operator – an offence that carries a maximum penalty of $10,000 – but he said police would also consider charges of assault and property damage.

Mobile speed cameras are operated by private contractor Serco on behalf of the Department of Justice and Community Safety.

Anyone who witnessed the incident or with dashcam footage of the area is urged to contact Crime Stoppers on 1800 333 000 or submit a confidential report online at www.crimestoppersvic.com.au.

Our Breaking News Alert will notify you of significant breaking news when it happens. Get it here.