TWO high school football players were suspended from the team after carrying “Thin Blue Line” and “Thin Red Line” flags onto the field before a game without permission.

Brady Williams and Jarad Bentley said they carried the flags ahead of a Little Miami High School game in Ohio on September 11 to honor those who died in the terror attacks 19 years ago.

The teens asked the school for permission to carry the flags – meant to honor police officers, and firefighters killed in the line of duty – before the game, but were denied.

Brady and Jarad were then suspended from the team after carrying the flags onto the field after they were told no. 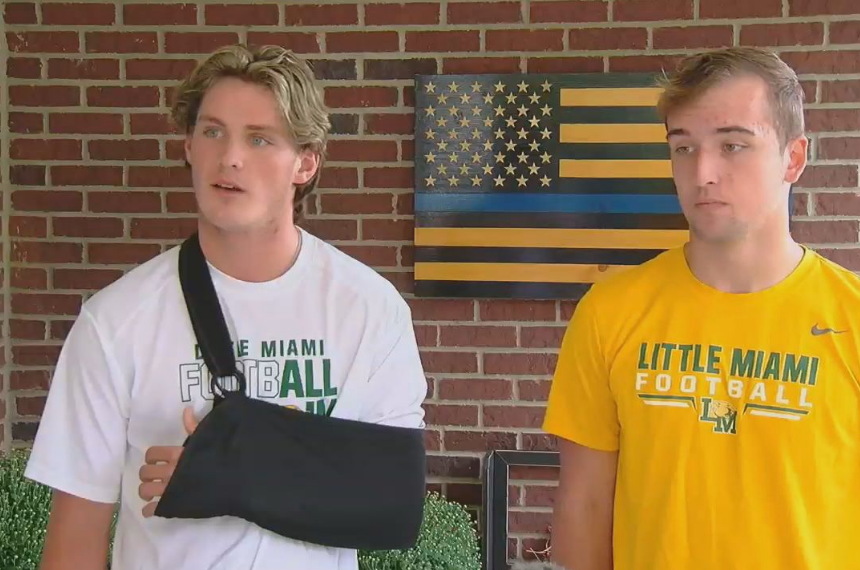 Bobbie Grice, the president of the Little Miami Board of Education, said that the only flag allowed on the field is an American flag, according to WXIX-TV.

In a statement, the school said: “Little Miami Local Schools is saddened to see this story take such a negative turn.

“While we understand these students' desire show their support of our first responders, they did not obtain permission from district officials.

"Administrators must act when students break the rules.

"The Patriot Night program to memorialize the victims of 9/11 was already part of our pre-game ceremonies on Friday and the American flag is the first thing through the tunnel every Friday night.

“Little Miami always has – and always will – support our first responders, our veterans, and all who sacrifice to maintain our freedoms.”

Grice later told WKRC the board’s investigation results “show that there were no political motivations behind this display of support for first responders on 9/11, but there were stances of insubordination."

The board president said the Patriot Night program at the game “featured a script recognizing first responders, information about what happened on 9/11, a poem celebrating those who sacrificed their lives and a remembrance ceremony with a moment of silence.

“We regret that such a moment of solemnity was somehow lost in this event."

As of Tuesday, the teens were no longer suspended from the high school football team.

According to local reports, the issue will now be handled as an Athletic Department Code of Conduct issue by the team’s coaching staff.

Many in the community were upset at the teens’ suspensions, and a Facebook event called We Stand with Brady and Jarad was created following their cut from the team.

“If they are not allowed to honor the country’s heroes, we will do it for them,” the page read, encouraging a gathering of flags at the team’s next home game on September 25.

“We will pull into the school in a large group before the game starts and proudly show our support.”

END_OF_DOCUMENT_TOKEN_TO_BE_REPLACED

END_OF_DOCUMENT_TOKEN_TO_BE_REPLACED
Recent Posts
We and our partners use cookies on this site to improve our service, perform analytics, personalize advertising, measure advertising performance, and remember website preferences.Ok