Washington: US regulators have approved the first ever medication for Alzheimer’s disease aimed at slowing cognitive decline, a controversial decision that delighted advocacy groups but defied the wishes of many top experts in the field.

The Food and Drug Administration (FDA) announced on Tuesday (AEST) that pharmaceutical company Biogen would be able to sell its aducanumab medication, which will appear under the brand name Aduhelm. 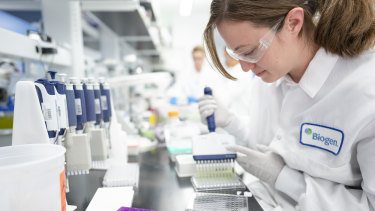 A scientist working on Alzheimer’s research at drugmaker Biogen’s headquarters in Cambridge, Massachusetts. Biogen is one of the companies behind the drug aducanumab.Credit:Biogen via AP

Aducanumab is the first approved medication that is intended to slow cognitive decline in people in the early stages of Alzheimer’s rather than simply target the symptoms of dementia.

The FDA has not approved an Alzheimer’s treatment since 2003, reflecting the high rate of failure for such medications.

In November the FDA’s own scientific advisory panel said the medication shouldn’t be approved because the evidence of its effectiveness was not persuasive enough.

Ten of the 11 panel members voted that it was not “reasonable” to consider Biogen’s clinical trial results as “primary evidence of effectiveness of aducanumab for the treatment of Alzheimer’s disease”.

But the FDA decided the medication met its standards for accelerated approval, which is used to fast-track promising new drugs to treat serious or life-threatening illnesses.

The World Health Organisation estimates that 50 million people worldwide have dementia. Around 470,000 Australians are living with the disease, according to Dementia Australia.

“Alzheimer’s disease is a devastating illness that can have a profound impact on the lives of people diagnosed with the disease as well as their loved ones,” Patrizia Cavazzoni, director of the FDA’s Centre for Drug Evaluation and Research, said in a statement.

“Currently available therapies only treat symptoms of the disease; this treatment option is the first therapy to target and affect the underlying disease process of Alzheimer’s.

“As we have learned from the fight against cancer, the accelerated approval pathway can bring therapies to patients faster while spurring more research and innovation.”

Biogen CEO Michel Vounatsos said in a statement: “This historic moment is the culmination of more than a decade of groundbreaking research in the complex field of Alzheimer’s disease.

“We believe this first-in-class medicine will transform the treatment of people living with Alzheimer’s disease and spark continuous innovation in the years to come.”

Biogen’s share price soared by over 40 per cent following the announcement.

Harry Johns, chief executive of the Alzheimer’s Association, said the FDA’s decision represented “a new day” for Alzheimer’s patients and their families.

“For families it means being able to hold on to their loved ones longer. It is about re-invigorating scientists and companies in the fight against this scourge of a disease. It is about hope.”

In March 2019 Aduhelm appeared destined to join a legion of other failed Azheimer’s treatments when Biogen halted two randomised clinical trials into the drug’s effectiveness after independent monitors found it was unlikely to benefit patients.

Later that year Biogen released a new analysis of one of the studies showing a small but statistically significant slowing in cognitive decline among trial participants who took the medication.

Under the rules of the FDA’s approval, the company will have to conduct a new randomised clinical trial to verify the drug’s effectiveness while it is on sale in the US.

If the trial fails to verify a clinical benefit, the FDA may decide to withdraw its approval for the drug.