Recent arrests appear to follow a pattern of attacks on press freedom since Modi’s ascension to power, journalists say. 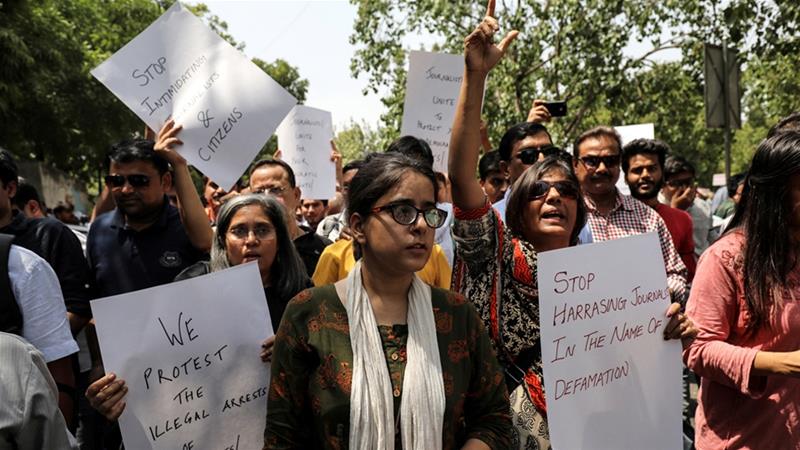 New Delhi, India – On the afternoon of June 8, two plain-clothes policemen arrived at the house of Prashant Kanojia, an independent journalist in Delhi.

Without giving a specific reason, they asked Kanojia to accompany them. Soon after, Jagisha Arora, Kanojia’s wife, frantically tried to reach his mobile.

“I kept trying him repeatedly,” said Arora, “but his phone had been switched off”.

Ten hours later, Arora received a call from the police in Uttar Pradesh, India‘s largest state bordering Delhi. Her husband had been flown to Lucknow, the state capital almost a thousand kilometres away.

The police informed Arora that her husband had been arrested for a provocative tweet about Yogi Adityanath, the firebrand far-right chief minister of the state.

Kanojia had shared a video on Twitter, showing a woman speaking to various media organisations, claiming she had sent Adityanath a proposal for marriage. The Uttar Pradesh police charged Kanojia with criminal defamation and attempts to malign the chief minister’s image.

After Kanojia’s arrest, Arora immediately contacted his former colleagues at The Wire, an online media organisation where Kanojia had worked until recently. Soon, word went around the country’s media fraternity who began to rally around Kanojia in solidarity.

Legal help was marshalled for his defence. “The lawyers advised me to approach the Supreme Court,” Arora said.

Kanojia had been arrested on a Saturday, which was most likely not a coincidence, said Arora. This meant he could be held in detention until Monday when the courts would reopen. “All their moves seemed like it was part of an intricate plan,” she said.

On Monday, Arora filed a petition in the Supreme Court. A day later, on Tuesday, India’s top court ordered Kanojia’s immediate release. “The question is whether (Kanojia) ought to be deprived of his liberty,” the court said. “The answer to that is prima facie in the negative.”

Kanojia was not alone. On the same day he was picked up, Ishika Singh and Anuj Shukla, who worked at Nation Live, a private news channel, were arrested on the same charges as Kanojia.

Two days later, on June 10, Anshul Kaushik, another journalist at Nation Live, was arrested on charges of defaming Adityanath.

The arrests appear to follow a pattern of escalating attacks on press freedom since Prime Minister Narendra Modi’s ascension to power in 2014.

India continues to slide down the World Press Freedom Index. In the annual rankings released by Reporters Without Borders in April 2019, India was ranked 140th out of 180 countries, two places down from the previous year.

Spokespersons for the ruling Bharatiya Janata Party (BJP) and top officials of the Uttar Pradesh government declined to comment on the latest arrests, instead pointing to the police report and saying that the matter was now in the courts.

While the state of press freedom appears to have worsened under Modi, the clampdown on the media seemingly goes beyond the BJP.

On May 19, the security personnel of Tej Pratap Yadav, an opposition leader in the state of Bihar, beat photojournalists at a polling booth after a minor argument.

On June 15, Dilip Sharma, a journalist running a local news website in the central Indian state of Chhattisgarh, was arrested for what the government considered a “false” news report on erratic power supply in the state. Chhattisgarh is ruled by the Indian National Congress, India’s main opposition party.

On June 9, a day after the arrests of the three journalists, the Editors Guild of India, India’s premier body for protecting press freedom, termed the act “an effort to intimidate the press, and stifle press freedom”.

“The police action is high-handed, arbitrary and amounts to an authoritarian misuse of laws,” a statement issued by the Guild said.

However, the Editors Guild of India has faced criticism for its what some journalists saw as their lethargic response to the arrests and its lack of energetic advocacy for the cause it seeks to represent.

“At this particular moment, when the press is facing an unprecedented subversion by the government, the Editors Guild should be a proactive body speaking for journalistic independence,” said Hartosh Singh Bal, political editor of The Caravan, a magazine in New Delhi, and an outspoken commentator on media issues.

According to Bal, the office bearers of the Editors Guild “should be directly in touch with politicians and police officials to aid journalists in such instances”.

When contacted by Al Jazeera, none of the three office bearers of the Editors Guild of India would comment.

Ashok Bhattacharya, the organisation’s general secretary, and Sheela Bhatt, the treasurer, declined to comment, while Shekhar Gupta, the president of the Editors Guild, did not respond to texts asking for comment.

Gupta, usually a prominent presence on television debates and social media, has been subdued on the issue.

“If the Editors Guild is just for carrying around a label, then don’t waste anyone’s time,” said Bal. “In that case, it should be disbanded rather than pretending to speak for journalists.”

On June 13, Kanojia finally returned to his home in Delhi, five days after he had been picked up by the Uttar Pradesh police, both he and his wife were still feeling the aftershocks of a traumatising week.

“Right now, we are trying to relax,” said Arora. “But we will keep on fighting.” 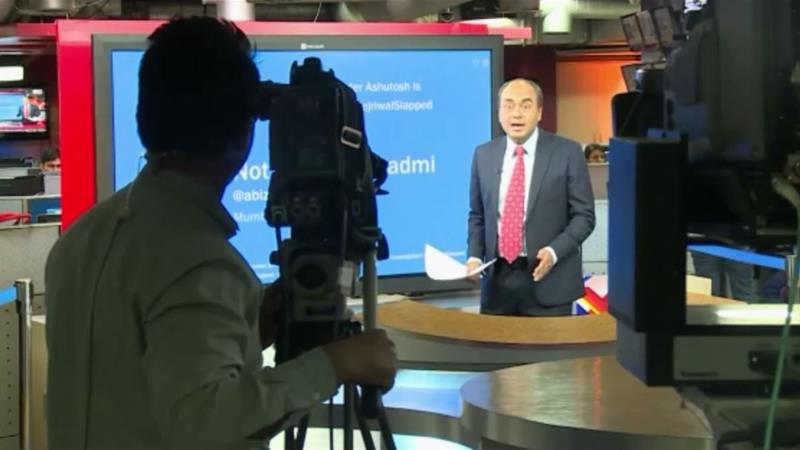