All international commercial flights to Pakistan are suspended with some airlines forced to reroute transit flights. 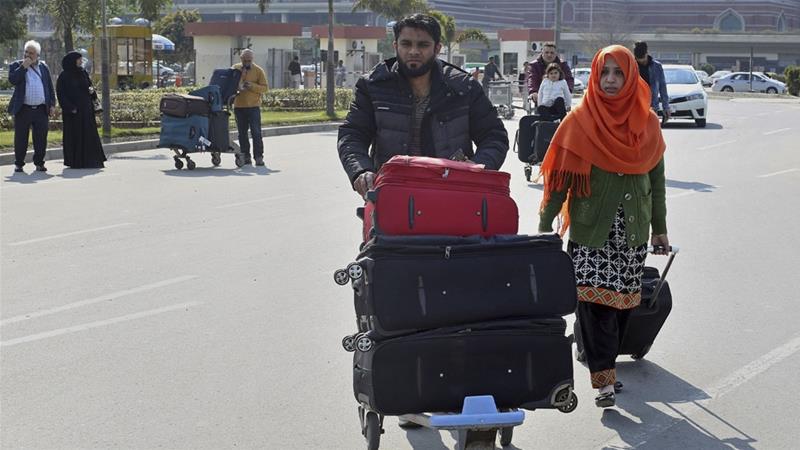 Several international airlines have suspended flights to Pakistan after the South Asian nation closed its airspace in light of heightened tensions with neighbouring India.

Airlines flying over India and Pakistan to Europe, the Middle East, and Asia were disrupted and some flights were routed through Mumbai on India’s western coast, so they could head further south and avoid Pakistan airspace, an Indian government official told the Reuters news agency.

Qatar Airways said in a statement it has temporarily suspended flights to eight cities in India and Pakistan “due to the ongoing situation on the India-Pakistan border” and that its flights routed over the India-Pakistan airspace may be delayed due to rerouting in the area.

Bahrain’s Gulf Air said it had suspended all flights to and from Pakistan due to the closure of the airspace while low-cost carrier flydubai said it is reviewing its schedule.

Emirates and Etihad also said they had suspended some flights to Pakistan.

All flights from Kabul to India have been cancelled until further notice while India’s state-run carrier Air India has cancelled its flights until the first week of March, an airline official in Kabul said.

Air Canada said it has temporarily suspended service to India because of Pakistan’s airspace closure.

Singapore Airlines’ Europe-bound flights would need to make refuelling stops, the airline said in a statement. British Airways said it is monitoring the situation closely.

“You can’t overfly China, so you have to overfly Pakistan and India and go to Southeast Asia and Australia. Most of the traffic destined for Bangkok and Singapore will have to fly over Iran and then possibly take a detour,” he said.

India, earlier on Wednesday, shut several airports in the northern part of the country temporarily, leading to dozens of domestic flight cancellations. Operations at the Indian airports have now resumed.

Indian airlines including IndiGo, India’s biggest airline by market share, low-cost rival GoAir and full-service carriers Jet Airways and Vistara, a joint venture between Singapore Airlines and Tata Sons, were forced to cancel services to at least six cities in northern India due to airport closures.

The airlines said on Twitter that flights to cities including Amritsar, Chandigarh, Dehradun, Jammu, Leh and Srinagar have been put on hold or temporarily suspended.

Airports in the cities of Amritsar, Pathankot, Jammu, Leh and Chandigarh were temporarily closed for commercial flights earlier on Wednesday, sources told Reuters.

Pakistan carried out air raids and shot down two Indian military jets on Wednesday, Pakistani officials said, a day after Indian warplanes struck inside Pakistan for the first time since a war in 1971, prompting leading powers to urge both of the nuclear-armed countries to show restraint.

Tension has been elevated since a suicide car bombing by Pakistan-based rebels in Indian-controlled Kashmir killed at least 40 Indian paramilitary police on February 14.

But the risk of conflict rose dramatically on Tuesday when India launched an air raid on what it said was a rebel training base.

END_OF_DOCUMENT_TOKEN_TO_BE_REPLACED

END_OF_DOCUMENT_TOKEN_TO_BE_REPLACED
Recent Posts
We and our partners use cookies on this site to improve our service, perform analytics, personalize advertising, measure advertising performance, and remember website preferences.Ok