Home » Inside a ‘world-class experiment’ in vaccine passports

Inside a ‘world-class experiment’ in vaccine passports

Jerusalem: Last Thursday, as Tel Aviv nightclub Haoman 17 prepared to re-open after closing for a year during the pandemic, management had a niggling concern.

How would Israeli partygoers respond to the new entry requirement that they carry their country’s COVID passport – known locally as the Green Pass?

As doors were due to open at 11pm, office manager Emma Tokatly checked the CCTV cameras in the club that helped make the coastal city a world famous party destination. Outside she said she saw something the club had never witnessed in its 16 years of operation: a perfect, orderly queue. 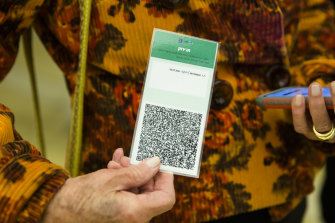 “The crowd always just wants to get in but after this year, they were all very polite, they waited,” said Tokatly. “Clubbers don’t always have a lot of stuff on them, just their money in their pockets, but this time everyone came organised with their ID and with the application and everything.”

Rolled out incrementally since March 7, Israel’s Green Pass allows holders to show either a phone application or a certificate issued by the Ministry of Health showing that they have been vaccinated, recovered from the virus, or obtained a negative PCR test result within 48 hours of attending an event. 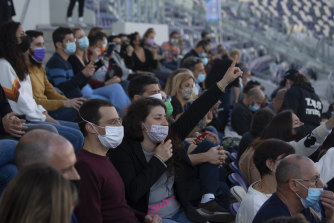 Concert-goers in Tel Aviv enjoy a performance at a soccer stadium after presenting proof of vaccination via their “green passport” – available on an app or as a printed tag.Credit:AP

It has allowed Israelis to return to gyms, hotels, indoor dining at restaurants, theatres, concerts and most recently nightclubs too. It is not needed to enter shops or shopping malls. Events using the Green Pass will be allowed to host thousands of guests for Independence Day celebrations next week.

Israel’s experience rolling out the scheme could prove illustrative as the UK government considers COVID passports as a way to reopen the economy, despite opposition over privacy, civil liberties and data protection concerns.

Israel has hailed its Green Pass as a “world-class” experiment. “No one else has tried it,” said Ran Balicer, the chairman of the National Expert Advisory Panel to the Government on COVID-19, in comments carried in the Jerusalem Post.

Other countries including Bahrain, China, and Denmark have introduced similar schemes.

Bahrain launched its scheme in February, one of the first countries to do so. Its BeAware app displays the bearer’s personal information, including which vaccine was received. 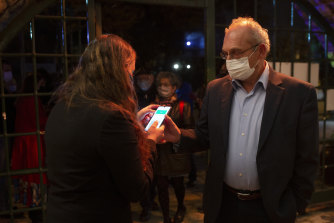 A man presents his Green Pass as proof of coronavirus vaccination, at the Khan Theatre in Jerusalem.Credit:AP

China launched its COVID passport scheme on March 8. It is hosted on the app WeChat and can also be used in paper form. An encrypted QR code allows authorities to see an individual’s medical history. The app gives users a red, yellow or green rating to indicate their likelihood of having the virus.

Denmark launched its coronavirus passport scheme on Tuesday, one of the first European countries to do so, allowing non-essential businesses to reopen to customers. Customers will need to show their “coronapas” at certain businesses like hairdressers, and for when service at restaurants resumes.

Israelis have generally acknowledged that their Green Pass has worked well, though there have been some issues in implementation. Last month, police arrested a man accused of forging Green Passes and vaccination certificates and offering them for sale in a Telegram group with tens of thousands of members.

Israeli police lack the manpower to check every venue adopting the Green Pass system, so enforcement necessarily relies on businesses checking their customers’ identification and passes. “Just as the police does not stand and check who has a ticket to get into a cinema, or who can get into a gym – who is above 16, and who is not – you have the proprietors of the establishments, and municipal and government supervisors” to do that, Public Security Minister Amir Ohana said last month. Opposition to the Green Pass has been largely limited to a small fringe of coronavirus denialists and anti-vaxxers, according to Nadav Eyal, a columnist for Yedioth Ahronoth newspaper.

He credited the system with allowing Israelis returning to some semblance of normal life without coronavirus cases surging. “People are going to shows, they’re seeing music, they’re going to lectures, coffee shops – it’s been more than a month now and you’re not seeing an outbreak,” he said.

At the peak of Israel’s outbreak in January, authorities recorded over 10,000 new cases in a single day. Today the country is averaging about 300 new cases daily and closing dedicated coronavirus wards.

“We’re over this phase of asking whether this is something we want to do here,” Eyal said. “Right now we’re in a different position of asking how do you make sure that compliance remains high when at any rate most of the population is vaccinated?”

While over half of Israel’s population of over nine million has been fully vaccinated, the vaccine is not yet available to children under 16. And an estimated one million Israeli adults have not taken the opportunity to get vaccinated, meaning that other preventative measures to contain outbreaks are still necessary.

But any would-be British tourists hoping to escape lockdown restrictions in a post-COVID paradise will have to wait. For now Israel is still closed to most foreigners and the Green Pass is only available to its citizens.