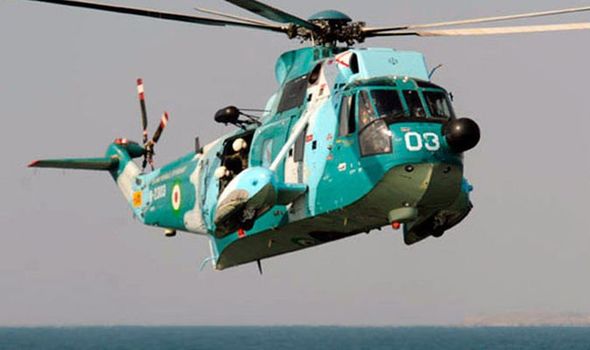 Tensions between Tehran and Washington have reached boiling point over recent months. Now, it is believed an Iranian helicopter approached a US warship travelling through the Gulf of Oman in an extremely dangerous stunt.

According to Disclose.tv, the helicopter came as close as 25 yards to the US warship on November 12.

Pentagon spokesperson John Kirby said: “We can confirm that an Iranian helicopter approached the USS Essex in the Gulf of Oman and operated in an unsafe and unprofessional manner, flying approximately 25 yards off the port side of the Essex.”

A video posted on Twitter by user, InteliGirl, shows the helicopter flying along the top of the sea.

She tweeted: “Very Dangerous Low Level flight by Iranian Sea King Helicopter just Metres away from US Navy #LHD_2 #ESSEX Thus Humiliating her when passing by Strait of Hormuz. #IRAN.”

Earlier this month, Iran’s claims of thwarting a US attempt to capture an Iranian oil tanker in the Sea of Oman was branded “untrue” by the Pentagon.

According to Iranian media, the US Navy attempted to capture a tanker carrying the Islamic Republic’s oil in the Sea of Oman.

The elite Guards said in a statement published by Press TV, Iranian state media: “With the timely and authoritative action of the Guards naval forces, the US terrorist Navy’s operation to steal Iranian oil in the Sea of Oman failed.

“The tanker carrying Iran’s oil docked at the port of Bandar Abbas on October 25.”

The statement continued: “Members of the Guards naval forces carried out a heliborne operation on the detained tanker’s deck, gained control of the vessel, and directed it back toward Iran’s territorial waters.”

However, US officials lashed out at the report, claiming it is not true and Washington had not attempted to capture the tanker.

According to Sky News Arabia, a Pentagon official said: “The Revolutionary Guards’ allegations regarding the Iranian oil tanker are ‘false’ and are just ‘propaganda’ that do not deserve a response.”

Officials went on to say how Iranian forces had seized a Vietnamese-flagged oil tanker last month and the US Navy was monitoring the situation.

Under the Trump administration, the US imposed crippling sanctions on Iran after withdrawing from the Iranian nuclear agreement, formally known as the Joint Comprehensive Plan of Action (JCPOA), in 2018.

Washington sought an extension of a United Nations (UN) arms embargo against Tehran.

Analysts feared Washington and Tehran were on the brink of war in January 2020 after US forces killed Iranian General Qassem Soleimani in a missile strike in Iraq.

General Soleimani’s convoy was struck by three US missiles.

Days after the attack, Tehran retaliated and launched a series of ballistic missiles at two Iraqi bases housing US troops.