Israel goes into a second full lockdown: Businesses close and movement is limited over Jewish High Holidays for three-week shutdown

Israel has gone back into full lockdown to try to contain a coronavirus outbreak that has steadily worsened for months as the country’s government has been plagued by indecision and infighting.

The three-week lockdown, which began at 2 pm local time (1100 GMT), will require the closure of many businesses and sets strict limits on movement and public gatherings.

The closures coincide with the Jewish High Holidays – which include the Rosh Hashanah and Yom Kippur holidays – when people typically visit their families and gather for large prayer services. 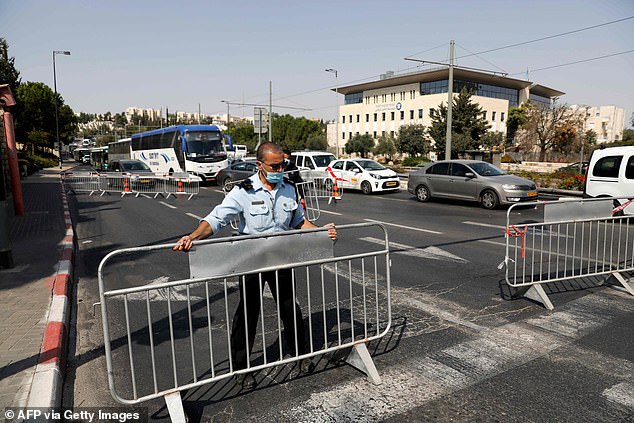 Israel is the first developed country to return to a full lockdown amid the ongoing coronavirus pandemic. The new rules came into force on Friday, just before the Jewish High Holidays, which begin at sundown 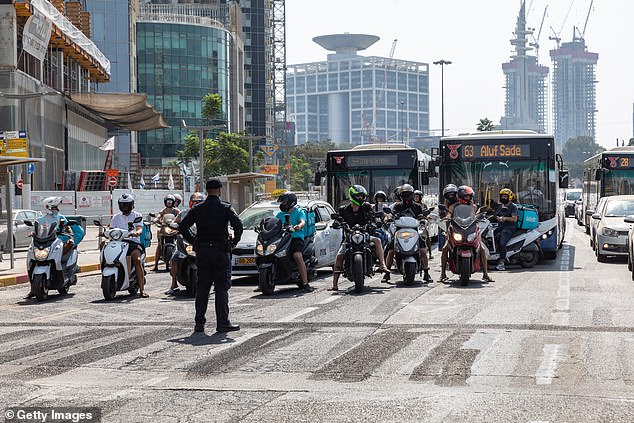 Under the new lockdown rules, people must remain within 0.6 miles of their homes unless they are shopping for food or medicine or working in a location that is closed to the public 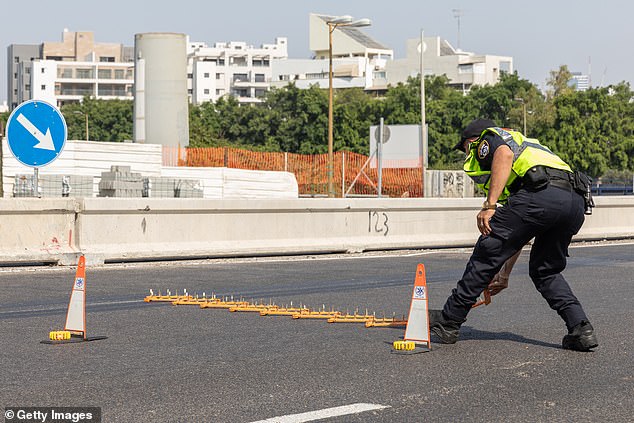 The Israeli military has been called in to help police officers, like the one above, and other security forces implement the new lockdown restrictions across the country 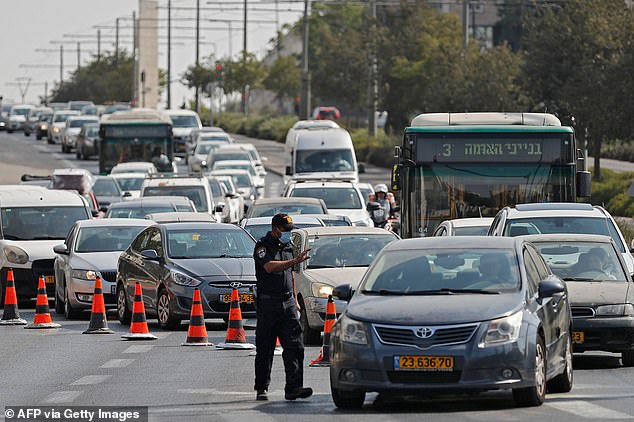 Israel has reported a total of more than 175,000 cases since the outbreak began, including at least 1,169 deaths. It is now reporting around 5,000 new cases a day, one of the highest per capita infection rates in the world

In an address late on Thursday, Prime Minister Benjamin Netanyahu warned that even stricter measures may be needed to prevent hospitals from being overwhelmed.

Israel currently has more than 46,000 active cases, with at least 577 of those individuals hospitalised in a serious condition.

‘It could be that we will have no choice but to make the directives more stringent,’ Netanyahu said.

‘I will not impose a lockdown on the citizens of Israel for no reason, and I will not hesitate to add further restrictions if it is necessary.’

Under the new lockdown rules, nearly all businesses open to the public will be closed.

People must remain within 1 kilometre (0.6 miles) of home, but there are several exceptions, including shopping for food or medicine, going to work in a business that’s closed to the public, attending protests and even seeking essential pet care.

Israel has reported a total of more than 175,000 cases since the outbreak began, including at least 1,169 deaths. It is now reporting around 5,000 new cases a day, one of the highest per capita infection rates in the world. 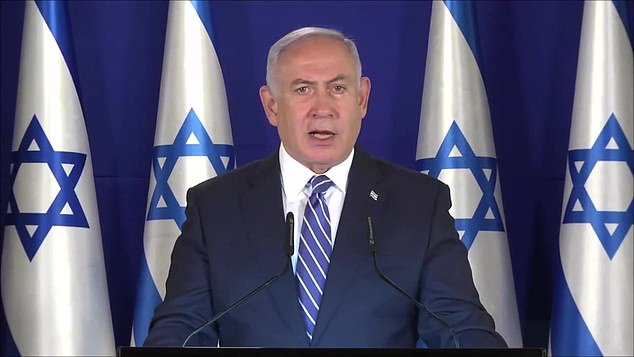 Speaking on Thursday night before the new lockdown was announced, Prime Minister Benjamin Netanyahu warned that such a measure might be necessary to prevent hospitals from becoming overwhelmed. 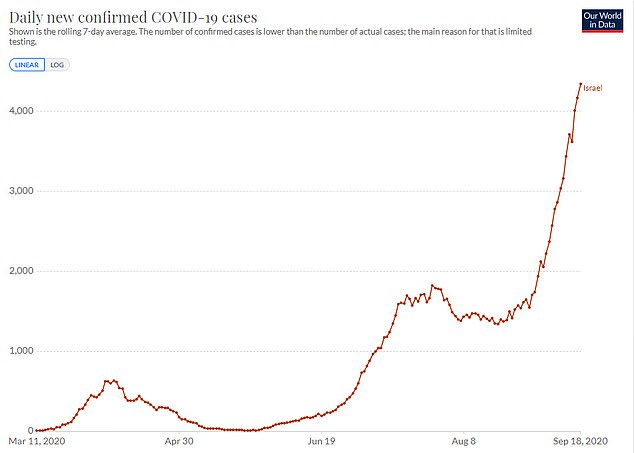 Coronavirus case numbers in Israel have been steadily rising for months. The country currently has more than 46,0000 active cases. At least 577 of these cases are hospitalised in a serious condition 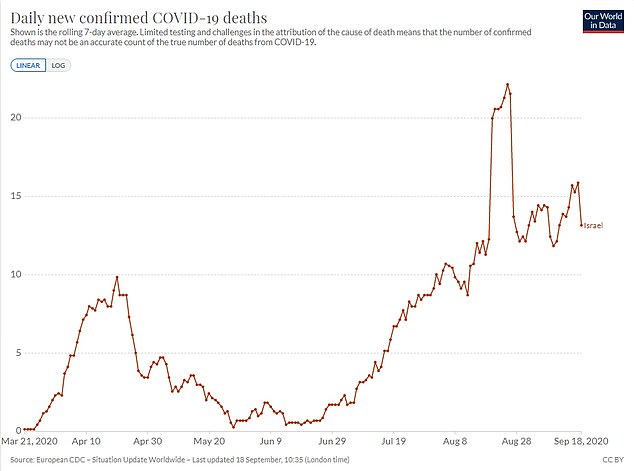 Israel began easing its first lockdown in early May. Aside from a large spike in August, deaths from the virus have risen steadily since mid-June

Israel was among the first countries to impose sweeping lockdowns this spring, sealing its borders, forcing most businesses to close and largely confining people to their homes. That succeeded in bringing the number of new cases down to only a few dozen per day in May.

But then the economy abruptly reopened, and a new government was sworn in that has been paralysed by infighting.

In recent months authorities have announced various restrictions only to see them ignored or reversed even as new cases soared to record levels. 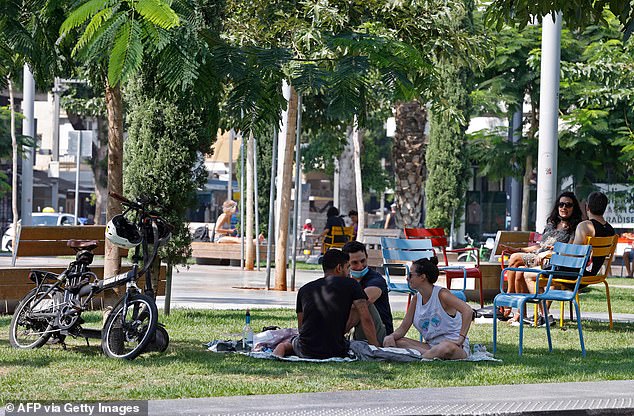 People were still out and about in the Israeli capital Tel Aviv on Friday, prior to the lockdown being announced at 2pm local tim 1100GMT. The country has seen its number of cases steadily worsen over the last few months 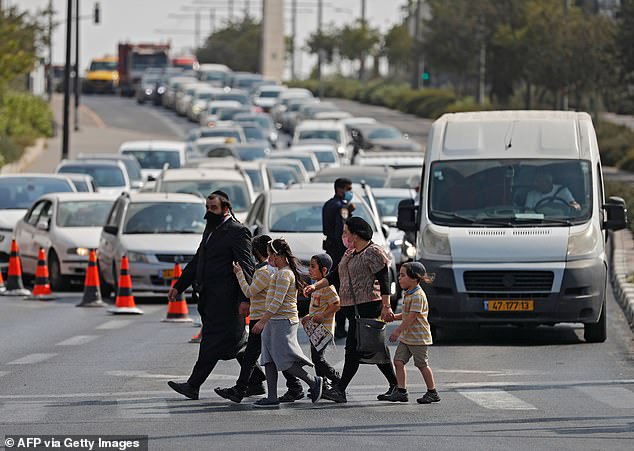 Traffic is stopped and people hurry home in Jerusalem as the lockdown measures are announced. Israel’s hospitals have been greatly strained by the coronavirus pandemic, which has also put pressure on health systems in the occupied West Bank and Gaza 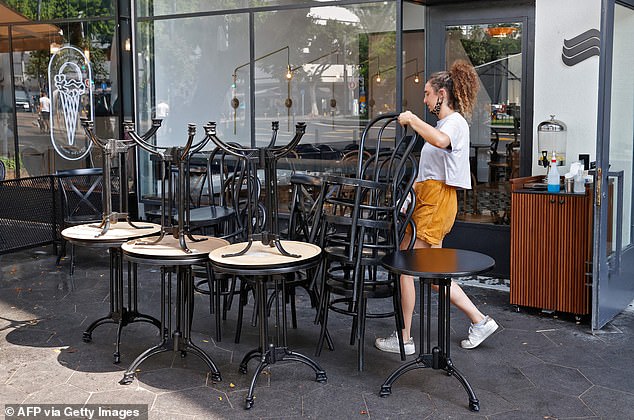 Many businesses, already struggling from the first lockdown, have been forced to close their doors again. The prior lockdown caused an economic crisis that Israel has yet to recover from, with many people losing their jobs

The occupied West Bank has followed a similar trajectory, with a spring lockdown largely containing its outbreak followed by a rise of cases that forced the Palestinian Authority to impose a 10-day lockdown in July.

The Gaza Strip – which has been under an Israeli-Egyptian blockade since the militant group Hamas seized power from rival Palestinian forces in 2007 – was initially insulated from the pandemic.

But authorities detected community spread last month and there are now more than 1,700 active cases in the impoverished territory of 2 million, straining its already fragile health system. At least 16 people have died. 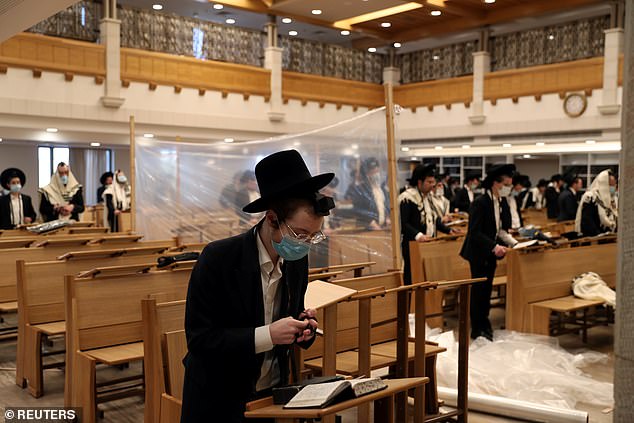 The insular ultra-Orthodox community – among which infection rates have been high – is concerned about how the lockdown will affect religious practices, particularly during the Jewish High Holiday when family gatherings and religious meetings are more frequent 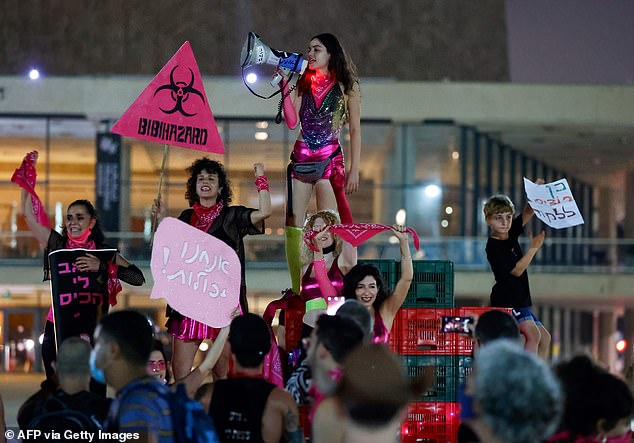 Netanyahu’s government has faced long-running protests and withering criticism over its handling of the pandemic. Hundreds of people  gathered in Tel Aviv on Thursday night to oppose the new lockdown, including doctors and scientists who said it would be ineffective

In Israel, the government has come under withering criticism for its response to the virus and the economic crisis triggered by the earlier lockdown.

Netanyahu, who is also on trial for corruption, has been the target of weekly protests outside his official residence.

Israel’s insular ultra-Orthodox community, which has a high rate of infection, has also been up in arms about the restrictions, especially those targeting religious gatherings.

In the Israeli Tel Aviv, hundreds of people protested the renewed lockdown on Thursday, including doctors and scientists who said it would be ineffective.

Dr. Amir Shahar, head of an emergency department in the city of Netanya and one of the organisers of the demonstration, said the lockdown is ‘disastrous’ and would do ‘more harm than good.’

END_OF_DOCUMENT_TOKEN_TO_BE_REPLACED

END_OF_DOCUMENT_TOKEN_TO_BE_REPLACED
Recent Posts
We and our partners use cookies on this site to improve our service, perform analytics, personalize advertising, measure advertising performance, and remember website preferences.Ok