Facing a hotter future, dwindling water sources and an exploding population, scientists in one Middle East country are making it rain. Literally.

United Arab Emirates meteorological officials released a video this week of cars driving through a downpour in Ras al Khaimah in the northern part of the country. The storm was the result of one of the UAE’s newest efforts to increase rainfall in a desert nation that gets about 10 centimetres a year on average. 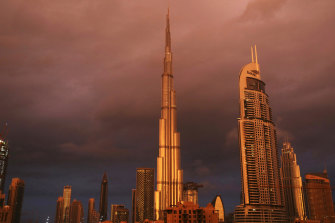 Sunlight reflects off the Burj Khalifa, the world’s tallest building, during a rain shower in Dubai in 2018.Credit:AP

Scientists created rainstorms by launching drones, which then zapped clouds with electricity, the Independent reports. Jolting droplets in the clouds can cause them to clump together, researchers found. The larger raindrops that result then fall to the ground, instead of evaporating midair – which is often the fate of smaller droplets in the UAE, where temperatures are hot and the clouds are high.

“What we are trying to do is to make the droplets inside the clouds big enough so that when they fall out of the cloud, they survive down to the surface,” meteorologist and researcher Keri Nicoll told CNN in May as her team prepared to start testing the drones near Dubai.

Nicoll is part of a team of scientists with the University of Reading in England whose research led to this week’s man-made rainstorms. In 2017, the university’s scientists received $US1.5 million ($2.04 million) for use over three years from the UAE Research Program for Rain Enhancement Science, which has invested in at least nine different research projects over the past five years.

To test their research, Nicoll and her team built four drones with wingspans of about two metres. The drones, which are launched from a catapult, can fly for about 40 minutes, CNN reported. During flight, the drone’s sensors measure temperature, humidity and electrical charge within a cloud, which lets the researchers know when and where they need to zap.

Water is a big issue in the UAE. The country uses about 4 billion cubic meters of it each year but has access to about 4 per cent of that in renewable water resources, according to the CIA. The number of people living in the UAE has skyrocketed in recent years, doubling to 8.3 million between 2005 and 2010, which helps explain why demand for water spiked by a third around that time, according to the government’s 2015 State of Environment report. The population kept surging over the next decade and is now 9.9 million.

“The water table is sinking drastically in [the] UAE,” University of Reading professor and meteorologist Maarten Ambaum told BBC News, “and the purpose of this [project] is to try to help with rainfall.”

It usually rains just a few days out of the year in the UAE. During the summer, there’s almost no rainfall. Temperatures there recently topped 51 degrees.

In recent years, the UAE’s massive push into desalination technology – which transforms seawater into freshwater by removing the salt – has helped close the gap between the demand for water and supply. Most of the UAE’s drinkable water, and 42 per cent of all water used in the country, comes from its roughly 70 desalination plants.

Still, part of the government’s “water security strategy” is to lower demand by 21 per cent in the next 15 years.

Ideas to get more water for the UAE have not lacked imagination. In 2016, The Washington Post reported government officials were considering building a mountain to create rainfall. As moist air reaches a mountain, it is forced upward, cooling as it rises. The air can then condense and turn into liquid, which falls as rain.

Estimates for another mountain-building project in the Netherlands came in as high as $US230 billion.

Other ideas for getting more water to the UAE have included building a pipeline from Pakistan and floating icebergs down from the Arctic.