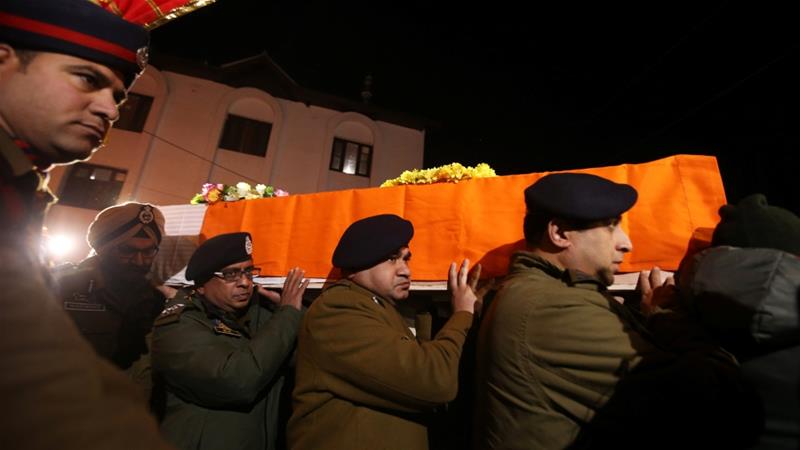 Dilbagh Singh, the state police chief, told Al Jazeera that the violence came after Indian security forces launched an operation against the rebels in Kulgam’s Turigam village on Sunday afternoon.

“In the operation, we lost a police officer, Aman Thakur and one army soldier, who was injured and succumbed to his injuries. The gunfight is almost over,” he said.

“Two of them are foreigners, according to our preliminary information, and the identity of the third is not known yet,” he said.

As the news of the gun battle spread in Kulgam, large numbers of residents marched towards the site, triggering clashes in which at least eight civilians were wounded, health officials said.

The residents say they are “tired of [the violence]” mostly taking place in the villages of south Kashmir.

“We are mentally very disturbed by these killings. The noise of gunfire always rings in our ears,” Fayaz Ahmad, 45, a resident of Kulgam told Al Jazeera.

Tensions have been heightened between India and Pakistan since a suicide attack on a highway in south Kashmir’s Pulwama on February 14 killed 42 Indian paramilitary troops.

After JeM claimed responsibility for the attack, India warned Pakistan of a “jaw-breaking response”.

Since then, the two countries have engaged a war of words. The Pakistani army warned India that they would “respond with full force if attacked”.

The suicide attack in Pulwama is believed to have been carried out by 20-year-old Adil Dar, a local rebel from south Kashmir. It was the biggest attack on Indian forces in the history of disputed Kashmir.

Indian authorities have launched a major crackdown on separatist leaders in the region and arrested at least 150 of them in the past two days.

On Sunday, there was a complete shutdown in Kashmir over the mass arrests.

Last year was the deadliest in a decade with more than 500 killings, according to human rights groups. There has been no dip in such incidents this year either.

On February 18, five Indian armed personnel and three rebels were killed in a gun battle in Pulwama. In the last two months, 37 rebels and 50 Indian security personnel have been killed in the violence.

Amid the growing tension, Indian authorities on Saturday rushed about 10,000 additional paramilitary soldiers to Kashmir Valley, already classified as the world’s most militarised region.

The latest tensions have raised fears of possible military escalation between the long-time rivals.

Kashmir, a Muslim-majority region, is split between Pakistani and Indian zones of control, but both countries claim it in its entirety and have fought two of their three wars over it.

END_OF_DOCUMENT_TOKEN_TO_BE_REPLACED

END_OF_DOCUMENT_TOKEN_TO_BE_REPLACED
Recent Posts
We and our partners use cookies on this site to improve our service, perform analytics, personalize advertising, measure advertising performance, and remember website preferences.Ok