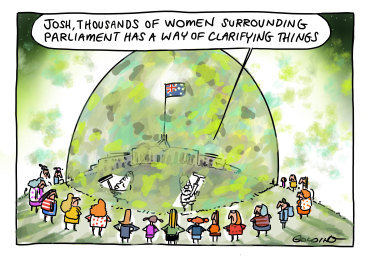 I wonder if those who appointed Mathias Cormann the next secretary-general of the Paris-based Organisation for Economic Development and Co-Operation checked whether he had his fingers crossed behind his back when he pledged to promote ambitious action on climate change.
Erica Grebler, Caulfield North

The European Union is serious about carbon levies on countries with weak emissions laws (The Age, 11/3). Why should their industries do the “heavy lifting” in reducing emissions while big polluters (like Australia) sell their goods with impunity? Unlike Australia’s government, the EU recognises the gravity of the world’s position and is constantly expanding its climate action goals. In the meantime, Scott Morrison will blame the resultant loss of profits for Australian exporters on the EU, not his recalcitrant government.
Fiona Colin, Malvern East

If the United Kingdom, Israel and United States can vaccinate so many of their people, why can’t Australia do the same? Following our snail’s pace in the planning for the past year, I am flabbergasted and heartbroken that I am kept from visiting my family in Europe for yet another year.
Uschi Felix, South Melbourne

The security to spend

If the government re-directed the funds that are being given to travel and business towards the vaccine rollout, vaccinated people would have the confidence to go out and spend –anywhere in Australia.
Geoff Hall, Mentone

How did this happen?

A doctor at Brisbane’s Princess Alexandra Hospital has tested positive for coronavirus. If a doctor treating COVID-19 patients is not an absolute priority for the vaccine, then who is? Is this another system failure?
Geoff Oliver, East Malvern

Surely men could change their names for the same reasons. It is high time for a “surname coin toss” to be added to the list of wedding traditions. This could take place just before the vows and would give each party’s surname an equal chance of winning. It would be an exciting addition to the ceremony.
Alison Cook, Blackburn North

Proud to take her name

I was disappointed that Kerrie O’Brien did not offer instances of a male changing his name to his wife’s name. It happens. My daughter wanted to keep her name as she is a specialist doctor. Her husband happily changed his surname.
Alan Inchley, Frankston

Parnell Palme McGuinness – “Replacing care with cash?” (Sunday Age, 7/4) – resources make a difference to the quality of aged care. Australia spends less than half the proportion of funds provided for aged care as the Netherlands.

Resources determine nurse and aged care worker training, ratios and wages. That affects the quality of care, and amount of personal attention, people receive. It provides more time for showering and dressing, and that in itself helps preserve dignity. It determines the presence of dentists and GPs, quality of food and quality of surrounds (eg, privacy, gardens).The Age needs to campaign on this issue up to the next election.
Tristan Ewins, Box Hill North

I so agree with Jane Caro when she asks, “When will a woman simply be a fellow human being who happens to be female?” (Sunday Life 7/3). Women are wonderful and I am all in favour of celebrating all the women I know and love. However, we will achieve equality when we recognise and respect each other as fellow humans
Libby Gillingham, Mornington

I define who I am

For decades I have made a stand against being categorised by my marital status. Am I single, never married or divorced? I was single. I was married. I was divorced. I am again single. This is a clear example of my relationship to a man defining who I am. Not acceptable.
Katharine Anderson, Windsor

Ever the marketing man

Over the last week I have watched our Prime Minister on the nightly news pretending to fly an aeroplane, make pasta and change a wheel on a car. Surely it is time to end these daily photo opportunities and concentrate on governing the country. He seems to be more engrossed in promoting his personal image and government spin than he is with managing the economy, ensuring the COVID-19 vaccination occurs in a timely manner and restoring faith in some of his besmirched ministers.
Hugh Halliburton, Carnegie

What separates great faith leaders? Judging from your photo of Pope Francis and Grand Ayatollah Ali al-Sistani (Sunday Age, 7/3), it is a box of tissues.
John Gordon-Kirkby, Mornington

It is time the Queen got the better of her “courtiers” and sacked them. Their overblown egos and self-importance have wreaked havoc, starting with their treatment of Princess Diana and now with the Duchess of Sussex. Both were a credit to the royal family.
Jonne Herbert, Kew East

Note from the Editor

The Age’s editor, Gay Alcorn, writes an exclusive newsletter for subscribers on the week’s most important stories and issues. Sign up here to receive it every Friday.