Can anyone stop Penny’s surge to No10? Liz Truss tries to regain upper hand with campaign launch as allies lash ‘untested’ Mordaunt ahead of second round of voting TODAY – as nervous frontrunner Sunak is backed by Hunt and vows ‘responsible’ tax cuts

The race for No10 hits another critical phase today with Liz Truss desperately trying to quell a Penny Mordaunt surge.

As nervous frontrunner Rishi Sunak vows to bring down taxes ‘responsibly’, the momentum appears to be with the trade minister after she came a shock second in the initial round of voting by MPs.

Ms Mordaunt picked up support from 67 compared to the former Chancellor’s 88, putting her in a strong position to make the final run-off ballot of Tory members. She has been installed as the bookies’ favourite after bombshell polling suggested that she would win a head-to-head against any of her rivals.

Ms Truss, who recorded 50 votes, is making a huge push to restore her fortunes with her official campaign launch this morning, pleading for the Conservative right to unite behind her.

Her allies also fired salvos at Ms Mordaunt this morning, with Treasury minister Simon Clarke swiping that the country ‘needs a leader who is tested and ready’ and Lord Frost saying he had ‘grave reservations’.

One campaign source told MailOnline: ‘Just because Penny voted for Brexit doesn’t mean she can be trusted to deliver it. Her delivery record post-Brexit is incredibly underwhelming – can she be trusted to get things done?’

Ms Truss’s team hope that Suella Braverman and Kemi Badenoch will be knocked out in rounds of voting today and early next week, and their backers will dramatically boost her numbers.

At her launch she will pledge to be the ‘change candidate’ on the economy, including an emphasis on tax cuts and spending control.

She will argue that her experience as chief secretary to the Treasury makes her the only candidate with the credibility to take on Mr Sunak on the economy.

Mr Sunak will hope to boost his tally over 100 in the latest ballot today, after being endorsed by the eliminated Jeremy Hunt, and virtually guarantee his place in the final two.

In an interview on BBC Radio 4’s Today programme, Mr Sunak insisted he was the best option to defeat Labour at the next election. 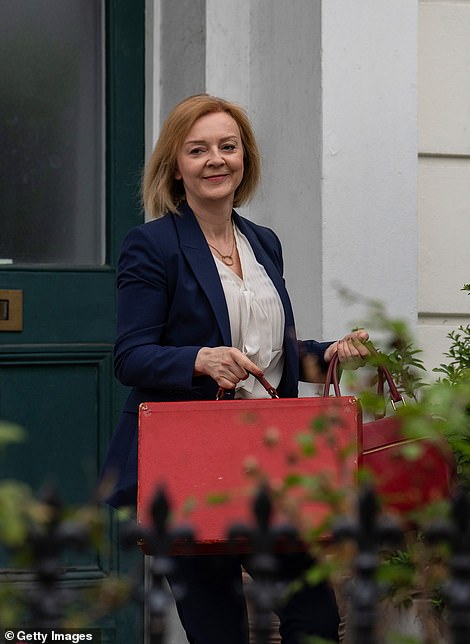 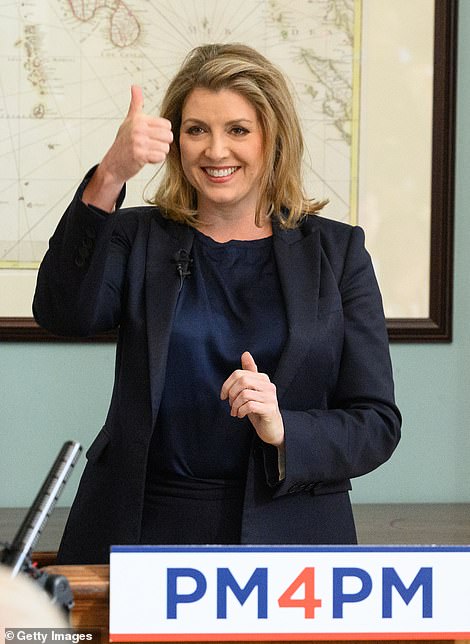 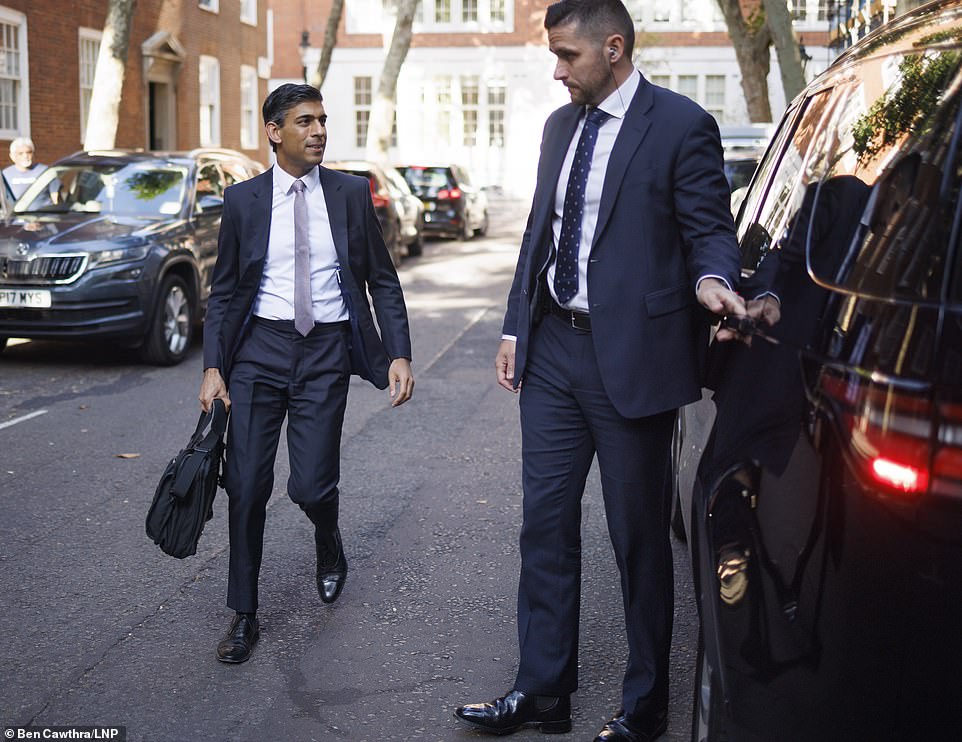 Mr Sunak (pictured left) will hope to boost his tally over 100 in the latest ballot today, after being endorsed by the eliminated Jeremy Hunt, and virtually guarantee his place in the final two

Mr Sunak stubbornly refused to bow to demands for immediate tax cuts – offered by some of his opponents – pointing to the country’s debt mountain.

‘I think our number one economic priority is to tackle inflation and not make it worse. Inflation is the enemy, it makes everybody poorer, and if we don’t act to tackle inflation now it will cost families more in the long run, especially with mortgages,’ he said.

‘I will get taxes down in this Parliament, but I’m going to do so responsibly.

‘Because I don’t cut taxes to win elections, I win elections to cut taxes, and I’m convinced that I’m the best person to beat Keir Starmer and the Labour Party at the next election.’

‘I don’t judge people by their bank accounts, I judge them by their character and I think people can judge me by my actions over the past couple of years,’ he said.

‘Whenever I have needed to step in to support people I have and furlough is a fantastic example of that.

‘But what I would say as a Conservative is I believe in hard work and aspiration and that’s my story and if I’m prime minister then I’ll be making the case for that with vigour.’

He dismissed claims of ‘dirty tricks’ being orchestrated by former chief whip Gavin Williamson on his behalf, stressing that Mel Stride has been running the parliamentary aspect of his campaign.

Asked what Sir Gavin’s role is, Mr Sunak said: ‘Like all the Members of Parliament who are on my team, they are talking to colleagues and making the case for my candidacy because they believe that I am the best person to beat Keir Starmer and the Labour Party and I’m really grateful for all their support.’

Former Equalities Minister Kemi Badenoch and Attorney General Suella Braverman also made it through the first round, receiving 40 and 32 votes respectively.

And former Army officer Mr Tugendhat also making the cut with 37 votes as the standard bearer of moderates.

Chancellor Nadhim Zahawi was ejected from the contest after failing to reach the minimum threshold of 30 votes, but has indicated he will not be endorsing any candidate.

A maximum of three more rounds will be needed to whittle the field down to the last pair.

Ms Mordaunt’s new status is bringing intense scrutiny and she is already facing questions, including on whether she had changed her ‘woke’ views on trans rights in order to win support.

An ally of Ms Truss accused Ms Mordaunt of ‘telling lies’ over her views. ‘She is turning up at hustings claiming she never pushed trans rights when she was equalities minister when there are people in government who know that is not true,’ said the ally.

‘She is telling lies and if she gets in she will revert to type and split the party.’

Former Brexit minister Lord Frost told TalkTV he was ‘surprised she is where she is in this leadership race.’

‘I have worked with Penny… She was my deputy, notionally more than really in the Brexit talks last year,’ he said.

‘I’m sorry to say this, that I felt she did not master the detail that was necessary in the negotiations last year.

‘She wouldn’t always deliver tough messages to the European Union when that was necessary. And I’m afraid she wasn’t sort of fully accountable.

‘She wasn’t always visible. Sometimes I didn’t even know where she was. And I’m afraid this became such a problem that after six months, I had to ask the Prime Minister to move her on and find somebody else to support me.’

Lord Frost said a PM needed to be ‘tough’ and ‘able to lead’, adding: ‘I’m talking only about my own experience with her, but on the basis of what I saw, I’m afraid I would have grave reservations about that.’

The result for Mr Sunak was considerably short of the thumping 114 votes Mr Johnson received in the first round of the 2019 contest – when there were fewer Tory MPs.

A YouGov poll found that Ms Mordaunt is the ‘clear favourite for next Conservative leader among party members’.

When Tory members were asked to choose their preferred, Ms Mordaunt convincingly topped the list with at 27 per cent of votes.

Ms Badenoch came a distant second at 15 per cent, followed by Mr Sunak and Ms Truss on 13 per cent each.

The survey also found Ms Mordaunt – who initially appeared an outsider – would defeat any competitor in a run off.

Her margin against Mr Sunak was projected to be 67 per cent to 28 per cent, while the he could lose 59 per cent to 25 per cent against Ms Truss.

However, separate research by Savanta ComRes tonight underlined the challenges Ms Mordaunt would face with the wider electorate. Just 11 per cent of the public and 16 per cent of Conservative voters could correctly identify her when shown a photo.

Mr Sunak also faced questions after failing to land the knockout blow his team had been expecting. While the former chancellor still looked on course to make the final run-off it was no longer clear that he would do so with a big mandate from fellow MPs.

Senior Tories have warned Ms Truss that to be confident of making the final run-off she must see off her rivals on the Tory Right.

One source said she faced ‘humiliation’ if she tried to continue.

But her team insisted she would battle on, with campaign manager Steve Baker saying: ‘We have not yet begun to fight. People underestimate Suella at their peril.’

Mrs Badenoch also showed no signs of backing down. One source on her campaign said: ‘She is going to do it.’

Former Tory leader Sir Iain Duncan Smith, who is backing Ms Truss, last night urged fellow Brexiteers to unite behind her and warned that divisions could allow Miss Mordaunt to slip through.

Calling for a ‘unite the Right’ candidate, Sir Iain said: ‘If common sense played any part in these things, it would be over in 24 hours. But of course it doesn’t.’