Man, 48, is allergic to ELECTRICITY

Man, 48, is allergic to ELECTRICITY: Father-of-three says he is a prisoner in his own home and has had to paint his bungalow in special paint to block out 5G and radio waves

A man has become a prisoner in his own home after discovering he is allergic to electricity.

Bruno Berrick, 48, from Rothwell in Northamptonshire, was a ‘normal guy’ until he began to suffer debilitating fatigue, burning sensations, ‘popping’ in his head, and underwent a dramatic five-stone weight loss four years ago.

The father-of-three says it took him years to realise he was suffering from a rare and controversial condition called Electrosensitivity – also known as Electromagnetic hypersensitivity, Electrophobia, or Electromagnetic Field Intolerance Syndrome.

The former builder and greyhound trainer, who lives with his partner of 11 years Lisa Chambers, 34, and his three daughters, has now coated his bungalow in special paint designed to block out 5G and radio waves. 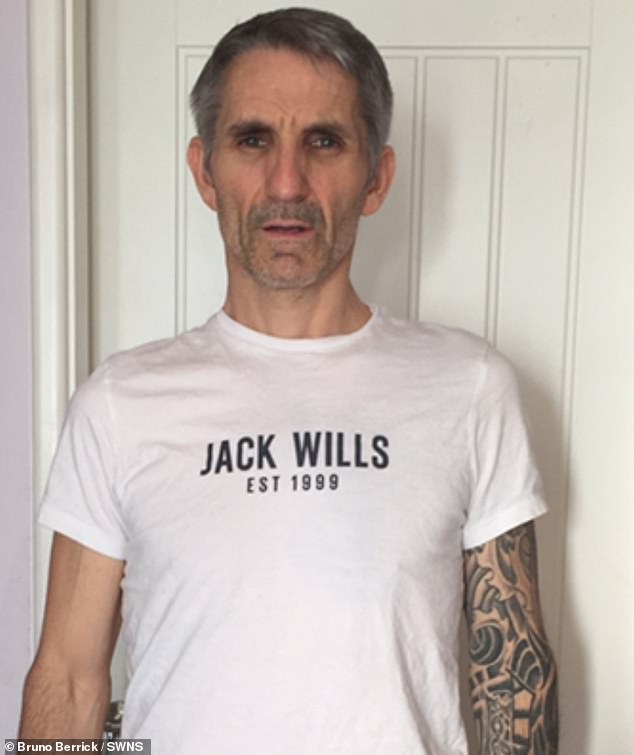 Bruno Berrick (pictured after he became ill), 48, from Rothwell in Northamptonshire, suffers from a rare and controversial condition called Electrosensitivity 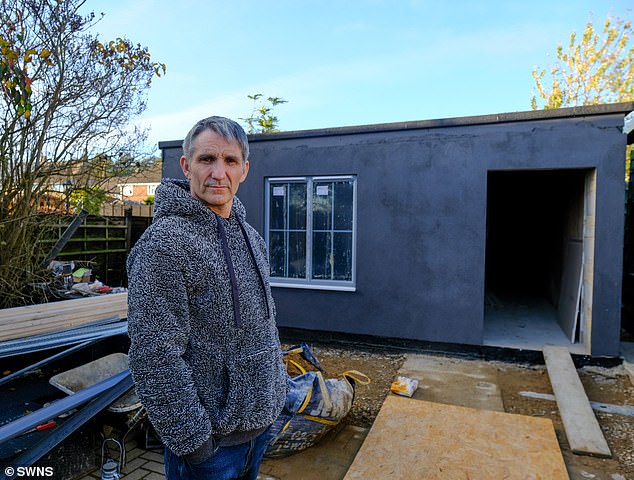 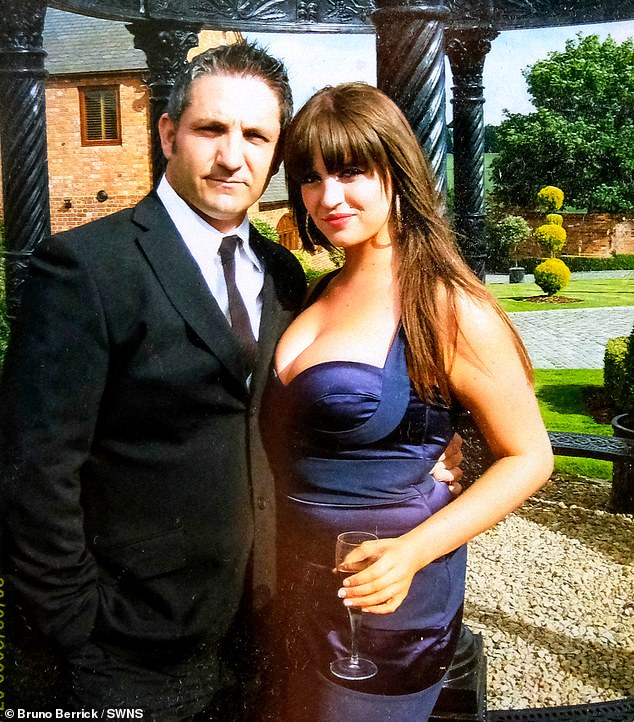 Mr Berrick, who lives with his partner of 11 years Lisa Chambers (pictured together before Mr Berrick became ill), 34, and his three daughters, said he first began experiencing his symptoms four years ago

At home Mr Berrick and his family also keep electricity usage to an absolute minimum – leaving lights off in the evening, keeping the heating off, and never doing normal every-day activities like watching television.

Mr Berrick said: ‘All these people are saying ”they’re idiots” and all that but I’m a normal lad.

‘I was just your normal everyday bloke, you know? I was a greyhound trainer – trained greyhounds for a living, I was working all day, I’ve got three little kids, I’m living proof of what it does to you.

‘All these people on the TV and in the papers and saying ”they’re just 5G idiots” and all this but if you put me in front of somebody with a mobile phone or put electricity on you see what happens to me.

‘Nobody can say it doesn’t affect you because I’m living proof.’

He added: ‘I’ve been seriously ill for about four years – nobody could find out what it was. I went to Harley street doctors, they didn’t have a clue – they called me ‘the mystery man.’

Reports suggest some four per cent of Britons claim to suffer from sensitivity to electromagnetic fields (EMF) but whether or not it is a real condition continues to be a topic of debate.

Some experts claim it is imagined but Mr Berrick and his partner say his condition is all too real.

The father-of-three has spent £200,000, travelling to countries, including the U.S. and Germany, trying to find out what was wrong with him after becoming ill.

He continued: ‘I went everywhere, spent about £200,000 trying to find out what was wrong with me. 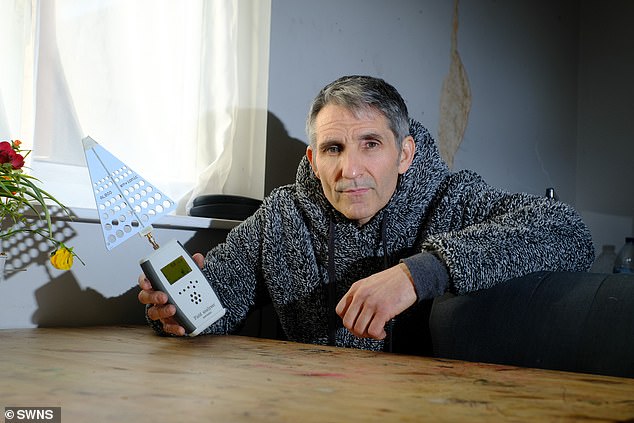 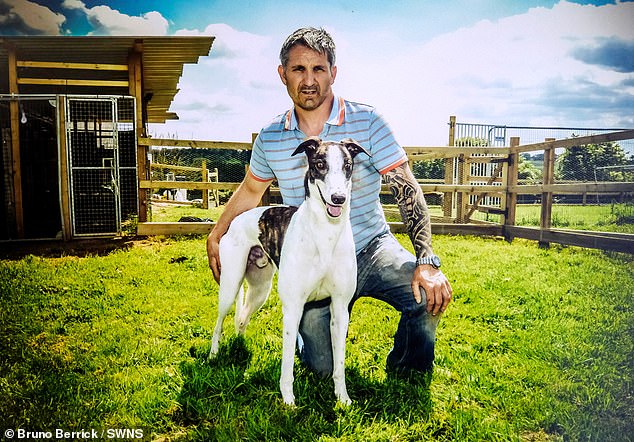 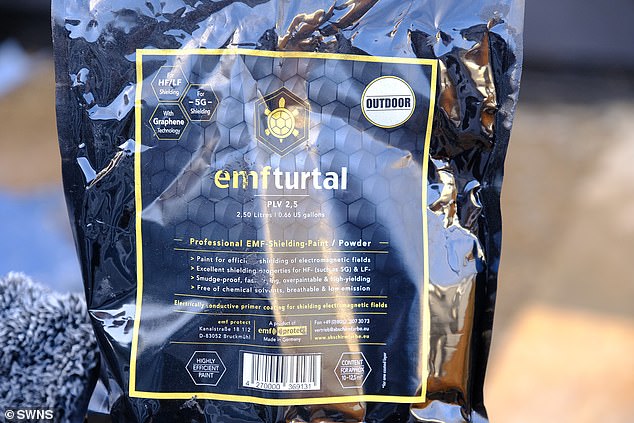 ‘I was like a bag of bones. I was in bed for six months with chronic fatigue but nobody knew what it was.

‘I had a clicking and popping sensation in my head when there was electricity on, and a burning face when I went outside.’

Eventually, he started to find answers in the American west coast city of Seattle where he tested positive for pesticide poisoning.

He said: ‘In 2016 I got poisoned by pesticides because I lived next to a field that they were spraying but nobody knew what it was.

‘I ended up about a year and a half later having to go to America, Seattle in Washington and they found it in about two days. They sent a urine sample to Kansas and it came back and said I was full of pesticides.

‘Basically, it stripped my immune system. It went down to nothing and I kept getting infection after infection and it’s turned into this. Now, if I’m near a mobile phone I nearly collapse from the radiation from it.’

Despite finding answers as to why he had suddenly started feeling different, Mr Berrick did not know what was wrong with him until he met Geoff Simmonds who also suffers from the condition. 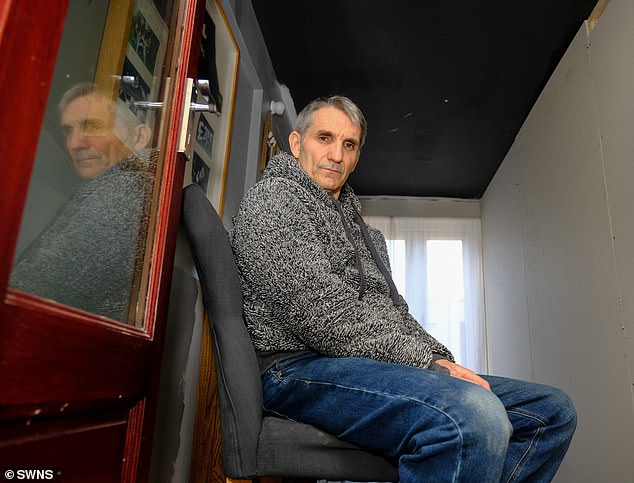 The father-of-three travelled to countries, including the U.S. and Germany, to find out what was wrong with him 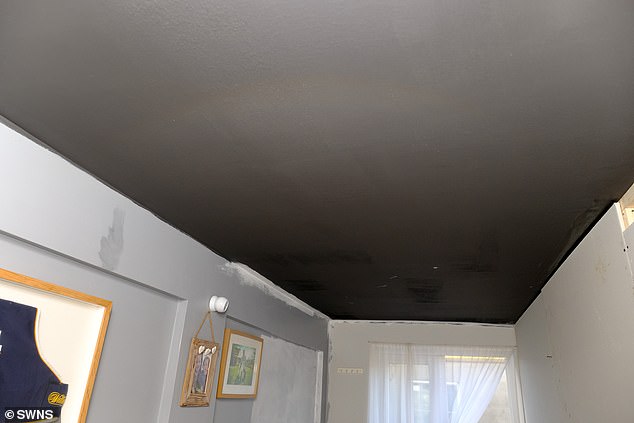 He said: ‘I went to a seminar in Brighton about a year ago and there was a man there who had the same problem as me and he did a seminar on it.

‘A load of doctors from around the world came to this seminar and I thought ‘Jesus, that sounds like me.

‘Geoff told me you ‘will not get better until you’re totally protected – away from wi-fi internet, mobile phones, everything.’

Mr Berrick’s partner Lisa Chambers added: ‘He sent us an EMF reader, he said go round the house and see where it gets the highest.

‘We went upstairs into our little girl’s room and it was getting higher and higher and we pointed it out the window and there was a phone mast in direct view of our bedroom window.’

Relieved to feel like they had identified the problem, but eager to solve it the couple moved to a caravan in a remote part of Rutland to escape.

Ms Chambers said: ‘That was what was making him feel so bad so we decided to get out of that house, because there was no way he was trying to get better there, and we moved into a caravan down at his dads in the middle of the country where there’s nothing there.

‘We were there for about six months and he started to really pick up. He started to gain some weight and he was able to play with the kids again which he didn’t do in the whole four years at all, he couldn’t even read a book or anything.’

When the couple moved back they set their sights on their new home which has now been made secure for Mr Berrick.

He said: ‘I’ve come here, put a stone and a half on – 20lb in four months. I can’t have the electric on: no lights, no heating, no TV, nothing. If I do, my eyes go black within ten minutes, my eyes sink into the back of my head and I look about 10 years older.

‘When we used to live next to a phone tower and I was shaking physically and trembling inside.

‘When I stay in this house I’m an absolutely normal man.’

Despite being able to keep his symptoms at bay, Mr Berrick is now trapped in his protected house.

Ms Chamber said: ‘He cannot leave the house because people are walking around with phones all the time and within five minutes of him walking past them he will be seriously paralysed.

‘It’s hard for people to get their head round it but when you’ve lived with it for four years its absolute hell really. You know what it’s like these days, it’s technology crazy.’

She added: ‘We’re having a building built in the garden for him because the darker nights are coming now.

‘We’ve got three kids and we cant put the heating on, we can’t put the lights on so he’s having a building.

‘We’re getting that all protected for him and putting a wood burner in there and a snooker table so he’s got something to do because he can’t watch TV and he’s read every book under the sun already.’

END_OF_DOCUMENT_TOKEN_TO_BE_REPLACED

END_OF_DOCUMENT_TOKEN_TO_BE_REPLACED
Recent Posts
We and our partners use cookies on this site to improve our service, perform analytics, personalize advertising, measure advertising performance, and remember website preferences.Ok