Several people have been stabbed and one taken to hospital in a critical condition after a party turned violent on Spencer Street overnight.

A 19-year-old man who had been stabbed several times alerted police near Southern Cross Station at around 2.20am on Monday morning, police said. 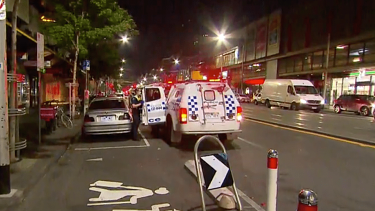 Police cordon off Spencer Street while they investigate an incident where multiple people were stabbed at a party.Credit:Nine

Investigators have established a crime scene on Spencer Street. All traffic between Little Bourke and Bourke Street was being diverted around the scene on Monday morning.

Catch all the day’s headlines

At the end of each day, we’ll send you the most important breaking news headlines, evening entertainment ideas and a long read to enjoy.  Sign up here.