Home » World News » Man in battle over £410K from brother&apos;s estate -which he &apos;gave away&apos;

Window cleaner, 58, fights court battle with relatives over £410,000 from dead brother’s estate that included his house and Osmond Family memorabilia which he says he gave away to the poor

A window cleaner who says he gave away his dead brother’s £400,000 fortune to the poor faces jail in a court war with his empty-handed relatives.

Peter Ivory, 58, claims to have travelled the UK with a bag of £150,000 in cash giving handouts to ‘hard-working poor and homeless people’.

His sibling Mick Ivory, 61, died in November 2018 without a will and Peter says while on his deathbed, Mick made him promise not to let the rest of their family ‘get their hands on his hard-earned money’.

The tube driver’s estate, which included money from the sale of his home in Butter Hill, Wallington, Surrey, came to £414,000 and totalled £367,000 after expenses. 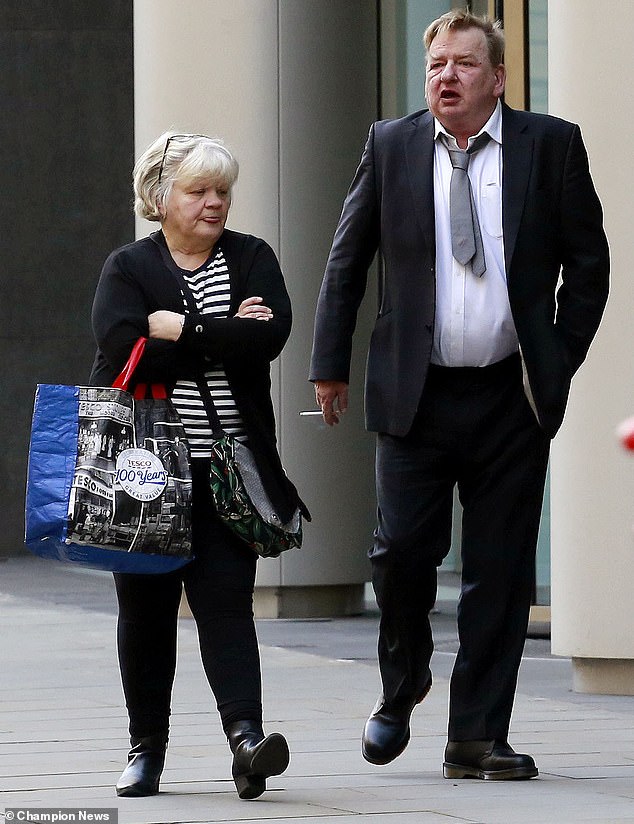 Peter Ivory, 58, (pictured with his wife Jackie) says he gave away his late brother Mick’s £400,000 fortune by handing out cash to the homeless around the UK after he promised not to let their other siblings get the money. He now faces jail if he cannot explain where it has gone

Peter is also said to have received his brother’s beloved Lurcher dog Lady and a collection of rare Osmond Family memorabilia, accumulated by his wife Pat, an avid fan, who died four years before Mick.

Peter, who lawyers say received all the fortune, told London’s High Court he passed the memorabilia on to the Osmonds fanclub and is looking after the dog himself.

Peter says he distributed this money to ‘a couple of hundred people,’ including strangers and the homeless.

Peter is now at war in court with his two surviving brothers, Alan and John, and his nephew Michael, who say Mick’s wealth should have been split between them all.

Judge Paul Teverson heard that when Mick died without making a will, Peter handled his affairs and arranged the sale of the his house. 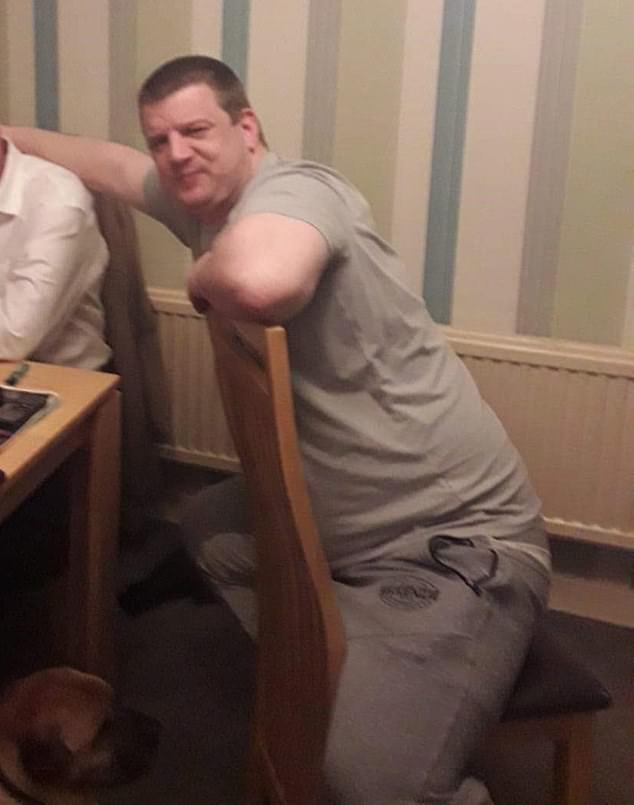 Now other brothers Alan and John Ivory along with nephew Michael (pictured) say they are entitled to share of late tube driver Mick’s fortune. Mick died in November 2018 without a will 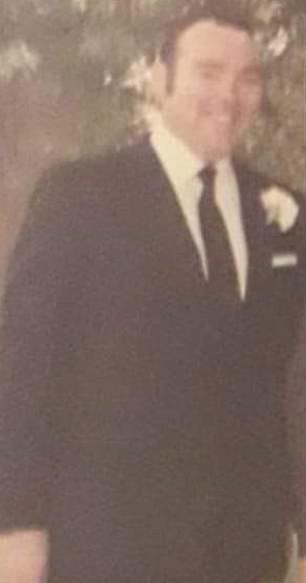 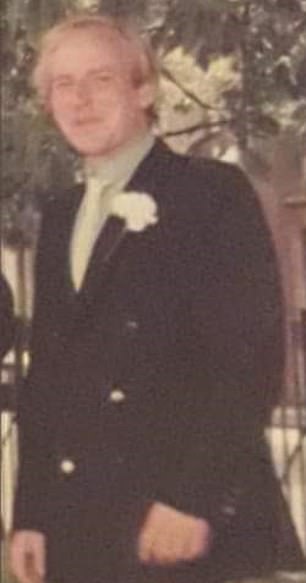 Peter claims Mick made him promise, while on his deathbed, not to let the rest of the family ‘get their hands on his hard-earned money’ (pictured left is Alan and right John in undated photographs)

Under normal intestacy laws, which apply when someone dies without a will, Alan, John and Michael expected to share the money equally with Peter as Mick’s surviving next of kin.

But Peter says Mick made him promise not to let the rest of his family ‘get their hands on his hard-earned money’.

Peter told the judge he has splashed much of his dead brother’s cash on helping out the poor and homeless, saying: ‘There’s no money left now’.

And he is determined that the rest of the family – including his two surviving brothers Alan and John – should inherit nothing, insisting Mick wanted it that way.

His defence to his nephew and brothers’ claim to share of the estate is based on the legal concept of ‘donatio mortis causa’ meaning a gift given by a sick person close to death.

He says his brother’s deathbed orders meant he was gifted the estate before Mick died, leaving nothing in the pot to divide. 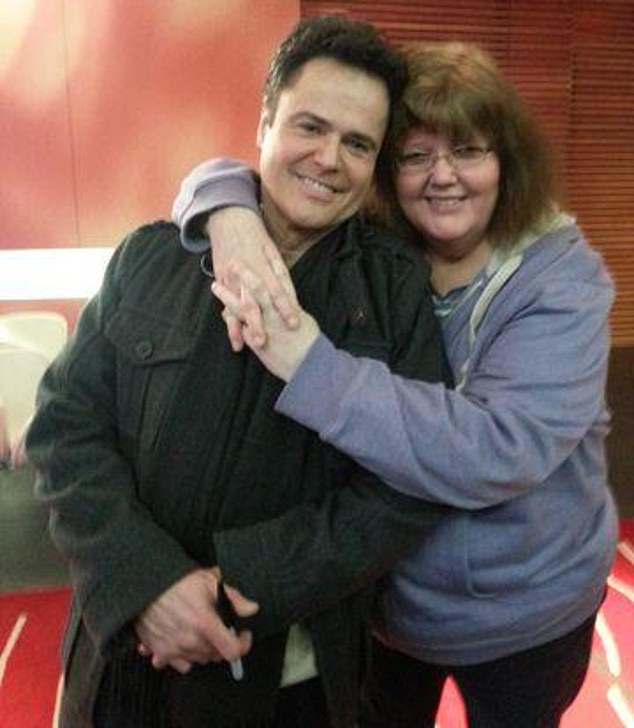 As well as money from the Surrey home and his brother’s dog, Peter also received a collection of rare Osmond Family memorabilia, accumulated by Mick’s wife Pat (pictured with Jimmy Osmond) who died four years before Mick. He is said to have given these items to a fanclub

He told the High Court: ‘Mick told me to keep it all and, if I couldn’t keep it, to give it away. His whole plan was to make sure they didn’t get it.’

He then withdrew £150,000 in cash from the bank for this purpose, Peter added outside court, travelling from his home in Hendon as far afield as Cambridge with his wife Jackie to bail out beggars on the street.

His wife Jackie said outside court that they also helped a friend go on holiday and gave money to a school.

She said: ‘Peter took out £150,000 in cash and gave the money away over the course of one month, including to homeless people with their dogs in Cambridge.

‘He gave some to dog charities, as Mick and Pat loved dogs as they had no children.’

When Peter’s siblings began challenging him about Mick’s estate, he wrote back to his brother, Alan, in June last year, explaining Mick’s alleged wishes, the court heard.

He wrote that when Mick was dying he made him promise three things: to care for his beloved dog, Lady, to ensure Pat’s treasured collection of Osmond memorabilia went to a good home, and to make sure Alan did not receive a penny of his fortune. 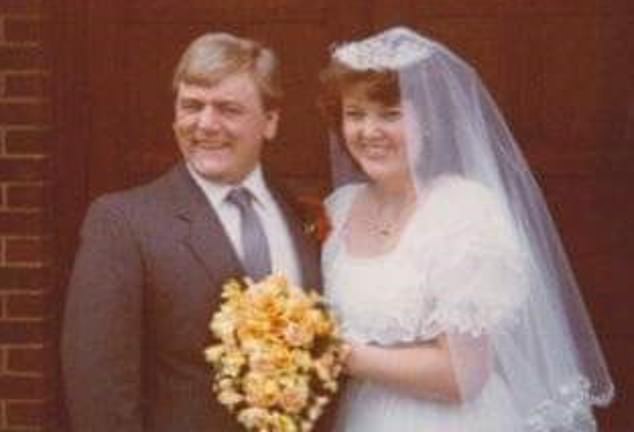 To fulfill his brother’s wishes, Peter claimed that he took £150,000 in cash around the UK and handed it out to homeless people in cities such as Cambridge. His wife Jackie said money was also donated to a school and dog charity (Mick is pictured with his wife Pat at their wedding) 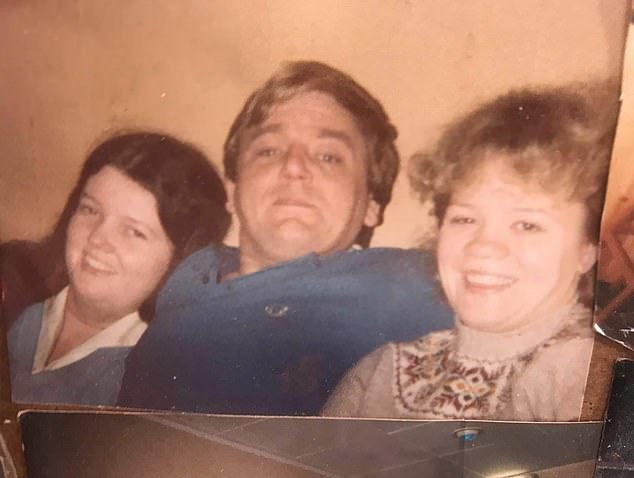 He told Alan in the letter that Mick ‘could not bear the thought’ of Alan’s wife having access to the money he was leaving.

Peter also wrote that Mick had also ‘made me promise not to give his well-earned money (to) the rest of the family.’

‘So instead I have given it to hard-working poor and homeless people, so there is no money left and you must do what you think is morally right like I have done by respecting his wishes,’ the letter concluded.

‘They want the money and they think I want it, but I don’t give a monkey’s about the money,’ Peter told the court.

‘Can you tell the court in writing where the money went?’ asked the judge.

He replied: ‘I can tell you how I distributed it. All the money has been distributed according to Mick’s wishes and there is no money left.

‘I was trying to do what Mick wanted me to do,’ he told the judge, adding that he and his wife, Jackie, had also helped care for Mick when he was dying.

Peter said: ‘He trusted me with everything. He made me promise to look after Pat’s Osmond family memorabilia and I gave it all to the Osmond fan club.’

Setting out Peter’s case, Judge Teverson said: ‘Peter told his solicitors that the claimants (his brothers and nephew) would get what they deserved which was nothing.

‘Giving them money from the estate would have gone against Mick’s intention and Peter would be breaching his duty if he did not carry out the deceased’s wishes.

‘Peter has been trying to ensure that the claimants never receive a penny from the estate, Mick’s dying wishes were thus carried out by Peter. ‘

Judge Teverson added: ‘Peter has denied retaining any money for himself. He says Mick made him promise to prevent other family members getting their hands on his hard-earned money. He would have preferred that Peter just give the money away.’

‘Nor is there any evidence that Peter has complied with his wishes other than his assertion in his witness statement that he has given the money away,’ he said.

‘If he has given it away to homeless and hard-working people, he should be in a position to give specific names of people he gave the money to, and provide receipts.

‘He has done neither, all we have is a single item stating: “I gave the money away”.’

Peter has admitted receiving £414,000 worth of assets from Mick’s estate, said the barrister.

After a brief hearing, Judge Teverson adjourned the case, ordering that Peter Ivory give a full account of the money he has distributed.

Commenting on Peter’s claims that he had given the money away: ‘This is not a small sum of money, it is not the type of amount one could expect to see distributed in notes on the street to needy people.

‘The claimants are entitled to know what happened to the money. The court will not be satisfied by saying that the estate has simply been given away. I want to know where the money has gone.’

The judge attached a penal notice to his order, meaning Peter Ivory could face a jail term if he fails to obey it.

Related posts:
£410K, battle, from, in, man, over
Celebrities

END_OF_DOCUMENT_TOKEN_TO_BE_REPLACED

The 1.8-metre ARCT telescope at Alberta’s Rothney Astrophysical Observatory is the second largest in Canada, used by both astronomers and students to capture images of stars millions of light-years away. But as Calgary expands, those images are being threatened by excessive artificial and outdoor light also known as light pollution.

END_OF_DOCUMENT_TOKEN_TO_BE_REPLACED

UN court says Britain should 'rapidly' give up Chagos Islands

ICJ opinion calls on the UK to ‘complete the decolonisation’ of Indian Ocean archipelago claimed by Mauritius. The United Nations’ highest court has called on Britain to quickly cede control over a chain of islands in the Indian Ocean, the largest of which houses a strategically important American military base,

END_OF_DOCUMENT_TOKEN_TO_BE_REPLACED

The 57-year-old incumbent received 58.27 percent of Sunday’s vote, which observers say had no major irregularities. Senegalese President Macky Sall has won re-election without the need for a second round of voting, giving him five more years in office.  Following the announcement, Idrissa Seck, the opposition candidate and runner-up in

END_OF_DOCUMENT_TOKEN_TO_BE_REPLACED
Recent Posts
We and our partners use cookies on this site to improve our service, perform analytics, personalize advertising, measure advertising performance, and remember website preferences.Ok