A ‘panicked’ rail passenger punched a Virgin Trains worker in the face after she asked him to show her his ticket, a court heard.

The shocking, unprovoked attack, which took place at 11am on July 19, was caught on CCTV. 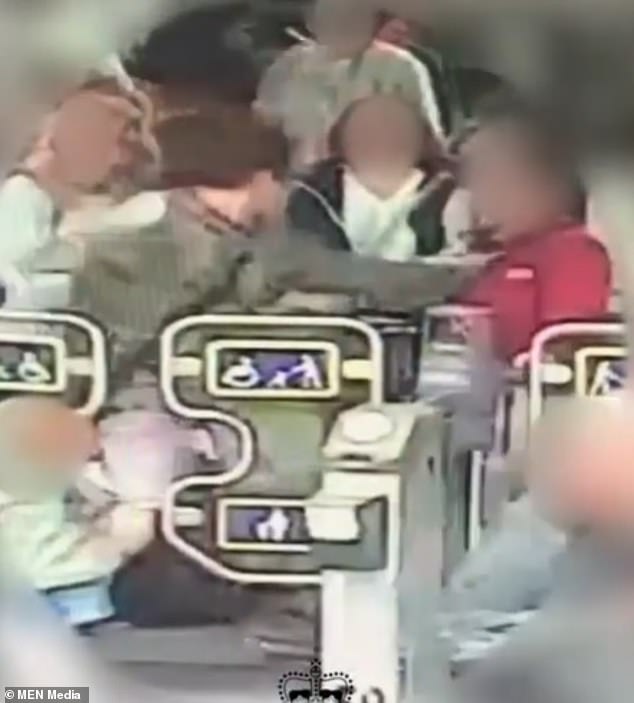 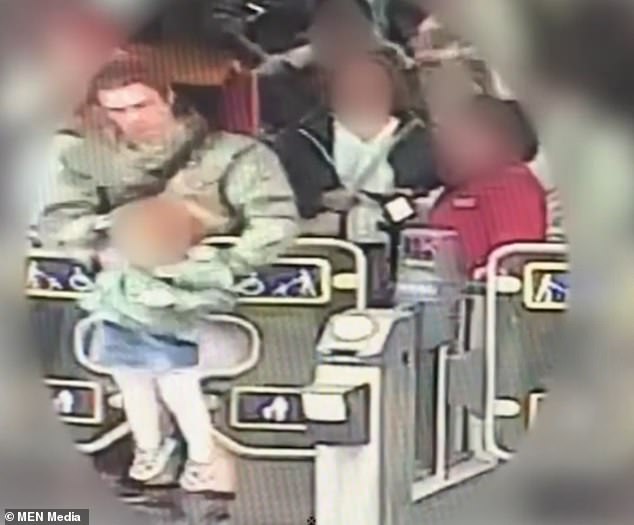 Corr, pictured here moments before the attack, lifted his daughter over the ticket barrier. He pleaded guilty to assault and was handed a 200-hour community service order. He was also ordered to pay his victim £100 in compensation and £175 costs

Yesterday, Manchester Magistrates’ Court heard that after getting off a train with his three-year-old daughter, Corr approached the ticket guard on platform five and asked to be let through the barrier.

She asked to see his ticket, he told her his wife had it then lifted his daughter over the barrier, banging her head on a girder in the process.

Corr was then heard to say ‘What have you f****** done?’ before punching the victim in the face ‘with a clenched fist’.

Alan Bakker, prosecuting, described the attack as ‘totally unprovoked’. He added it had left the guard ‘dazed’ and suffering from swelling and bruising to her cheekbone and said she had taken long periods off work since.

Paul Green, defending, told the court, Corr has difficulty ‘managing his emotions’ and was thought to suffer from post-traumatic stress disorder after being the victim of a knife attack.

Mr Green said when the service arrived at Piccadilly, Corr was ‘panicking and in a heightened state of anxiety’ because his wife, who was late and had missed the train, had the tickets.

‘He accepts full responsibility for the assault,’ added Mr Green.

‘He knows people working on the frontline do not deserve to be treated like that.’

In May, he was convicted of criminal damage after smashing up a pub TV when he became ‘enraged at a VAR decision in a football match’.

Corr pleaded guilty to assault and was sentenced to 200 hours community service and ordered to pay £100 compensation with £175 costs.

END_OF_DOCUMENT_TOKEN_TO_BE_REPLACED

END_OF_DOCUMENT_TOKEN_TO_BE_REPLACED
Recent Posts
We and our partners use cookies on this site to improve our service, perform analytics, personalize advertising, measure advertising performance, and remember website preferences.Ok