Margaret Thatcher hid her daughter in a CUPBOARD for wearing jeans

Margaret Thatcher once hid her daughter in a CUPBOARD for wearing jeans at No 10, her private secretary Lord Butler reveals

Margaret Thatcher made her daughter hide in a cupboard in 10 Downing Street for wearing jeans, her private secretary has revealed.

Lady Thatcher told Carol to get in the furniture when Lord Butler visited her flat to discuss politics.

The revelations are to be laid bare by Lord Butler in a BBC Two documentary called Thatcher: A Very British Revolution. 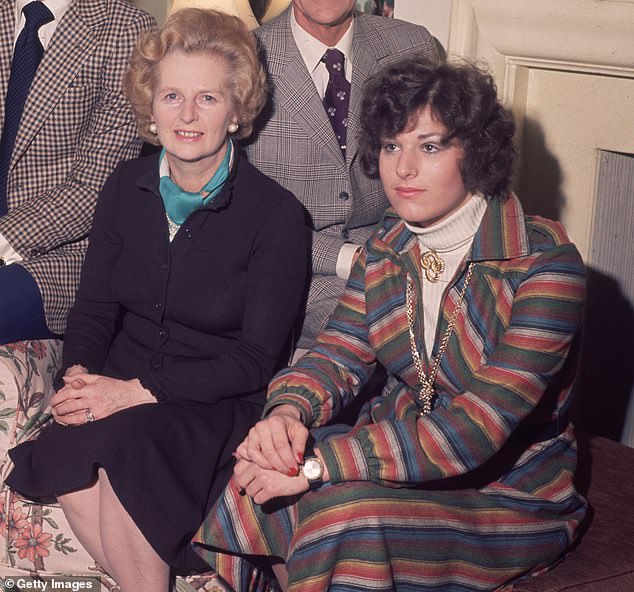 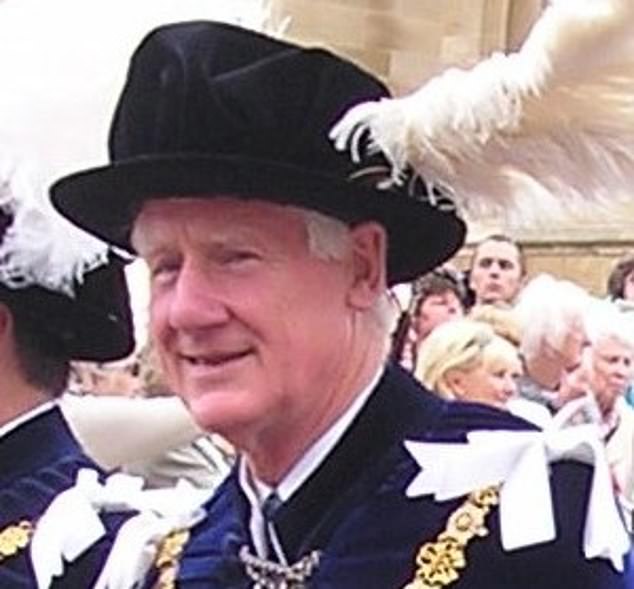 The revelations are to be laid bare by Lord Butler (pictured) in a new episode of the BBC Two documentary Thatcher: A Very British Revolution

He told the Daily Telegraph: ‘I have a vivid memory of going up to the flat and into the sitting room to discuss some point with Margaret Thatcher and in the course of our discussions I heard a rustling in a cupboard in the corner of the room.

Monday night’s episode of the documentary tracks how the former prime minister juggled the job and raising her children Carol and Mark. 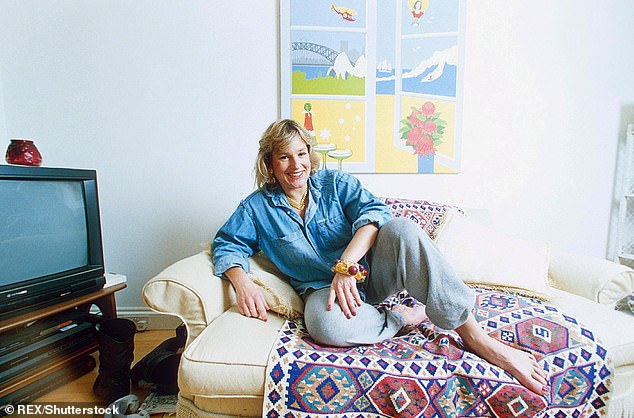 Lord Butler said: ‘I have a vivid memory of going up to the flat and into the sitting room to discuss some point with Margaret Thatcher and in the course of our discussions I heard a rustling in a cupboard in the corner of the room’. Pictured: Carol 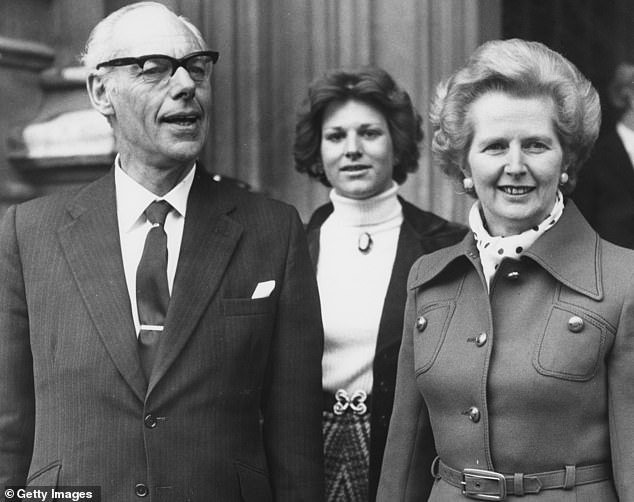 He added: ‘And I said, ‘What is that? Are there mice up here?’ And she said, ‘No, that’s Carol.’ I said, ‘Why is Carol in that cupboard?’ And she said, ‘Well, you know, she was wearing jeans so I told her to hide herself while you were coming in’. Pictured: Lady Thatcher with Carol and husband Denis

One clip shows her in an interview in 1985, where she says: ‘They arrived and they were very small and they needed a lot of looking after. And you do change when you have had children.

‘And I remember thinking, if I’m not careful, I’m never going to make an effort to get back to intellectual pursuits, I’m just going to be so overcome with this. And I really ought to be able to do both.

‘It was a conscious decision that I really must look after the children and do something else as well.’ 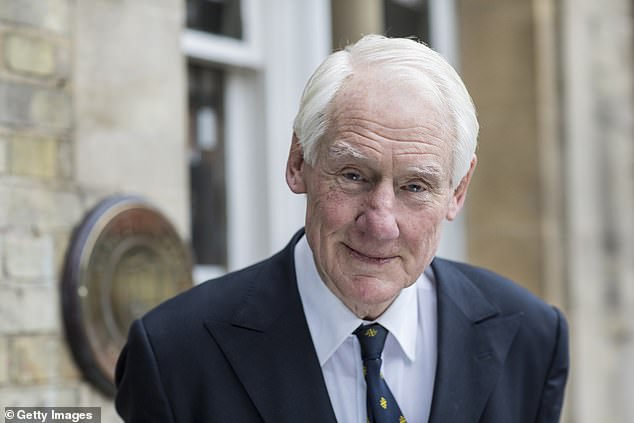 But Lord Powell – another former private secretary – said: ‘The challenges of being a mother and Prime Minister were considerable and, to be perfectly frank, she rather failed.

‘She didn’t have time enough for her children. She rather over-indulged Mark when she perhaps under-indulged Carol.’

The episode also sees Jonathan Aitken talk through a notorious interview with Lady Thatcher in 1985.

He discusses how she was surprised to hear from David Frost that some Conservatives called her ‘TBW’, which stands for ‘that bloody woman’. 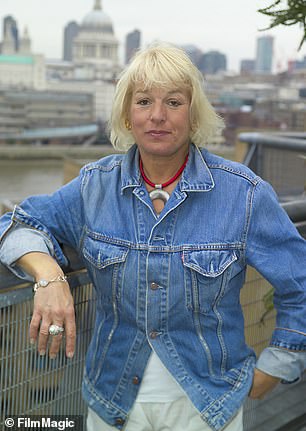 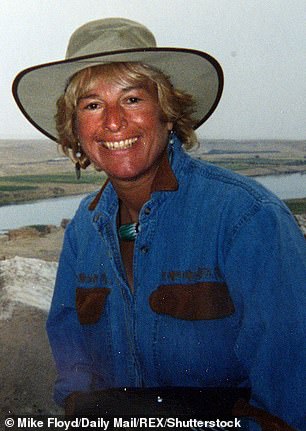 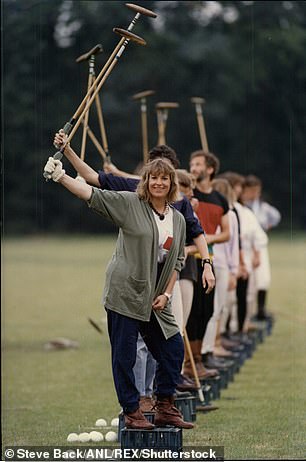 But Lord Powell – another former private secretary – said: ‘The challenges of being a mother and Prime Minister were considerable and, to be perfectly frank, she rather failed.’ Pictured: Carol Thatcher

She replied: ‘The what? I’ve never heard of it. Oh dear, how dreadful.’

It transpired that Mr Aitken had told his friend Mr Frost what TBW meant only a week before the interview with Lady Thatcher.

The documentary has already revealed how Lady Thatcher would often cry due to the pressures of being Prime Minister and suffered with anxiety over the top job.

The series also claimed she initially loathed the Iron Lady nickname that came to define her tenure as prime minister.

The Tory leader branded the moniker ‘terrible’ after it was coined by a propaganda newspaper for the Soviet Army in 1976.

The major documentary into Baroness Thatcher’s ascent to power revealed she was convinced to use the name to her advantage by a close aide.

Meanwhile the documentary also revealed her staff saw her as ‘approachable, down to earth and kind’ – and sensitive. 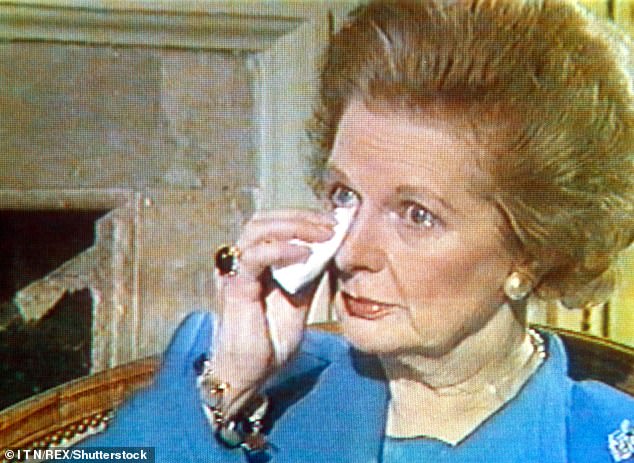 Margaret Thatcher would often cry due to the stress of being prime minister, a new BBC documentary has revealed. She is pictured here wiping a tear from her eye after announcing her retirement in 1992 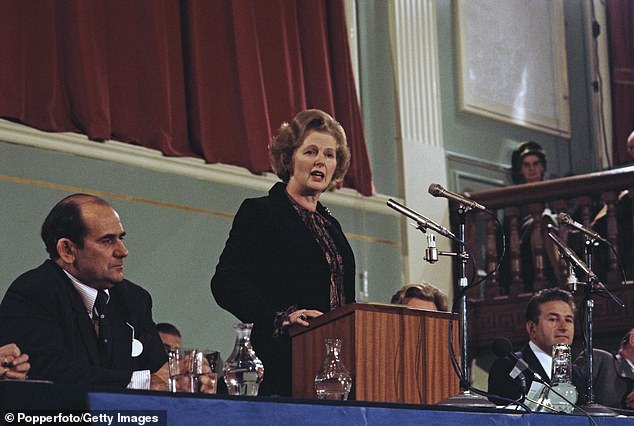 Mrs Thatcher, pictured in 1978 at a Local Government Association conference, also supposedly hated her ‘Iron Lady’ moniker initially before being persuaded by aides that it was a vote winner 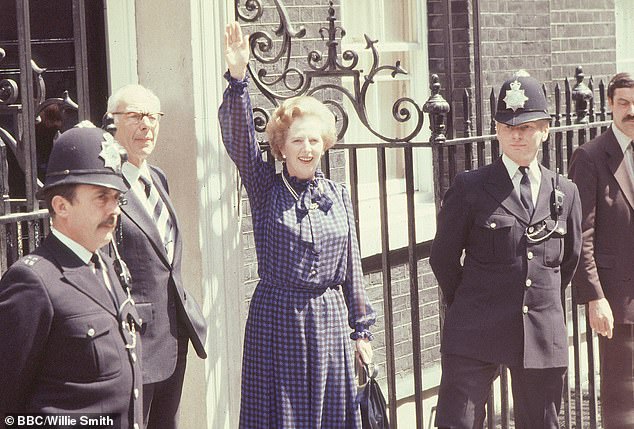 Her colleagues claimed she was ‘approachable’ and ‘down to earth’ in the BBC documentary. She is pictured here after winning the 1983 general election

Private secretary for foreign affairs John Coles said: ‘I’ve seen her weeping. I’ve seen her desperately anxious – that’s not the Iron Lady image, but it was very much a part of her.’

Mrs Thatcher, who died in 2013 aged 87, was famously seen crying in public when she left No. 10 Downing Street when ousted as prime minister in November 1990.

The pivotal advice over her nickname was given by Sir Gordon Reece, the flamboyant ex-television producer who softened the politician’s image during her years in opposition. Her change of heart was revealed by the BBC’s political correspondent, Michael Cockerell.

He said: ‘When the Soviet paper called her the Iron Lady she said: ‘That’s terrible’. Gordon Reece said: ‘No, don’t you understand? It’s exactly what we want. It’s that mixture of strength and femininity in one sentence. Be proud of being the Iron Lady’.’ 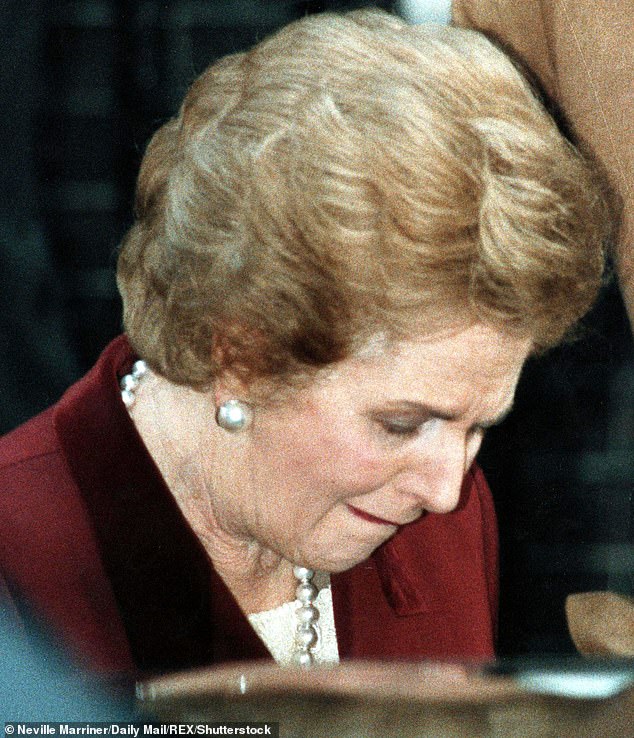 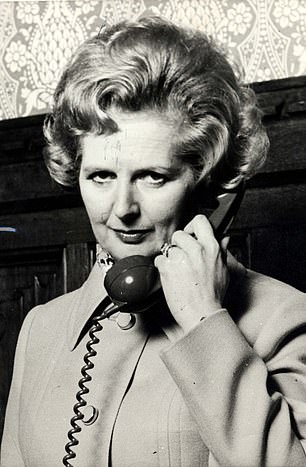 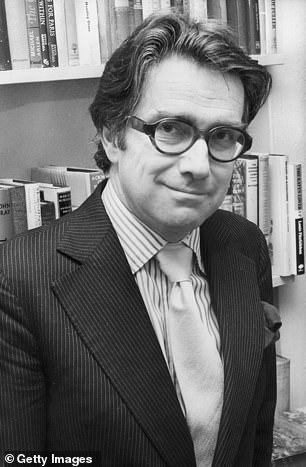 Mrs Thatcher’s (left) aide Gordon Reece, (right) told her to be ‘proud’ of the Iron Lady nickname because it was ‘a mixture of strength and femininity’

The moniker was written in a report by the Soviet Union’s Red Star newspaper which heaped criticism on Baroness Thatcher, who had taken the reins of the Tory party less than a year earlier.

Having been picked up by the British media, she gave the insult her personal endorsement a week later.

During a speech in Southgate, north London, she said: ‘I stand before you tonight in my Red Star evening gown, my face softly made up and my fair hair gently waved, the Iron Lady of the Western world.

‘A Cold War warrior, an Amazon philistine, even a Peking plotter. Well, am I any of these things? … Yes I am an Iron Lady… if that’s how they wish to interpret my defence of values and freedoms fundamental to our way of life.’

As part of his image-altering advice, Mr Reece also made the Tory leader take humming lessons with a National Theatre coach to lower her ‘shrill’ voice and advised her to dress in less fussy clothing. 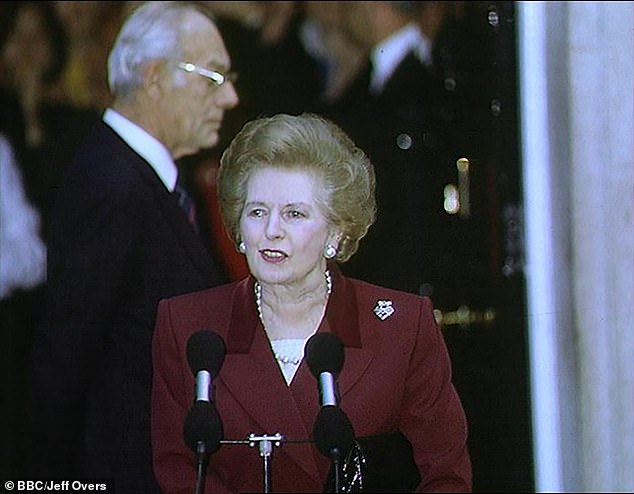 Mrs Thatcher, pictured after her resignation in 1990, also personally dusted her Downing Street flat and ironed her husband’s shirts at Westminster

But female colleagues told the programme she enjoyed chatting about her clothes and hair, with Wendy Baron, director of the Government Art Collection, claiming she was a ‘proper human being’ and ‘approachable…if you dared to approach her’.

The documentary revealed Mrs Thatcher juggled chores alongside running the country – including dusting her Downing Street flat and ironing her husband Denis’s shirts in Westminster.

Mr Coles added if there was a foreign visitor coming she would ‘rush around No. 10 adjusting flowers’.

Another private secretary, Nick Sanders, claimed she cared deeply about her 100-or-so employees.

He told the show: ‘If any of them had a serious family problem, a bereavement or a very ill child, she would stop whatever she was doing and ask us a lot of questions about whether we’d done the right thing, whether we’d been in touch with the right people, whether we had been given all the support we could.’ 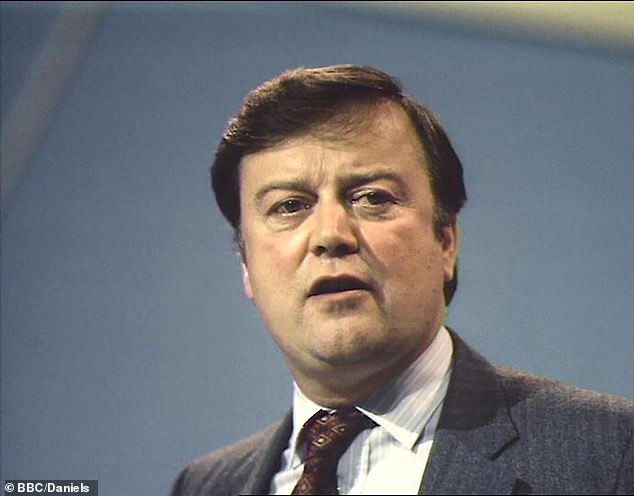 Tory grandee Ken Clarke, pictured in 1988, told the documentary Ted Heath planned to sack Mrs Thatcher as education secretary after becoming PM in 1970 over her ‘milk snatching’ but Tory whips advised against it

Just months after Ted Heath was elected prime minister in 1970, he hatched plans to sack her as education secretary over her national unpopularity.

She had decided to scrap free milk for older primary schoolchildren, which earned her the name Thatcher ‘the milk snatcher’.

The attempt to oust her was recalled by Tory grandee Ken Clarke who said: ‘[Heath] panicked about the fact that this secretary of state for education, who he didn’t like anyway, was now one of the most unpopular women in the country. Ted was going to sack her.’

But the Tory whips’ office advised him against it. ‘He couldn’t sack the only woman in the Cabinet. And on that basis he reluctantly kept her,’ Mr Clarke said.