Home » World News » Marles warns Australia, US must step up to avoid ‘catastrophic failure’ in Indo-Pacific

Marles warns Australia, US must step up to avoid ‘catastrophic failure’ in Indo-Pacific

Washington: Australian Deputy Prime Minister Richard Marles has used his first post-election trip to the US to warn that both countries must lift their games in the Indo-Pacific to avoid a “catastrophic failure of deterrence” in the face of growing threats.

Speaking shortly after he landed in Washington, Marles – who is also defence minister – vowed that Australia would “do its share” to bolster its military capabilities in the region, with the Albanese government determined to “take greater responsibility for its own security” compared to its predecessors. 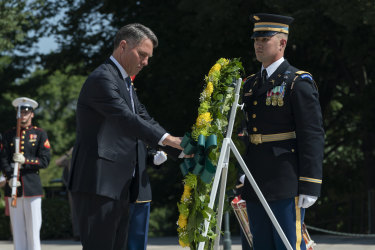 Australian Deputy Prime Minister Richard Marles, left, lays a wreath at Arlington National Cemetery during his first visit to the US since taking office.Credit:AP

While there was “no more important partner to Australia than the United States,” Marles said, both sides would have to step up in the Indo-Pacific given the challenges they faced, from climate change or coercion in the South China Sea to “a military build-up occurring at a rate unseen since World War II.”

“Notwithstanding our strong foundations, we can’t afford to stand still,” he said in a keynote address at the Centre for Strategic and International Studies, one of Washington’s leading think tanks.

“In the years ahead, the US-Australia alliance will not only have to operate in a much more challenging strategic environment in the Indo-Pacific; it will need to contribute to a more effective balance of military power aimed at avoiding a catastrophic failure of deterrence.

“Events in Europe underline the risk we face when one country’s determined military build-up convinced its leader that the potential benefit of conflict was worth the risk,” he said, referring to the war in Ukraine.

Marles’ trip represents the first time he has visited the US since taking office and comes as the Albanese government decides in coming months whether to choose a US or British design for a nuclear submarine fleet promised under the AUKUS strategic pact.

The defence minister flew to Washington to meet his US counterpart Lloyd Austin, as well as other government officials, policymakers and members of Congress, where he will spend the next few days discussing the AUKUS agreement and the ties between the two countries more broadly.

The trip also comes at a critical juncture for Australia’s relationship with China, with the Labor government seeking to mend ties with Beijing while many in the US remain hawkish about its ongoing rise in the Indo-Pacific.

In April, after China and the Solomon Islands sent shockwaves around the world by signing a security pact, Democrat Congressman Joe Courtney, the co-chair of Congress’ so-called “AUKUS caucus”, told The Age and The Sydney Morning Herald that Beijing’s encroachment in the region was like “boiling a frog, where you turn up the temperature bit by bit”.

Marles – who met recently with Chinese Defence Minister General Wei Fenghe – did not mention China directly in his speech, but noted that “for the first time in decades, we are thinking hard about the security of our strategic geography, the viability of our trade and supply routes, and above all the preservation of an inclusive regional order founded on rules agreed by all, not the coercive capabilities of a few.”

In particular, he said there were concerns about the use of force or coercion to advance territorial claims “as is occurring in the South China Sea, and its implications for the any number of places in the Indo-Pacific where borders or sovereignty is disputed.”

He also lashed out at Russia, whose “war against Ukraine is not just a brutal attempt to subjugate a sovereign state – it’s a calculated application of violence, intended to roll back the post-Soviet order from one founded on sovereignty and self-determination, to one governed by the rule of might and force.”

This can’t be allowed to succeed, he said. “Only by ensuring such tactics fail can we deter their future employment, in Europe, the Indo-Pacific, or elsewhere.” 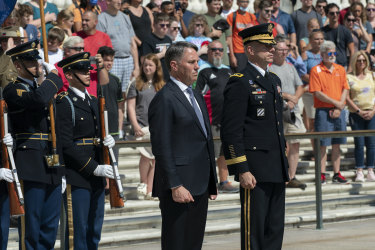 Australian Deputy Prime Minister Richard Marles, at the Tomb of the Unknown Soldier, at Arlington National Cemetery, in ArlingtonCredit:AP

And he vowed that Australia would not take its status in the Indo-Pacific for granted, noting that “the Pacific has been clear in saying that geopolitical competition is of lesser concern to them than the threat of rising sea levels, economic insecurity, and transnational crime. Australia respects and understands this position, Marles said.

“Pacific Island countries have choices about their partners. And we will work to earn their trust,” he said.

Marles began his trip on Monday morning (US time) by visiting Arlington National Cemetery in Virginia, where those who served in American military conflicts are buried, including former presidents John F Kennedy and William Taft.

The defence minister laid a wreath at the Tomb of the Unknown Soldier ahead of the keynote address at the CSIS in Washington.

Later this week he will address the Australian American Leadership Dialogue, which Liberal leader Peter Dutton will also attend in between holidaying overseas.

The Australian American Leadership Dialogue, whose new chief executive is former speaker of the House Tony Smith, is a joint initiative now in its 30th year that brings together members of government, enterprise and the broader community to strengthen the Australian-American bilateral relationship.