Authorities rescued 10 students and a bus driver in Maryland Wednesday after the bus became submerged in water because of heavy flooding.

Students from Frederick’s Catoctin High School and Thurmont Middle School were on the bus, riding home from school. 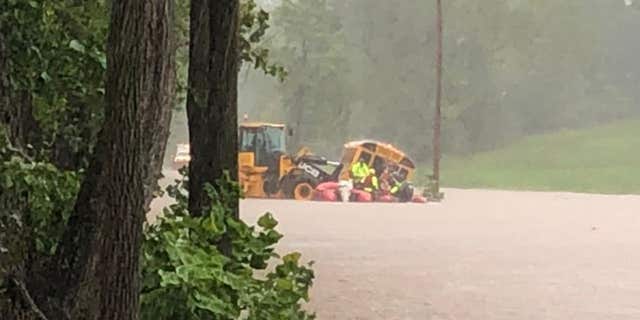 Frederick County Sheriff’s Office spokesman Todd Wivell told Fox News the bus tried to cross a bridge on which water was already going across, and the bus became stuck.

The sheriff’s office received a 911 call and the Frederick County Division of Fire and Rescue Services was dispatched, Wivell said.

The rescue crew arrived on scene and successfully rescued all 10 children and the driver. There were no injuries, Wivell said. The children were later reunited with their families.

Wivell told Fox News that there were no drownings reported but the department conducted at least 15 water rescues in the northern part of Frederick County Wednesday.

The sheriff’s office decided to turn all the school buses back to school and requested that parents coordinate with the schools to pick up their kids.

“That was done for the safety of the children across Frederick County,” Wivell said.

More than 80 roads were closed because of flooding in the area, according to Frederick County fire and rescue officials.

A video taken by FOX 5 DC’s Lindsay Watts shows a car partially submerged in water after a rescue operation.

The station reports that the greater Washington, D.C., region was hit with severe weather on Wednesday, with multiple tornadoes and flooding.