New York: Ghislaine Maxwell was “number two” in the hierarchy of Jeffrey Epstein’s employees, a former pilot for the deceased financier told Maxwell’s sex abuse trial in Manhattan on Tuesday.

Pilot Lawrence Visoski jnr, who is testifying for the government, recalled how Maxwell would often contact him to schedule flights for sex offender Epstein. 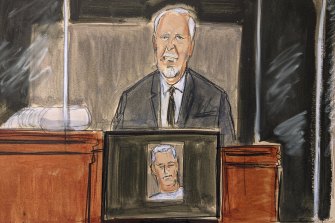 “Ms Maxwell was number two. Mr Epstein was a big number one,” Visoski told jurors. “She was the one that pretty much handled most of the finance, my expenses, spending in the office.”

Maxwell, 59, has pleaded not guilty to eight counts of sex trafficking and other crimes, including two perjury charges that will be tried at a later date. She faces up to 80 years in prison if convicted on all counts. 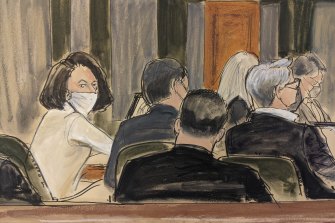 A courtroom sketch of Ghislaine Maxwell sitting at the defence table during the final stages of jury selection on Monday.Credit:AP

Lawyers for Maxwell have said that the British socialite was being scapegoated for crimes Epstein committed. Epstein died in jail in 2019 while awaiting trial on sex abuse charges.

Earlier on Tuesday, US District Judge Alison Nathan said she had excused one juror from the case because his spouse had surprised him with a planned trip around Christmas.

As a result, 12 jurors and five alternates, instead of six, will continue hearing testimony in the trial, which began on Monday and is expected to last at least six weeks.

Visoski’s testimony has provided jurors with a sense of the lifestyle Epstein and Maxwell lived between 1994 and 2004, the period in which prosecutors say Maxwell lured the underage girls for Epstein to abuse.

The pilot said he frequently shuttled Epstein and guests between Epstein’s properties in New York, Florida, New Mexico, Paris and the Caribbean islands.

Epstein’s plane has been dubbed the ‘Lolita Express’.

In her opening statement on Monday, Assistant US Attorney Lara Pomerantz said prosecutors would present flight logs that included the names of Maxwell and some of the alleged victims.

Maxwell’s defence attorney, Bobbi Sternheim, on Monday said there was nothing inherently wrong with having private jets.

The jet-setting lifestyle described in court contrasts with Maxwell’s confinement since her July 2020 arrest at the Metropolitan Detention Centre in Brooklyn, including her complaints about raw sewage permeating her cell and being served mouldy food.