Home » Meat-free diets are ‘unmanly’? Someone forgot to tell Forest

Meat-free diets are ‘unmanly’? Someone forgot to tell Forest

If eating zero meat makes you less of a “masculine” man than those who consume it, then someone forgot to tell Forest Nash.

The 29-year-old Men’s Physique bodybuilding champion and fitness trainer has never eaten meat: he was raised as an ethical vegetarian by his American parents, and became a vegan in 2015. 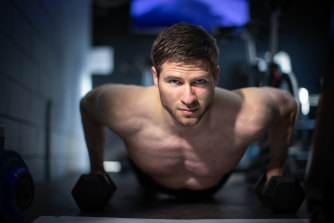 “There are a lot of misconceptions out there, myths that exist about people who are vegetarian or vegan – the stereotype that vegans are scrawny weaklings who can barely muster up the energy to get out of bed,” says Mr Nash, who moved to Australia four years ago after meeting his partner on a vegan cruise.

“I enjoy showing you can achieve fitness goals at any level on a plant-based diet; I train six days a week and train very hard. I recover very well and feel like I have high-quality energy I can put towards training and other areas of my life.”

The not-for-profit No Meat May surveyed 1000 Australian adults in March about perceptions around low-meat or no-meat diets and found men and women associate meat eating with “manliness”; 73 per cent of male respondents were so wedded to meat, they would rather live up to 10 fewer years than give it up.

No Meat May co-founder Ryan Alexander, a former meat eater, said the survey revealed how closely Australians linked meat eating with masculinity. It found many believed the more meat a man’s diet contained, the more masculine he was.

“Every year we roll out the [No Meat May] campaign and we do get a lot of resistance from men; 85 to 90 per cent of our sign-ups are women.

“The fact more than 70 per cent of men said they’d be prepared to live a shorter life is ironic as that is what some men [who eat a lot of meat] will experience: one in four men are dying from heart disease,” said Mr Alexander.

The Heart Foundation changed its dietary guidelines after a review of evidence and cut the amount of meat recommended to about 350g a week as red meat had been associated with a moderate risk of heart disease.

Though a University of Adelaide study showed in April that one in four Australians are trying to eat less meat, three-quarters of male respondents told the No Meat May survey they were not convinced of the health benefits.

About 47 per cent of people still saw eating meat as masculine – while vegetarian and vegan diets were perceived as “more feminine” by 53 per cent and 51 per cent respectively. However, Mr Alexander said there were signs more people were getting the message that lower meat intake could be healthy for the person and the planet.

About 37 per cent of men and 61 per cent of women surveyed say they are interested in reducing or eliminating their meat consumption.

Each year since Mr Alexander “challenged 30 mates to give up meat for a month” in 2013 and No Meat May began, the number of people signing up has doubled. This year, about 60,000 people have joined up compared with 34,000 last year.

Forest Nash , who competes in and has won titles in iCompete Natural bodybuilding, says he believes the link between meat and manliness probably comes down to “some ideas about how in order to be manly, you want to be strong and muscular and the idea you need to eat a lot of protein to build a lot of muscle”.

“I am definitely concerned about building muscle and being strong, and protein is a good part of my diet – but I have no trouble getting all the protein I need and more on a plant-based diet,” he says.

“I would encourage anyone sceptical to give it a go and see the results.” The planet would no doubt thank those who do, as The Economist has estimated that going vegan for two thirds of meals could cut food-related carbon emissions by 60 per cent.

Meat Eating by the No Meat May Numbers