Victoria has recorded 1377 new local coronavirus cases and four deaths as the state’s capital city officially took the mantle as the most locked-down city in the world, and exposure sites continued to grow in the state’s regions.

Monday’s case numbers are an increase on Sunday’s 1220 cases, but more than 100 off the record daily tally of 1488 recorded last week. 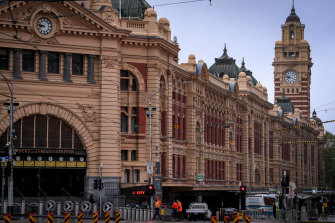 The Victorian capital has now been locked down for more days than any other city in the world.Credit:Eddie Jim

More than 30,985 Victorians rolled up their sleeves to receive a dose of a COVID-19 vaccine on Sunday, and more than 67,789 test results were processed.

By some counts, Melbourne will have been locked down for 245 days on Monday, claiming from Buenos Aires the title of the world’s most locked-down city.

Victorian Chamber of Commerce and Industry chief Paul Guerra said it was a “really sad day” and “it’s not a title that we wanted”.

“You only have to walk through the CBD of Melbourne over the past couple of months and sad is the overriding emotion.

Mr Guerra said while the city was slated for a soft opening on October 26, the easing of restrictions then would probably be of “very little” help to the economy.

“Most of the activity will be outdoors, there will be limited ability to trade indoors, and that’s not what businesses want to hear,” Mr Guerra said.

“We look north to NSW and they actually get quite a good easing at 70 per cent of double-vaccinated people, and that’s the model that, ideally, we were advocating for.

“It’s almost impossible for business to trade viably with people just outdoors … so it means that businesses are going to hang on for another couple of weeks before we get to that 80 per cent level.”

Mr Guerra said the business sector had shown time and again its willingness to do “whatever it needs” to open up again, so it would stick to any reasonable requirements to ensure customers were double-vaccinated in line with new restrictions.

“But there will be circumstances where we expect some customers will just completely refuse either the QR-coding in or the double-vaccination status,” he said.

“They’re the questions that we need answered in terms of, if you get a patron that refuses and still comes in, what does that mean in relation to the business owner?”

Exposure sites are continuing to grow in the Victoria’s regions, with multiple venues at Morwell in the Latrobe Valley and a gym at Shepparton listed as tier-1 or close contact sites late on Sunday evening.

Coles and Baker’s Delight at Bakery Hill in Ballarat were declared tier-2 sites, as was Gowrie daycare centre at Broadmeadows.