Britain has been hit by a deluge of rain this week, with more than a month’ worth of rain falling in just a few days. On Monday, Kenley saw 53mm of rainfall while on Tuesday, Wainfleet saw a staggering 76mm of rain in just the 24 hour period. Scattered showers are continuing today and into the weekend for many parts of the country, with several towns experiencing localised flooding as a result of the heavy rain.

A total of 20 flood warnings are in place, affecting cities up and down the country.

You can check whether there are any flood warnings in place near you here.

A further 64 flood alerts are in place, while28 warnings have since expired.

The Met Office had one final yellow weather warning remaining this afternoon, which covers the north east coast of England. 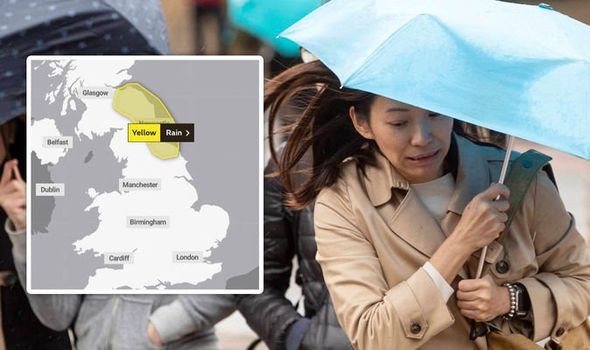 The weather agency says heavy rain may cause some travel disruption and flooding in a few places.

Met Office forecast for the next five days

Rain across England and Wales turning showery. Some brighter spells in the southeast, but also some showers.

Driest for western Scotland and Northern Ireland. Breezy and cool.

Showers and rain becoming mainly confined to the north and west for a time. Then a new area of showery rain developing over Wales and southern and central England later.

A mixture of sunshine and showers for many, with showers heaviest in the west and southwest.

Whilst temperatures still on the cool side, a warmer day than of late.

Outlook for Saturday to Monday:

Staying unsettled this weekend and into Monday with a mixture of sunny spells and showers, some heavy and thundery in places.

Temperatures recovering to nearer average over the weekend.