COPS tracked down a live WWII incendiary bomb after an amateur sleuth flagged the device to them when he spotted it  for sale on eBay.

The Nazi explosive was listed for just £15 on the online marketplace – with £4.50 delivery – with the seller claiming it was a "genuine authentic" device dropped in the Southampton Blitz. 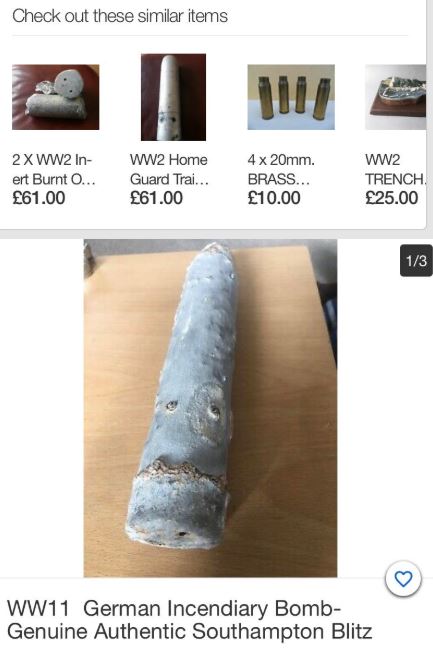 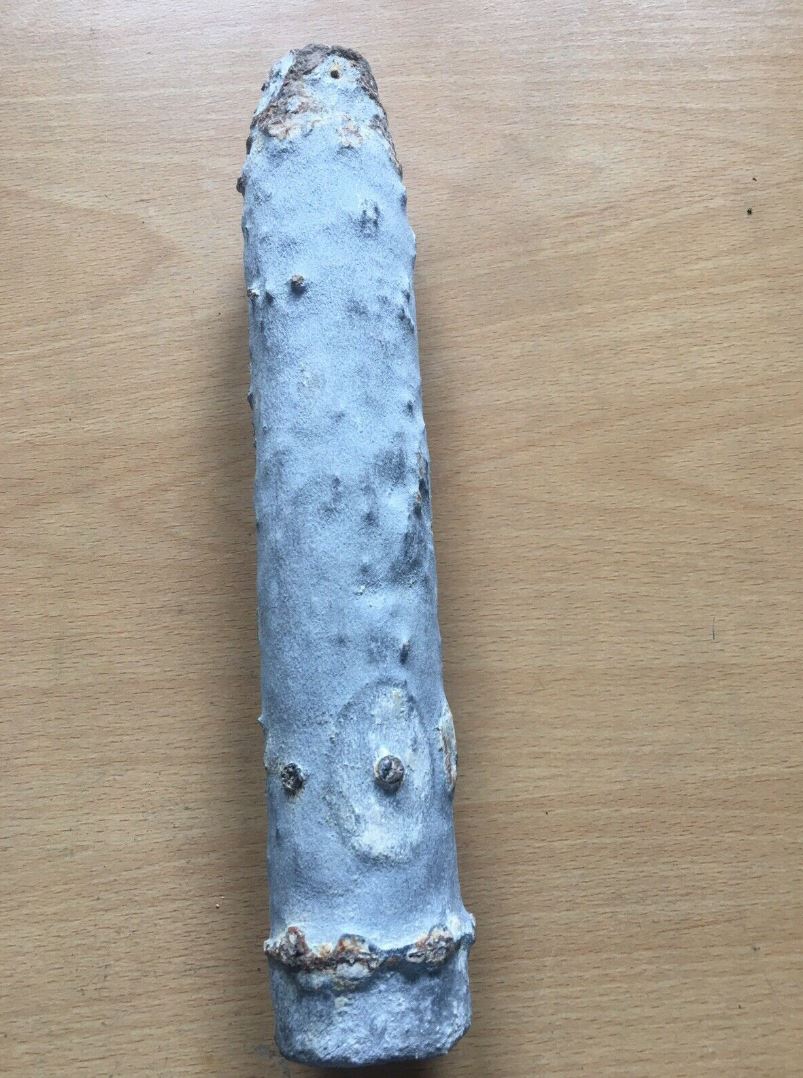 Officers hunted down the bomb after WW2 collector Ralf Sherwin spotted the item for sale on eBay and immediately reported it to the police.

At the time one person had already made a bid for the cigar-shaped bomb – which was pictured laid out on a table.

Ralf, 46, told The Sun: "I told the seller that it is live, but he continued to list it. There is thermite inside breaching the gap between the body and the nose and the air holes.

"The pitting in the body is also the thermite inside breaching the container. If it  had been left to dry out any more it could have gone off.

"Thermite is aluminium shavings and iron oxide, or rust. The out casing is made of magnesium which fuels the thermite mix. 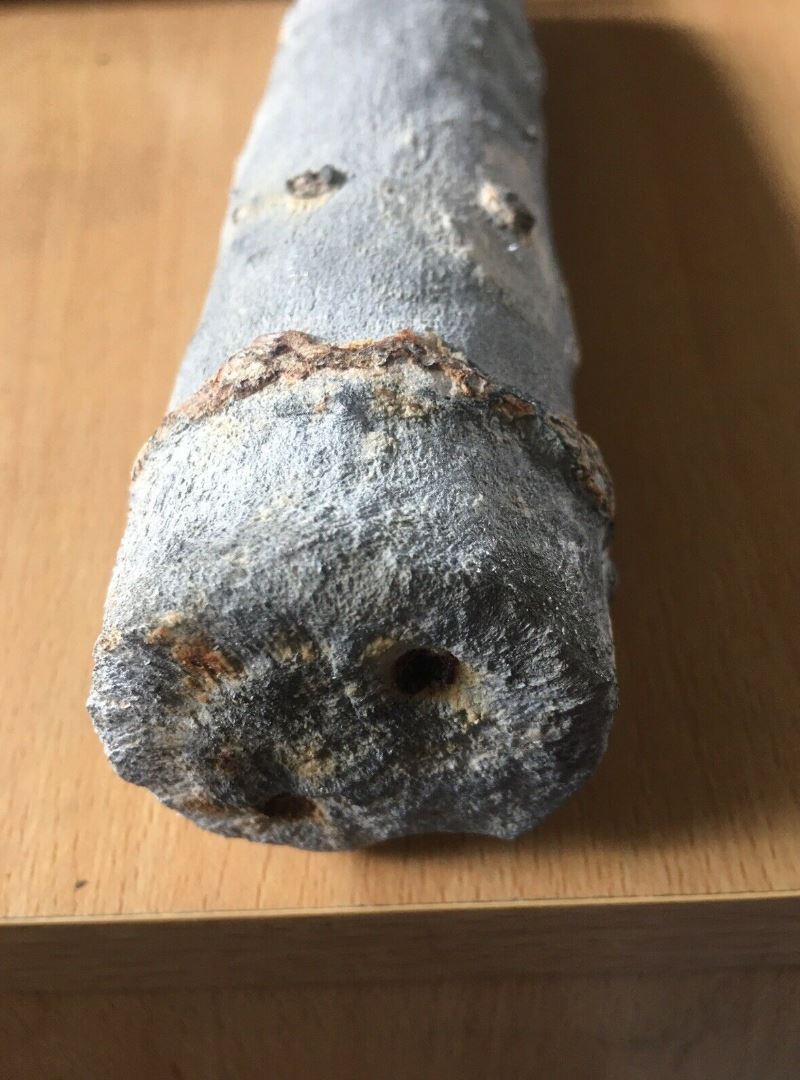 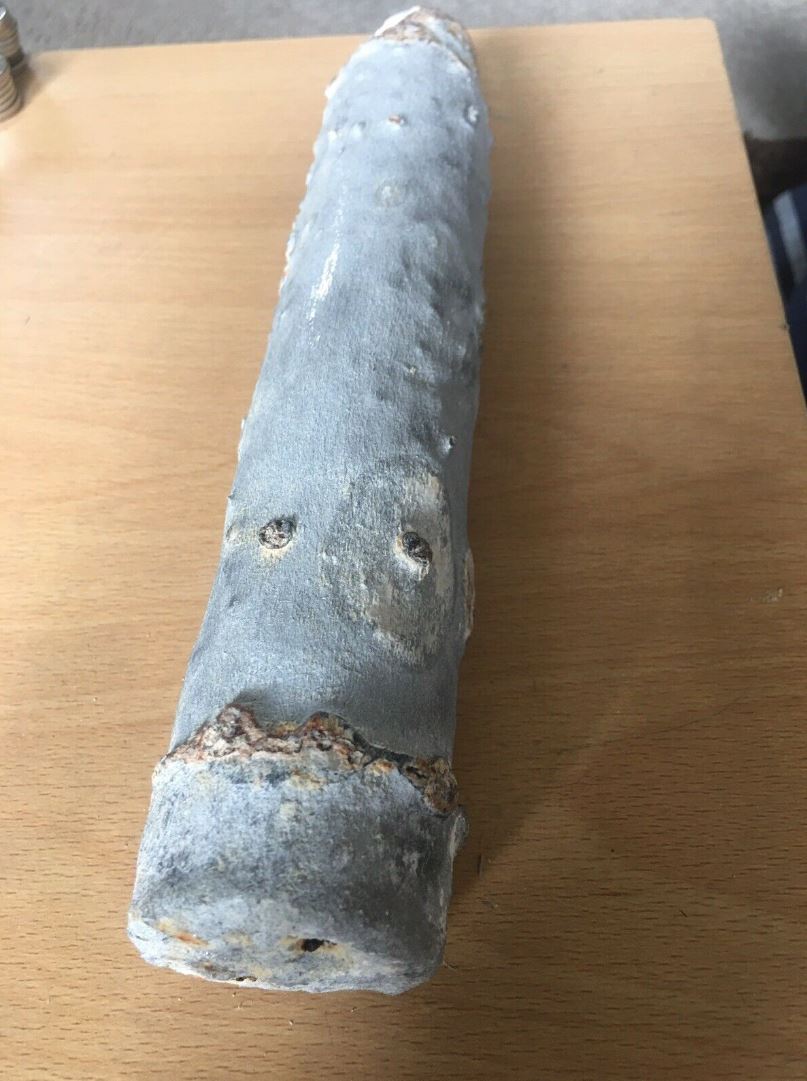 "These were also known as electron bombs in WWII. The deactivated ones you see on ebay, antiques auctions and shops were deactivated in WWII by the army.

"This one has clearly been fished out of the river in Southampton."

Thermite can burn as hot as about 4,500 degrees Fahrenheit and is capable of melting metal or rock.

After spotting the listing Ralf gave the information to Hampshire Police on Monday, and was given an incident number and contact details for an officer.

A day later officers located the bomb on Havenstone Way, Southampton, and evacuated the homes within a 50 metre cordon.

“He said he wasn't sure what it was, but he shook it and held it. He found it nearby, it was about 10 inches underground.

“He cleaned it and saw certain numbers, so googled it and it came up as a german bomb.”

Specialist explosive officers then removed the devices from the house and disposed of it with a controlled explosion.

The seller, who uses the name stick4185, even promised to send the munition using the Royal Mail.

Hampshire Police arrested a 51-year-old man from Southampton but have since released him with no further action.

A Hampshire Police spokesman said: “On Tuesday afternoon (18 May) we were called to Havenstone Way, Swaythling, after a piece of unexploded ordnance – reported to be a WW2 incendiary bomb – was discovered.

“We were made aware of the bomb after it was reported as being advertised for sale on eBay.

“A 50-metre cordon was put in place and homes within that area were evacuated for the safety of residents.

“The Explosive Ordnance Disposal team attended and transported the ordnance to the police training centre in Netley, where a controlled explosion was carried out at 4.15pm.

“A 51-year-old man from Southampton was arrested on suspicion of possessing an explosive substance for an unlawful purpose. He has been released and no further action will be taken against him.”

A spokesman for eBay said: “Clearly, dangerous weapons such as unexploded bombs are not allowed to be listed on eBay.

"We worked closely with Hampshire Police to quickly identify and locate this seller, aiding the successful and safe disposal of the item”.