Washington: The US has added a second COVID-19 vaccine to its arsenal Friday, local time, boosting efforts to beat back an outbreak so dire that the nation is regularly recording more than 3,000 deaths a day.

Much-needed doses of the Moderna vaccine are set to arrive Monday after the Food and Drug Administration authorized an emergency rollout of the vaccine developed by Moderna and the National Institutes of Health.

The move marks the world’s first authorisation for Moderna’s shots. The vaccine is very similar to one from Pfizer and Germany’s BioNTech that has already been approved in the United Kingdom and the US. 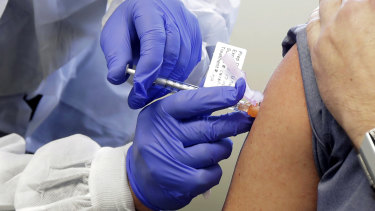 A trial participant receives a shot in the first-stage safety study of Moderna’s COVID-19 vaccine. Credit:AP

Early results of large, still unfinished studies show both vaccines appear safe and strongly protective although Moderna’s is easier to handle since it doesn’t need to be stored at ultra-frozen temperatures.

A second vaccine represents a ray of hope amid despair as the virus continues to spread unabated across the US and Europe even before holiday gatherings that are certain to further fuel the outbreak.

The scourge has killed 1.7 million people worldwide. New cases in the US are running at over 216,000 per day on average. Deaths per day have hit all-time highs, eclipsing 3,600 on Wednesday.

FDA’s decision could help pave the way for other countries that are considering the Moderna vaccine, the first-ever regulatory clearance for the small Cambridge, Massachusetts, company. European regulators could authorise its use as soon as January 6.

Britain, Canada and a few other countries already have cleared the Pfizer-BioNTech shot, with a European Union decision due Monday, local time.

Australia has not yet given final approval for either Pfizer or Moderna vaccines. A University of Queensland vaccine trial has been abandoned.

California has emerged as one of the most lethal hot spots in the US, with hospitals running out of intensive care beds and ambulances lining up outside emergency rooms in scenes reminiscent of the calamity around New York City last spring. California on Friday reported over 41,000 new cases and 300 more deaths.

When New York’s hospitals were in crisis, health care workers from across the country came to help out. This time, “there’s no cavalry coming” because so many hospitals are swamped, said Dr Marc Futernick, an emergency room physician in Los Angeles.

The nation is scrambling to expand vaccinations as rapidly as Moderna and Pfizer can churn out doses. Moderna's is for people 18 and older, Pfizer's starts at age 16.

It’s just the beginning of “what we hope will be a big push to get this terrible virus behind us, although it will take many more months to get to all Americans,” Collins said.

Even with additional candidates in the pipeline, there won’t be enough for the general population until spring and shots will be rationed in the meantime. And while health workers are enthusiastically embracing vaccination, authorities worry the public may need more reassurance to ensure more people get in line when it’s their turn.

“Frankly if we don’t succeed in getting 80 per cent or so of Americans immunised against COVID-19 by the middle of this 2021 year, we have the risk that this epidemic could go on and on and on,” Collins said.

Moderna has about 5.9 million doses ready for shipment set to begin over the weekend, according to Operation Warp Speed, the government’s vaccine development program. Injections of health workers and nursing home residents continue next week, before other essential workers and vulnerable groups are allowed to get in line.

Both Moderna’s and Pfizer-BioNTech’s shots are so-called mRNA vaccines, made with a groundbreaking new technology. They don’t contain any coronavirus – meaning they cannot cause infection. Instead, they use a piece of genetic code that trains the immune system to recognise the spike protein on the surface of the virus, ready to attack if the real thing comes along.

END_OF_DOCUMENT_TOKEN_TO_BE_REPLACED

END_OF_DOCUMENT_TOKEN_TO_BE_REPLACED
Recent Posts
We and our partners use cookies on this site to improve our service, perform analytics, personalize advertising, measure advertising performance, and remember website preferences.Ok