This is the shocking moment an angry taxi driver threw his passenger to the ground by speeding away as he climbed out of the cab after a row over face masks.

Jay Henry, who lives in Hackney, east London, had ordered a Bolt taxi to drive him to his mother’s house in Stanford Hill, north London, at around 11am on September 4.

But the 36-year-old, who works as a painter and decorator, claims he was left unable to work for weeks after suffering an injured back and foot as a result of the impact.

In the CCTV footage, the blue Toyota Pruis can be seen cruising down a residential road before swerving toward the pavement and coming to an abrupt stop.

The passenger in the back seat begins to open his door as the driver appears to turn around and speak to him.

Mr Henry continues to clamber out and places just one foot on the ground before suddenly the driver of the car speeds away.

He falls to the floor before looking over his shoulder in exasperation.

He manages to get back to his feet and walks steadily down the street in the same direction that the car drove off in.

Mr Henry then takes a moment to compose himself and rearranges his satchel before making a call. 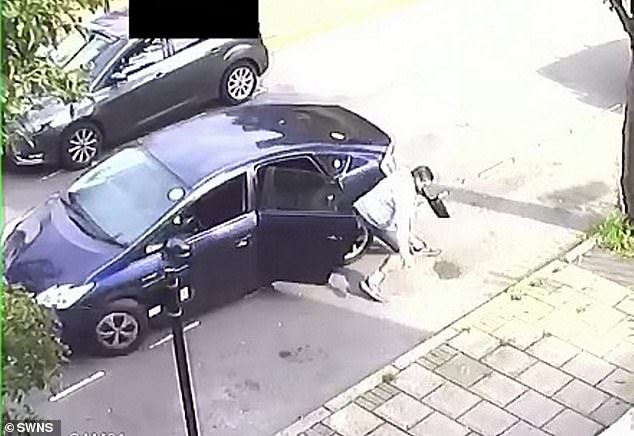 Jay Henry, who lives in Hackney, east London, had ordered a Bolt taxi to drive him to his mother’s house at around 11am on September 4 when the dispute occurred

Mr Henry said that the the driver had become upset when he arrived because he had forgotten his face mask and had to run back inside to collect it.

He claims that after setting off the driver became more erratic, dangerously overtaking a learner driver and jumping red lights.

The Metropolitan Police confirmed they are investigating an allegation of assault against the cab driver who was working for the Bolt ride-hailing app at the time.

Speaking after the incident, Mr Henry said: ‘I ordered a cab, but I forgot my mask and had to go back upstairs to get it. I ran back down, put it on and he [the driver] started saying “you think I’m your slave”. 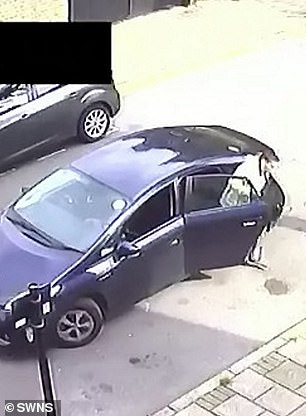 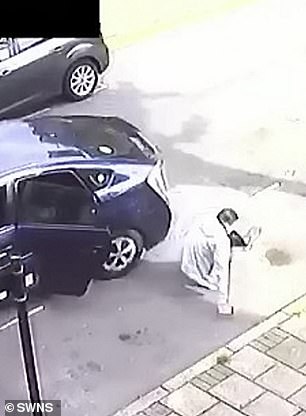 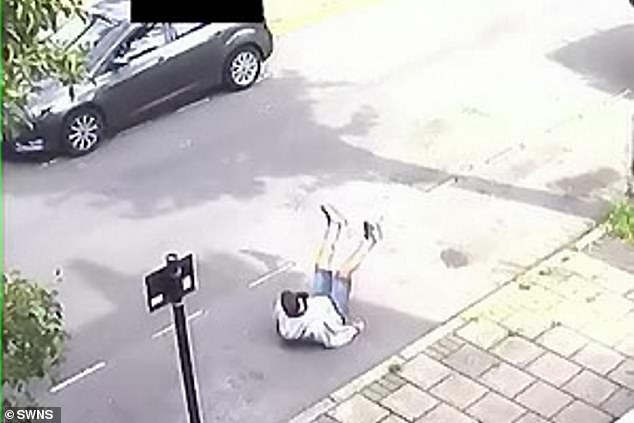 The 36-year-old, who works as a painter and decorator, claims he was left unable to work for weeks after suffering an injured back and foot as a result of the impact

‘I said “please just drive the car, we’re going to be late, I didn’t say anything like that”.

‘When he started driving he was going like an absolute madman, he jumped two red lights. He overtook a learner doing a test or a lesson. The way he overtook them was ridiculous.

‘I said to him “you don’t like your job, maybe get a new one”. And I said “maybe clean your car, you might feel better”. This Bolt was filthy.’

‘The door was still open as he flew off, I fell heavily on my back and my foot bent under me. My trainer ripped in half from falling to the floor.

‘My back is still playing up, my big toe is still bad. I’ve not been back to work since because it hurts too much.

‘I should have gone to hospital at the time but I didn’t think I should, I didn’t want to waste their time, and because of coronavirus.’

Scotland Yard said officers are investigating an allegation of assault and that so far no arrests have been made.

A spokesman for the police said: ‘An allegation of assault was reported to police shortly after 11.00am on Friday, September 4.

‘It was reported that a man was injured after he was dragged along the ground a short distance, when a private hire vehicle he had been travelling in, drove away as he was exiting the vehicle in Lockhurst Street, E5.

‘There have been no arrests. Enquiries continue.’

END_OF_DOCUMENT_TOKEN_TO_BE_REPLACED

END_OF_DOCUMENT_TOKEN_TO_BE_REPLACED
Recent Posts
We and our partners use cookies on this site to improve our service, perform analytics, personalize advertising, measure advertising performance, and remember website preferences.Ok