Up to 50 per cent of office workers can start returning to their desks from Monday, without being required to wear a mask indoors, after Victoria recorded its eighth consecutive day of zero community transmission of the coronavirus.

Premier Daniel Andrews announced on Thursday morning that mask-wearing rules will again be relaxed from 11:59pm on Sunday. 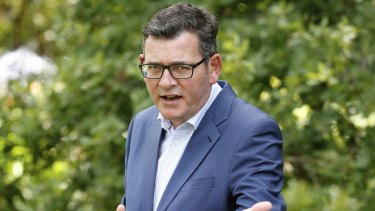 Welcome back: Victorian Premier Daniel Andrews says up to 50 per cent of CBD workers can return to their offices from Monday.Credit:Darrian Traynor

Face masks will only be required to be worn inside supermarkets, shopping centres, public transport and other high-risk settings.

Mr Andrews said Victoria's eight days with no community transmission of the novel coronavirus was a tribute to Victorians.

"To get to this eight days in a row of zero is no small thing and it's a credit to all of our public health team and a credit to all Victorians who play their part in doing so," he said.

The return-to-work schedule was pushed back last Wednesday, when there were 28 active cases of COVID-19, and a man with no apparent link to the Black Rock cluster was diagnosed with the virus.

From Monday, up to half of all private sector workers can begin working from their desks again, while Victoria’s public service, the city's largest employer, can bring back up to a quarter of staff.

Mr Andrews said the government had capped the return of public servants at a lower setting to give the private sector more capacity to bring workers back.

The news will be welcomed by many thousands of Victorians who have been working from makeshift home offices since March.

However, the Victorian Chamber of Commerce expects the return to be a slow, drawn-out process and major employers including NAB, Westpac and ANZ have said their staff will return in stages, mostly from next month.

As The Age revealed on Wednesday, a Fair Work Commission survey found that only 5 per cent of workers want to return to the office full-time.

The survey of 322 users of the social media site LinkedIn by researchers at Swinburne University found that 35 per cent of participants would prefer to work from home every day and a majority would like to split their time between home and office.

One of the report's authors, John Hopkins, said most employers were developing plans to allow flexible work arrangements but in some cases, they were insisting workers return to the office full-time.

Industrial lawyers have warned workers could be sacked if they refuse a request from their employer to return to the office once their workplace is deemed safe and the Victorian government relaxes restrictions on attendance.

Pre-COVID, almost half the estimated 1 million people who travelled into the CBD every day did so for work, leaving CBD businesses heavily reliant on office workers for financial survival.

Since Australia shut its borders in March, applications by foreign citizens to study in Australia have collapsed by more than 80 per cent. The number of international students is expected to be half its pre-pandemic total by mid 2021.

END_OF_DOCUMENT_TOKEN_TO_BE_REPLACED

END_OF_DOCUMENT_TOKEN_TO_BE_REPLACED
Recent Posts
We and our partners use cookies on this site to improve our service, perform analytics, personalize advertising, measure advertising performance, and remember website preferences.Ok