Reclusive hoarder, 75, whose mummified body was found among piles of cigarette packets, beer cans and bottles of urine may have lay dead in his house for a year, inquest hears

A reclusive father-of-four lay dead inside his barricaded and cluttered home for a year before his ‘mummified’ body was found, an inquest has heard.

John Arthur Noble, 75, was found dead at his run-down home in Huddersfield, West Yorkshire, in April after neighbours told police they hadn’t seen him for 12 to 18 months.

An attending paramedic estimated that Mr Noble may have been dead for more than 12 months when he was found due to the ‘mummified’ state of his body.

The inquest heard that the front door of his home in Golcar Brow Road, Meltham, was blocked by a large pole that formed a makeshift barricade.

A police officer found Mr Noble’s body next to a settee, with the property full of containers of urine, discarded food, cigarettes, beer bottles and videotapes. 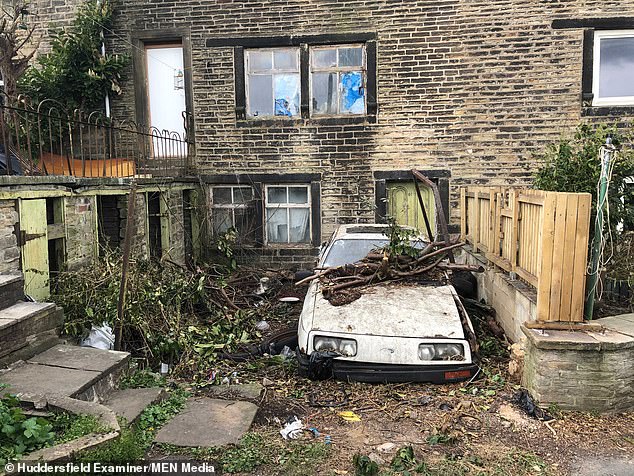 An attending paramedic estimated that recluse John Arthur Noble, 75, may have been dead for more than 12 months when he was found due to the ‘mummified’ state of his body

The officer said: ‘John was in a state of what I can only describe as mummification.

‘I conducted a search of the property to find many rooms full of items of food, beer and videotapes.

‘I went through the house where there were several containers with urine in them. These were all downstairs around the house.

‘At the front door, he had placed a long wooden pole inside the property to block the door shut.

Detectives were called in and later ruled out any suspicious circumstances.

Neighbours told police they only saw Mr Noble when he collected shopping deliveries at his front door.

One neighbour stated that she had raised concerns about Mr Noble several years ago but nothing was done as he was deemed to have capacity, the inquest was told.

Mr Noble’s brother, Roy, who attended the house after the body was found, told police he had seen his brother a year ago and he would not answer the door to anyone.

Roy said he had to talk to his brother through the letterbox. He said his brother had problems with local youths who had often damaged the windows which had then been boarded up.

Roy said his brother had split up with his partner 30 years ago and had then become a recluse and isolated himself more. 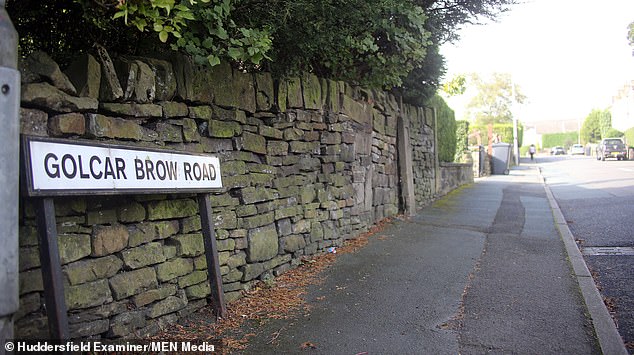 Mr Noble was found dead at his run-down home in Huddersfield, West Yorkshire, in April after neighbours told police they hadn’t seen him for 12 to 18 months

In a statement Mr Noble’s son, Gary, said he was estranged from his father. He said his father, a former labourer, hadn’t worked for many years.

Gary said: ‘I had not seen him for 29 years. My father sadly pushed people away due to his drinking and also his mental health issues.

‘I cannot offer much information about my father as we have had no contact for the last 29 years.

‘My mother and father split up over 30 years ago and when they first split I did try to maintain a relationship with him but all he ever did was push me away and that meant having no relationships.

‘From what I have learned since my father’s death is that he was a recluse. He never really saw anyone and he had no friends.

Gary said his father had also previously told social services ‘where to go’.

Gary said: ‘My father didn’t see anyone at all except the Sainsbury’s delivery driver.

‘My father was a heavy drinker and a heavy smoker and he had a very poor diet from what I could see when I went to clean his house.

‘The walls were stained yellow and there were hundreds of empty cigarette packets.

‘I would describe him as living in squalor and being a hoarder. My father had no contact with anyone I know of and I am unaware of anyone being able to offer any information about his life.’

A report by Mr Noble’s GP said: ‘Mr Noble has a long history of mental health difficulties dating back to the 1970s.

‘However, he does not seem to have been on any medication pertinent to his mental health for about 20 years.’

The coroner, Martin Fleming, recorded a narrative conclusion. He said a post-mortem examination was unable to establish the cause of death because of the advanced state of decomposition.

Mr Fleming said: ‘Very sadly in this case, after the split with his wife some 30 years ago John became something of a recluse, shunning family, friends and neighbours, along with any possible help from doctors and social services.

‘I’ve heard it was extremely uncommon for his neighbours to see him as he very rarely, if ever, left his home address.’

Mr Fleming added: ‘There is clear evidence that John was not looking after himself and self-neglecting.

‘This is such a sad case. It’s clear that John needed help. It’s clear he was self-neglecting but it remains unknown if this caused or contributed to his death.’

Mr Noble’s other son, Gavin, who attended the inquest, told the

hearing: ‘The ending to this tale was one, as a family we always knew would turn out this way because of how he was, and his behaviour.

‘We didn’t have a great childhood with him so I don’t feel any grief at his loss, to be honest.

‘Today was just about getting a little bit of closure and being able to register the death and get on with processing the estate.’

Mr Fleming told Gavin: ‘The great sadness and tragedy here is that John felt the need to live his life in such a very sad way, to the exclusion of others. That is very sad indeed.’