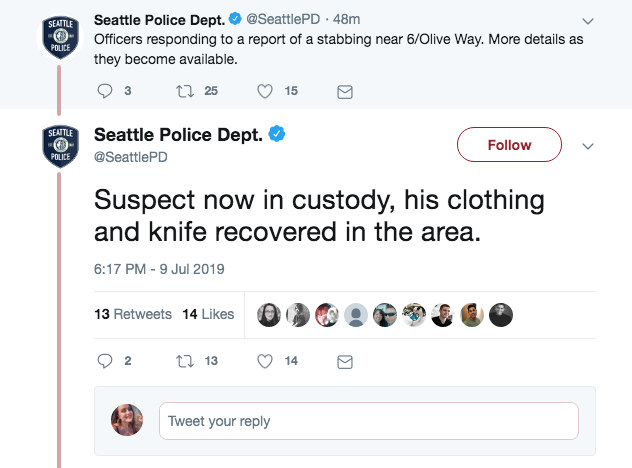 In a statement, Seattle Police said: “Three people were injured in a stabbing in downtown Seattle on Tuesday before police arrested a nude man and recovered a knife.

“Just after 10 AM, police received reports that a man had stabbed three people near 6th Avenue and Olive Street.

“One of the victims ran into a nearby store while the suspect fled the scene. Officers took the man into custody near 8th Avenue and Pine Street. Police also recovered the knife and the man’s clothes, which he had stripped off as he ran from officers.

“Both were transported to Harborview Medical Center and are in stable condition. A third man, believed to be between 55 and 60 years old, was stabbed in the forearm and was treated at the scene but declined further assistance.”

According to Seattle police, a third person was treated at the scene but declined to be taken to hospital.

Emergency services have placed a cordon around the area as they work to hose down the area.

Roads and bus lanes around the area were temporarily closed but have now re-opened to the public.