‘Need for humility’: World leaders’ messages between the lines

Tokyo: Leaders around the world are cautiously watching US Democrat presidential candidate Joe Biden strengthen his path to the White House after taking the lead in Georgia and Pennsylvania, but many have chosen to make nuanced comments that appeared to favour trust in American democratic institutions over fraud claims.

Some have even been more direct in suggesting President Donald Trump be a good sport. 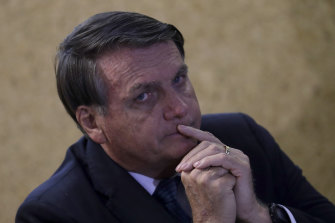 Trump is not the most important person in the world”: Brazilian President Jair Bolsonaro.Credit:AP

Officials and newspapers around the world lamented the polarisation and dysfunction in the world's oldest Western democracy.

Amid the unease, though, some commentators also marvelled at the strength and transparency of the US election system and efforts to count every vote — even as coronavirus cases spike.

Some, like Scotland's First Minister Nicola Sturgeon, were indirect but clear in their meaning. After Biden pulled ahead in Pennsylvania, Sturgeon tweeted, "The world can be a dark place at times just now — but today we are seeing a wee break in the clouds". 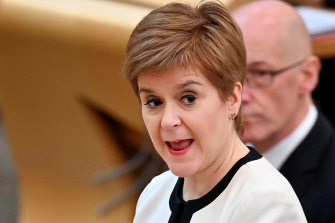 Italy's former prime minister Matteo Renzi wrote on Twitter that Biden "will be a great President of the United States. He is a wise and balanced person: he knows how to lead the strongest nation in the world in these difficult times."

British Prime Minister Boris Johnson told Sky News: "If I were a voter in America I don't think I'd want anybody in another government commenting on my election. But he did say he had full confidence in the US Constitution's checks and balances.

Prime Minister Justin Trudeau, speaking to reporters in Ottawa, said Canada would be "very cautious" about how and when to offer congratulations to an eventual winner and expressed "faith in the American people and the American institutions to have elections take place properly".

Mexico's President, Andres Manuel Lopez Obrador, said he could not issue a statement. He'd "only make a declaration once the US authorities decide" on the winner.

There was also the lingering sting from the drawn-out battle to decide the US election in 2000 when some messages of congratulation were sent, rescinded and eventually sent again.

The disruptions in normal protocols were another blow to the global image of America and the potential damage to its flawed but nevertheless admired model of democracy. The country's retreat into nationalism and break from global institutions and norms under Trump will not be soon forgotten in many capitals and could saddle Biden with the task of rebuilding trust.

In Germany, Foreign Minister Heiko Maas was more direct, he criticised Trump's reluctance to accept the election results and said the United States was not a "one-man show".

He said in an interview with Germany's Funke media group: "Decent losers are more important for the functioning of a democracy than radiant winners."

Norbert Roettgen, chairman of the German parliament's foreign affairs committee, said on Twitter that Trump was "disregarding the foundations of democracy with his behaviour". He added: "Should he lose, he will not remain in the White House, but he also will not accept defeat.

"He cares about public opinion – he is ready to poison everything for that."

Former Japanese prime minister Shinzo Abe, who struck up a close friendship with Trump, expressed concern over the wider fallout of the "turmoil and confusion because of the election".

"A minus for its allies and like-minded countries," Abe said in an interview with the Yukan Fuji newspaper.

London Mayor Sadiq Khan, who has frequently clashed with Trump in the past, reiterated his support for Biden.

"Clearly I'm rooting for Joe Biden because I'm hoping that the next President of the USA is somebody who's not obsessed by hate-filled policies," Khan told BBC Radio London.

News outlets abroad were similarly alarmed. Britain's Economist weekly said Trump's "populism will live on in America". Even if a Biden administration were to restore alliances, it said, "everyone will know that it could all revert again in 2024".

The left-leaning Guardian reflected in an editorial on the "deep weaknesses" in American democracy and how it painted a bleak picture ahead, suggesting that the possibility of a Democratic-controlled White House and a Republican-majority Senate spelled more gridlock and acrimony.

In Germany, Donald Trump jnr's call on Twitter for a "total war" over the election struck with particular resonance. Bild, the country's biggest tabloid, said the "words brought back memories of the infamous speech by Hitler's propaganda minister Josef Goebbels" when he called for "total war" as Germany lost the upper hand in World War II.

While some around the world poked fun at the slow-moving US vote count, others appreciated the strength of the system. "We can all joke about how painfully long America is taking to count its votes. But it also underlines that every vote actually counts in their system," said Nidhi Razdan, a journalist in India.

American media also drew praise in India from commentators for calling out Trump's falsehoods about the election being stolen from him. "A media with a spine telling truth to power! Salute!" said journalist Rajdeep Sardesai.

Meanwhile, government officials and citizens around the world pondered the implications of a potential Biden presidency.

Turkish Foreign Minister Mevlut Cavusoglu broke his government's silence on the election cliffhanger, saying the country's relations with the United States were "above politics" and that NATO-ally Turkey has "worked with Democrats and Republicans". But Turkish President Recep Tayyip Erdogan, who has developed a close personal relationship with Trump, could face a testier relationship with Biden, who has called Erdogan an "autocrat".

A leader of Jewish settlements in the West Bank, Yossi Dagan, said a Biden victory does not necessarily mean the end of efforts to annex the communities into Israel proper. Biden strongly opposed the annexation plan and is expected to take a much dimmer view than Trump of any expansion of the settlements.

Dagan said he expects Biden to be too preoccupied with the US coronavirus crisis to pay much attention to the settlements, but he added that Israel must present a strong front to the new administration.

Across the Middle East, people created entertaining memes and videos about the election, forwarded en masse to their contacts on WhatsApp. Various iterations of the same meme circulated: Arab men standing around, drably cracking sunflower seeds in an image overlaid with the text, "Arabs following the US election drama knowing whoever gets elected is gonna bomb their region anyway."

China's government, which has largely remained silent about the election in recent days, struck a conciliatory note. Vice Foreign Minister Le Yucheng said he hoped the next US administration would work with China on issues of mutual interest.

"Despite disagreements between the two countries, there are broad common interests and space for cooperation," Le told reporters during an appearance at a Shanghai Cooperation Organisation meeting in Beijing. "We hope the new American administration will meet the Chinese side halfway to focus on cooperation and manage differences."

The remarks from Le, a Foreign Ministry official who has been an increasingly prominent Chinese voice on relations with the United States, were characterised by some Chinese state media as an olive branch to Washington.

Hong Kong Chief Executive Carrie Lam told a news conference that she hoped the United States could "come back to normalcy," and she repeated criticism of Washington for "interfering" in Hong Kong and China's affairs. Lam is among officials under US sanctions for eroding the rights of Hong Kong people.

Denmark's former prime minister, Lars Løkke Rasmussen, tweeted a picture of himself walking away from the office, a backpack slung over his shoulder, on his final day last year after his party lost parliamentary elections. "The way to leave office with honor," he wrote. Later Friday, he tweeted "congratulations President-elect @JoeBiden."

Understand the election result and its aftermath with expert analysis from US correspondent Matthew Knott. Sign up to The Sydney Morning Herald‘s newsletter here, The Age‘s here, Brisbane Times‘ here and WAtoday‘s here.

END_OF_DOCUMENT_TOKEN_TO_BE_REPLACED

END_OF_DOCUMENT_TOKEN_TO_BE_REPLACED
Recent Posts
We and our partners use cookies on this site to improve our service, perform analytics, personalize advertising, measure advertising performance, and remember website preferences.Ok