Signs emblazoned with the words "we will not be replaced" were proudly displayed by members of the Patriotic Alternative before some posted vile abuse aimed at Three Lions football stars on social media. 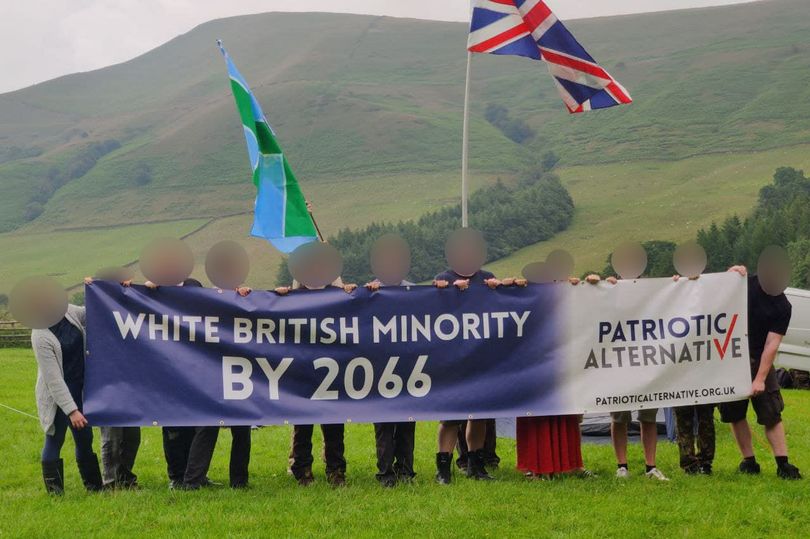 Parents even took their children to the 150-strong get-together where they "had a waterbomb fight and played football and hide and seek".

Later that evening, after England lost to Italy in the Euro 2020 final, some PA supporters broadcast racist abuse towards several players on heavily encrypted messaging software Telegram, The Mirror reports.

They were among hundreds of racist morons who began attacking three of the team's black players with monkey emojis and vile abuse.

The PA members directed their hate speech at Marcus Rashford, Jadon Sancho and Bukayo Saka, whose penalties were either missed on saved on July 11.

Far-right watchdog Hope not Hate said PA "preaches an ideology that leads to violence" – but PA's deputy leader Laura Towler claimed the group is a "family-focused organisation" that "gives young nationalists a positive direction in life".

Researcher Joe Mulhill said: "Patriotic Alternative preaches this gospel that white people are under attack and being replaced.

"Some people listen to that message and say, ‘I need to go on a march or do a banner drop.’

"Others hear it and say, ‘We need to get active.’ It means engaging in hate speech."

Laura, an open critic of the Black Lives Matter movement who opposes taking the knee, also insisted there is "no such thing as hate speech" but posted "diversity quite literally lost them the cup" after England's defeat.

Other members of the group posted racist slurs online after the match, including one with the pseudonym Ayatollah and another called Charlie Big Potatoes.

PA's leader Mark Collett, 40, is a Holocaust denier and former chairman of the British National Party who has said he admired Adolf Hitler.

He also described AIDS as a "friendly disease because blacks, drug users and gays have it" in Channel 4 documentary Young, Nazi and Proud.

His 'summer camps' are an opportunity to "groom his young followers" and "give people who are racist online somewhere in the real world where they can spout their bile", according to investigative group Red Flare.

Lewis Hamilton was sent horrendous comments after his controversial victory at the British Grand Prix on Sunday.

The 36-year-old was hit with a 10 second penalty after he collided with F1 title rival Max Verstappen on the first lap and sent him crashing into the wall at 180mph.

Medics sent the Dutchman, 23, to hospital as a precaution after he had gingerly exited the mangled car.

Red Bull boss Christian Horner angrily castigated the Mercedes driver, who recovered from the setback to win the race after a late overtake of Charles Leclerc.

And Verstappen was left seething after watching Hamilton's celebrations in front of the 140,000 fans from hospital.

It has now emerged that after his victory, the legendary driver received messages on Instagram that included monkey emojis.

A joint statement from Formula 1, the FIA and the Mercedes-AMG Petronas F1 Team said: “During, and after, yesterday’s British Grand Prix, Lewis Hamilton was subjected to multiple instances of racist abuse on social media following an in-race collision.

“Formula 1, The FIA and Mercedes-AMG Petronas F1 Team condemn this behaviour in the strongest possible terms.

“These people have no place in our sport and we urge that those responsible should be held accountable for their actions.

“Formula 1, the FIA, the drivers and the teams are working to build a more diverse and inclusive sport, and such unacceptable instances of online abuse must be highlighted and eliminated.”